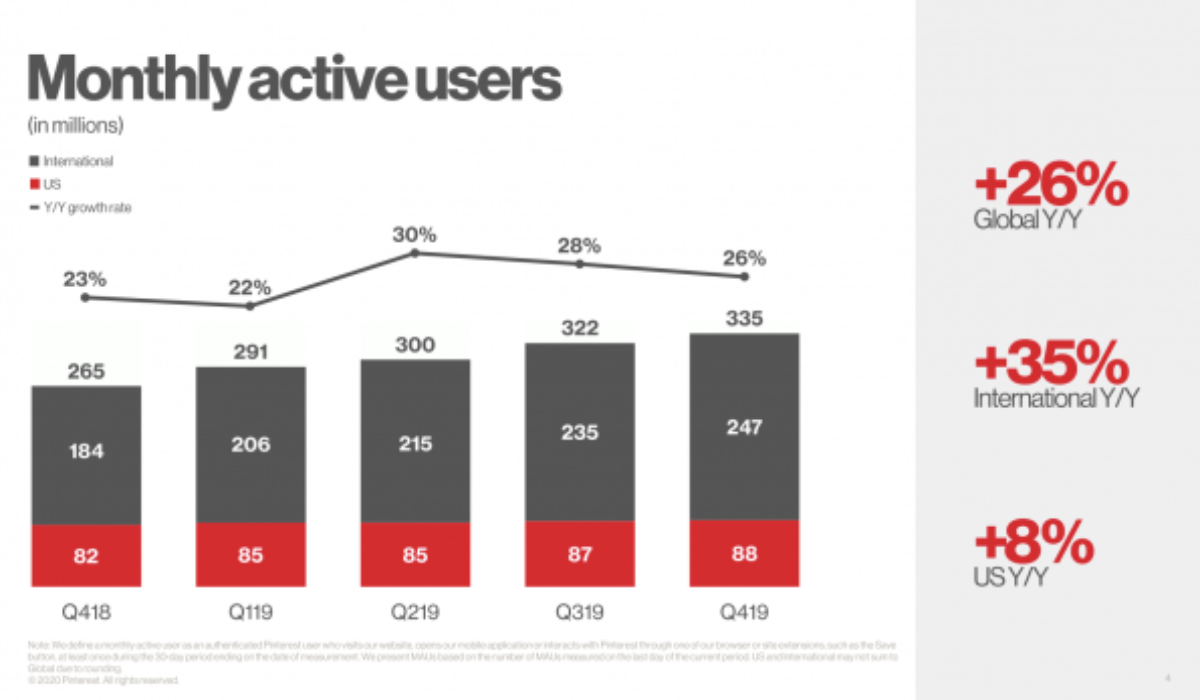 We’ve rounded up the most important Pinterest stats, including proprietary data from Pinterest itself, so you can see how your marketing efforts measure up in 2020. Together, they’ll give you a sense of how Pinterest’s user stats compare with other platforms, which advertising tools drive the best ROI, and what’s trending in search.

More than 200 billion pins have been saved on Pinterest. How many of them are yours?

Here are the Pinterest stats you’ll want to pin to your next marketing vision board. [contenupgrade]

Last year was a banner year for Pinterest. A billion-dollar year, in fact. See how Pinterest stats measure up against other social media networks and beyond.

More than half of Pinterest’s MAUs are weekly active users, which means they log-on to the platform at least once a week.

2. Pinterest is now the third-largest social network in the U.S.

Pinterest now has 88 million MAUs in the U.S., marking an 8% year-over-year growth. The stats, which were announced February in the company’s Q4 earnings call, blew most analyst estimates out of the park. In fact, eMarketer had projected Pinterest would close 2019 with 82.4 million U.S. users, ahead of the 80.2 million estimated for Snapchat.

Snapchat did not release MAU figures, but reports 86 million daily active users for Q4 2019. TikTok is gaining on both platforms, with 80 million MAUs in the U.S.

Pinterest became a billion-dollar business last year, earning $1.14 billion in total revenue. The platform’s revenue grew 51% between 2018 and 2019, thanks in part to a 46% spike around the end-of-year holidays. Pinterest also attributes its growth to an increase in demand from new advertisers and advances in its conversion optimization products. 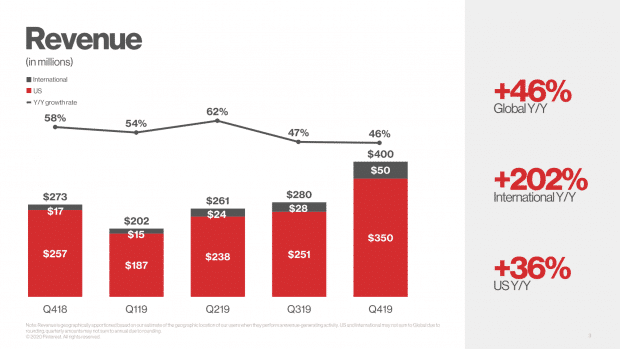 4. Pinterest rates as the 10th most relevant brand in the U.S.

Last year’s Prophet Brand Relevance Index put Pinterest in 10th position, behind companies like Apple, Spotify, Android, and Disney. It’s the only social platform to crack the top ten. It also ranks as #1 in the survey’s “Makes me feel inspired” and “Engages with me in new and creative ways” categories.

.@Meghan_Trainor PLS send us the board you brought to life for your new video ????????https://t.co/eGG4tppexO

Pinterest’s audience may not be as vast as Facebook’s, or as teen-targeted as the Snapchat and TikTok crowd. More than anything, Pinterest is preferred by women. That’s particularly noteworthy since women influence 70-80% of consumer spending. Use these Pinterest user stats to get to know the platform’s demographic dynamics.

More than two-thirds of Pinterest’s base is women. And according to a recent study by ComScore, more than 80% of U.S. women ages 18-64 with children use Pinterest. In other words, 8 out of 10 moms are Pinners.

That doesn’t mean marketers should forget about men. Men still make up more than 20% of Pinterest’s ad audience.

6. More than half of Pinterest users are based outside the U.S.

The release of Pinterest’s S-1 for its IPO in March last year showed analysts that Pinterest has solidified a strong user base in the United States. It also showed investors that future user growth will likely take place overseas.

According to a Pew Research study, the majority of Pinterest users earn more than $75,000 USD a year. That means more often than not, people who use Pinterest have a disposable income.

Likewise, U.S. adults with college education are twice as likely to use Pinterest than those with high school or less. 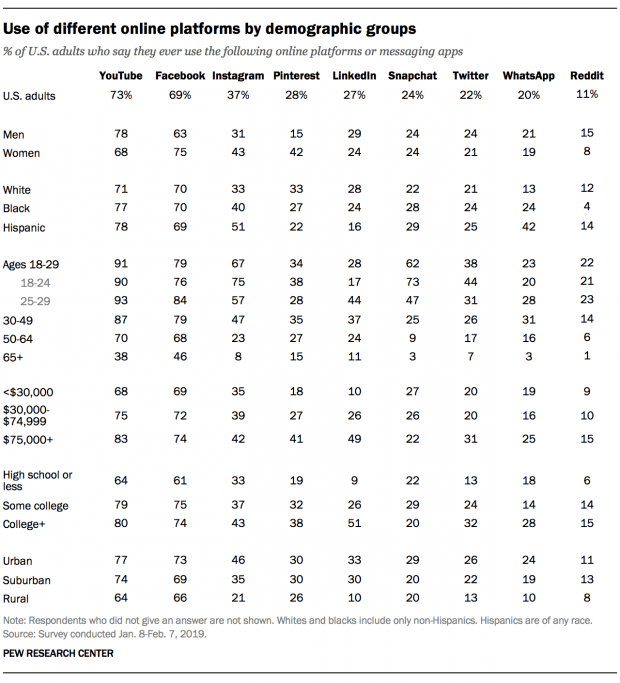 Knowing what makes a Pinner Pin is often what separates a good marketing strategy from a bad one. Whether you’re looking for more followers or more sales, these Pinterest stats should guide your efforts.

9. There are more than 2 billion searches on Pinterest every month

The average Pinner types in eight Pinterest searches every month. It all adds up to more than two billion searches, and more than 200 billion Pins saved to more than four billion boards across the platform.

Visual search is on the rise. Roughly 62% of GenZers and millennials would like to be able to search by image. And as the only social network that offers the option, Pinterest is poised to benefit.

Searches on Pinterest Lens, its browser extension and visual search tool, increased by 140% between 2017 and 2018. As Lens gets sharper, this figure will undoubtedly grow. So far it can already identify more than 2.5 billion objects across home and fashion pins.

Pinterest also just announced a new Lens-powered feature called Try On. The tool uses augmented reality to let Pinners “try on” the items they see in Product Pins, like lipstick. Businesses with a product catalog can request to try it. 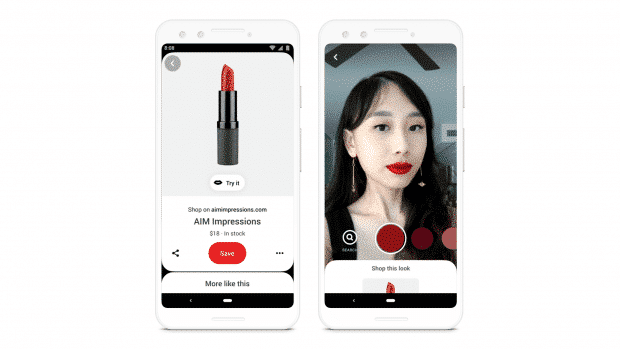 As Pinterest software engineer Jenni Liu explains, “If you’ve ever heard someone mention ‘the Pinterest Rabbit Hole,’ they’re likely referring to Related Pins.” Related Pins are the relevant pins that show up beneath a Pin a user has tapped on.

How can marketers make their pins show up here? In addition to relevance, Pinterest prioritizes fresh content when fetching related pins to show. So beyond using strong keywords, marketers should aim to post regularly.

Learn how to schedule pins from Hootsuite’s dashboard.

In 2020, visuals go well beyond static images. Pinner engagement with video continues to rise, which may be why Pinterest recently added new ways for people to react to them.

Show Pinterest creators love with our new reactions! Hit the ???? icon and react to your favorite videos on Pinterest ????

According to a 2017 Pinterest study, storytelling and how-to’s are the most popular video formats. The same study found that 67% of Pinners say video inspires them to take action. Meanwhile, a more recent study found that people watch Promoted Videos 32% longer when a storyline is developed over time.

Pinners come to Pinterest to shop. Learn how to turn them into loyal customers with these Pinterest stats.

Why does this matter? It means that Pinners are open to discovering new products and ideas. Not only that, 78% of Pinners think content from brands is useful.

And the content doesn’t have to be from brands they know. In a 2019 survey, three-quarters of Pinners say they’re “very interested” in new products. That’s much higher than the 55% of users on other digital channels.

And Pinterest makes it happen. Some 77% of weekly Pinners say they regularly discover new brands and products on the platform. More than that, 98% of Pinners have tried things they find on Pinterest, and 83% have made purchases based on brand content.

15. Shopping is a top priority for 48% of Pinterest users

Pinterest is more search engine than social network, and Pinners act accordingly. At 48%, shopping is a top activity for Pinterest users, ranking just after viewing photos (57%). Sharing content, networking, and news all rank as lesser priorities.

This comes in stark contrast with other social media sites. For Facebook, shopping ranks as the 7th most popular activity at 14%. Same goes for Instagram, Snapchat, and Twitter, which all see lower shopping rates. 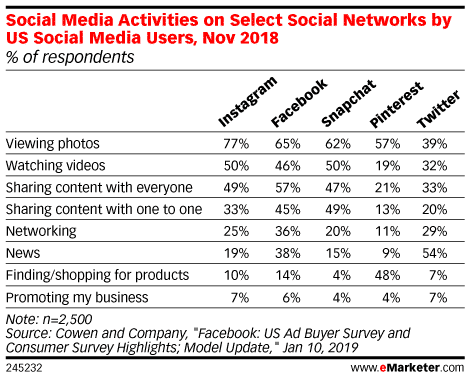 16. 85% of Pinners put visuals first when shopping for apparel and furniture

No matter how witty your copy is, it won’t be read without an eye-catching visual. Remember, Pinners start by window shopping, with pins subbing for real-life storefronts.

But visual search also plays a role in stores, too. According to Pinterest, 61% of consumers say image lookup improves their in-store experience. Some 55% say visual search is key to helping them refine their style, and 49% of Pinners say that it improves their relationship with the brands they love.

On Pinterest, the end-of-year holidays truly are the most wonderful time of the year. More than three billion holiday-themed pins are saved every year, with search terms like “Christmas decorations” and “winter outfits” surging in popularity.

Pinterest is one of the only places on the Internet where people actually don’t mind ads. If you plan to advertise this year, here are the Pinterest stats you should know.

18. Advertisers can reach more than 169 million people on Pinterest

Pinterest’s quarter-on-quarter change in advertising reach went up by 12% last year, and will likely continue to rise this year. Part of the increase is the result of Pinterest adding more countries to its ad targeting portfolio.

Still, more than 79.4 million people are based in the United States, representing roughly 47% of the platform’s ad audience. The U.S. is followed by Germany, France, U.K. and Canada.

Women in this age group nearly double the second-largest ad audience on the platform. Overall, women make up 71% of Pinterest’s ad audience, versus 21% for men (the other 8% did not specify gender).

20. The number of active advertisers on Pinterest doubled in 2019

The spike in advertisers says a lot about the effectiveness of Pinterest ads—especially since average revenue per user (ARPU) went up in 2019, too. Up 15% from 2018, ARPU grew to $1.22 last year.

More advertisers mean more competition. Step up your Pinterest ads with these tips.

Pinterest attributes this growth to improvements in its dynamic retargeting product, which had a “particularly strong uptake and performance” in the third quarter of 2019.

22. At $4.00 ARPU, Americans are the biggest spenders on Pinterest

The average revenue earned per U.S. user went up 26% in 2019. Americans significantly outspend international users, who average a spend of $0.21.

It’s worth noting that many international ad markets are in their early stages—with several new countries added last year. As Pinterest’s Q4 2019 letter to shareholders explains, “We have only begun to execute on our strategy to provide ads … to our users in regions outside of the U.S.” 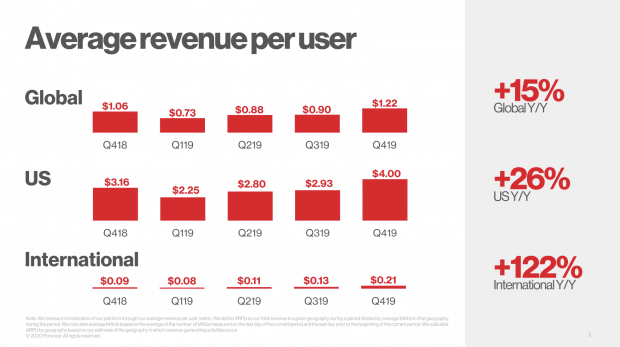 23. Promoted pins that align with life moments and holidays see a 22% lift in sales

It’s a good idea for Pinterest marketers to use a social media content calendar to time campaigns with holidays. But be aware that Pinners like to plan ahead. Way ahead. At least 30-45 days in advance. 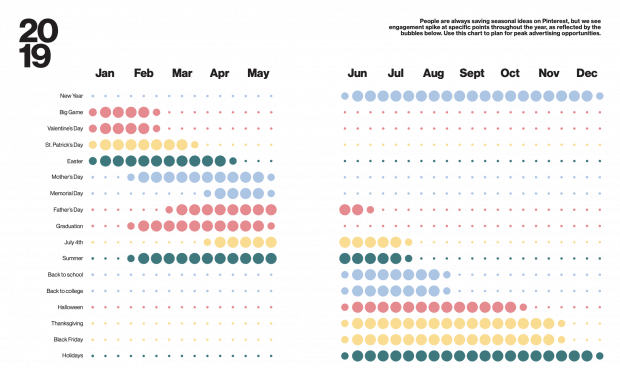 24. Pins that show a product or service in action are 67% more likely to drive sales

No need to be subtle. According to Pinterest best practice analysis, Pins that show someone using a product or service are much more likely to drive offline sales. Prominence is key, too. Pinterest research shows the clearer the product placement, the odds of an offline sales lift increase by 20%.

Home content continues to be one of the most popular categories on Pinterest. Home decorating, renovating, landscaping, and purchasing pins will always be popular. But there are some micro-trends that emerged this year.

Life events—like purchasing a home—also prompt Pinners to think about finances. Some 78% of users say they’re open to seeing FinServ pins when planning on Pinterest.

Notably, Pinners are 1.4 times more likely to trust what they find on Pinterest versus other social media sites.

28. With a +5,961% increase in climate change protest signs, Pinners are thinking about the environment

There’s no doubt that Greta Thunberg’s Fridays for the Future movement spurred this Pinterest trend. But other searches show that climate activism and conscious consumption will have staying power.

Save time managing your Pinterest presence using Hootsuite. From a single dashboard you can compose, schedule, and publish Pins, create new boards, Pin to multiple boards at once, and run all your other social media profiles. Try it free today.