Today, we speak a lot about the rise of the conscious consumer, but there’s also much to be said about the increasingly mindful social networker.

Similar to how consumers have grown more attentive to the social, ethical and health-related implications of their shopping habits, today’s social networker is more conscious of their digital wellbeing, online privacy and social footprint.

The nature and purpose of social media has changed for digital consumers and, consequently, for brands. It’s no longer just about visibility, but effectively targeting and engaging the right individuals.

As social media marketing has become a must for industry players wishing to remain competitive, success is awarded to those keeping track of wider changes in media habits.

Offering a detailed account of these issues, our latest social media report outlines several recent and crucial developments in online social behaviors; useful to anyone wishing to capture the attention and loyalty of today’s switched-on social networker.

Here are the highlights – summarized as three key shifts in the mindset of social media users.

Nearly all (97%) of today’s digital consumers are social media users, which means that the two terms are now virtually interchangeable. These high levels of adoption have been facilitated by the evolution of social platforms into entertainment hubs, spaces for product research, and brand engagement.

The number of those citing researching products as a main reason for using social media has risen from 23% in 2015, to 31% in 2019; with watching funny or entertaining content now ranking as the third-most popular motivation among internet users (37%). But these additional usages haven’t increased time spent on these platforms. In fact, social media consumption has plateaued in various markets.

We don’t need to look far for an explanation. In light of the New Year, cutting down on screen time has repeatedly been put forward as a meaningful resolution and a basis for self-improvement. By the same token, the concept of detoxing digitally has gained a lot of traction over the past year, served by functions such as Google’s Digital Wellbeing app and Apple’s Screen Time.

While watching, researching and shopping have become everyday aspects of social media, less time remains for behaviors that were once the essence of this phenomena – such as conversing and sharing. For example, the percentage of internet users saying they mainly use social media to stay in touch with their friends has fallen from 44% in 2015, to 38% in 2019.

This indicates that an expansion in the number of tasks we carry out on social media doesn’t equate to higher consumption levels; but rather increased moderation relative to our “social” activities. This detail alters the nature of the story somewhat.

While social media usage has stagnated or dropped slightly across various markets, time spent on social media has largely been repurposed rather than reduced.

For some, this reinforces the belief that the only way for social networkers to fully take charge of their usage is to silence their notifications altogether.

Regardless, it’s clear the online population has made significant efforts to ensure that time spent using these platforms doesn’t fall within the realm of excessive. This is a sign that, where social media is concerned, thoughts about digital wellbeing are never far behind.

The younger the internet user, the more likely they’re to engage with digital wellbeing tools: 27% of 16-24 year olds track their screen time or set limits on their phone each month (Index 1.16). Internet users in this age group are also the heaviest users of social media, typically devoting around 3 hours to using social platforms each day.

But across all age groups, high/heavy users of social media are more likely to use digital wellbeing tools, which shows that concern for digital health increases alongside consumption. In other words, the larger and more varied the role played by social media in our daily lives, the greater the need to reduce time spent carrying out less purposeful activities.

We can expect this trend to continue throughout 2020, as being “switched-on” increasingly demands switching off.

Our annual trends report, Connecting the Dots, sheds light on the topic of privacy concerns in relation to social media. It’s unsurprising that, of a list of 11 organization types, internet users in the U.S. and UK were least inclined to say that social media companies offer the best protection for peoples’ personal data.

Social media companies have come under fire in recent years for failing to safeguard the identity of users.

While these concerns are nothing new, users are growing more wary as society becomes increasingly data-driven, and as the media reiterates the worth of their personal information.

Of the giants in the social world, Facebook has been observed the most, largely due to its immense scope and influence. Maintaining its dominion over the social space, it remains the leading social platform by membership: outside of China, 83% of internet users have a Facebook account.

Even this statistic doesn’t do justice to the size of this social powerhouse – as it fails to account for Facebook’s ownership of four of the top five social platforms by membership: including Facebook Messenger (72%), WhatsApp (68%) and Instagram (65%).

Despite concerns being linked to the platform itself, our data shows that a much better predictor of privacy related anxieties is usage. The heaviest users of social media are typically the most apprehensive – showing that fears are by no means specific to Facebook, but appear across the social media spectrum.

Privacy concerns also vary in intensity depending on the nature of the information. Of a list of 14 different data types, internet users in the U.S. and UK agreed that their personal and financial details were the most exposing. This scale ultimately reveals that the data itself is just as important as the platform on which it’s shared.

One thing we can be sure of is that these growing concerns have had consequences. They’ve urged users to reconsider what they share and who they share it with.

Social media users have become increasingly more conscious of the trail they leave behind each time they’re active on these platforms – activities that can easily and permanently be traced back to them.

Since the dawn of social media, countless examples have demonstrated the likely consequences of posting offensive or socially insensitive content. These echoes and their lasting implications have lingered in the cultural consciousness, and remind users that the information they broadcast is effectively written in ink.

Hence the rise of dark social: the sharing of content through private social channels like messaging apps or email.

Both Facebook Messenger and WhatsApp have extended their influence in recent years. For example, while 48% were visiting WhatsApp each month (outside China) in 2016, this figure has now climbed to 61%.

More importantly, this mode of thinking has encouraged users to reassess how often they share information with their wider social circle.

Our data reveals a pattern of social media users gradually growing less likely to share their own photos or publicize their opinion on these platforms. The difference over time is greater among high and heavy users, who spend longer on social networks and are therefore more subject to sharing in the first place.

Compared to 2015, high and heavy social media users are 20% less likely to use these platforms to share their opinion.

This decline in sharing habits helps account for why the act of creating and viewing stories has made huge gains in recent years. Stories provide social networkers with an attractive alternative to creating lasting or widely accessible content, as they’re short-lived and sharing settings can be customized.

As testament to their rising popularity, Facebook and Messenger stories boasted a combined average of 500 million daily users in the latter half of 2019. This can be seen in the wider context of enabling users to contain their most intimate information within tighter social circles, recently prompting the social media giant to reproduce Instagram’s Close Friends feature.

These wider shifts in sharing habits suggest that compact networks will play an important role in the future online social environment – whether this involves making use of relevant features on larger platforms or migrating to smaller ones.

What this all means

As social media becomes an ever more powerful and essential aspect of our everyday lives, the need to understand it grows too.

The evolving behaviors of social media users reflect their continued efforts to inform themselves about the possible effects and repercussions of partaking in the social sphere.

Our latest social media report details and expands upon all of the above-mentioned themes; telling the story of wider attempts to understand and respond to the dynamic and highly influential phenomena that is social media.

Revealing social media literacy to be at its highest point to date, it shows that today’s switched-on social networker wants to be spoken to in the most open and transparent way possible. That is, in a manner worthy of their understanding. 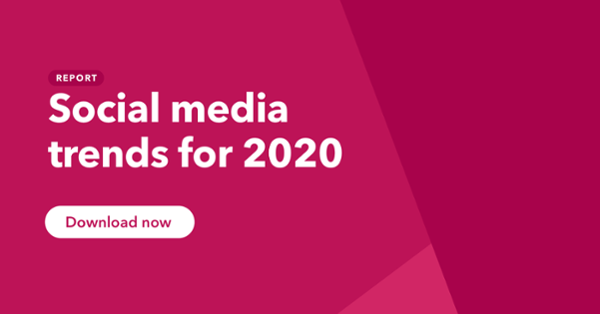