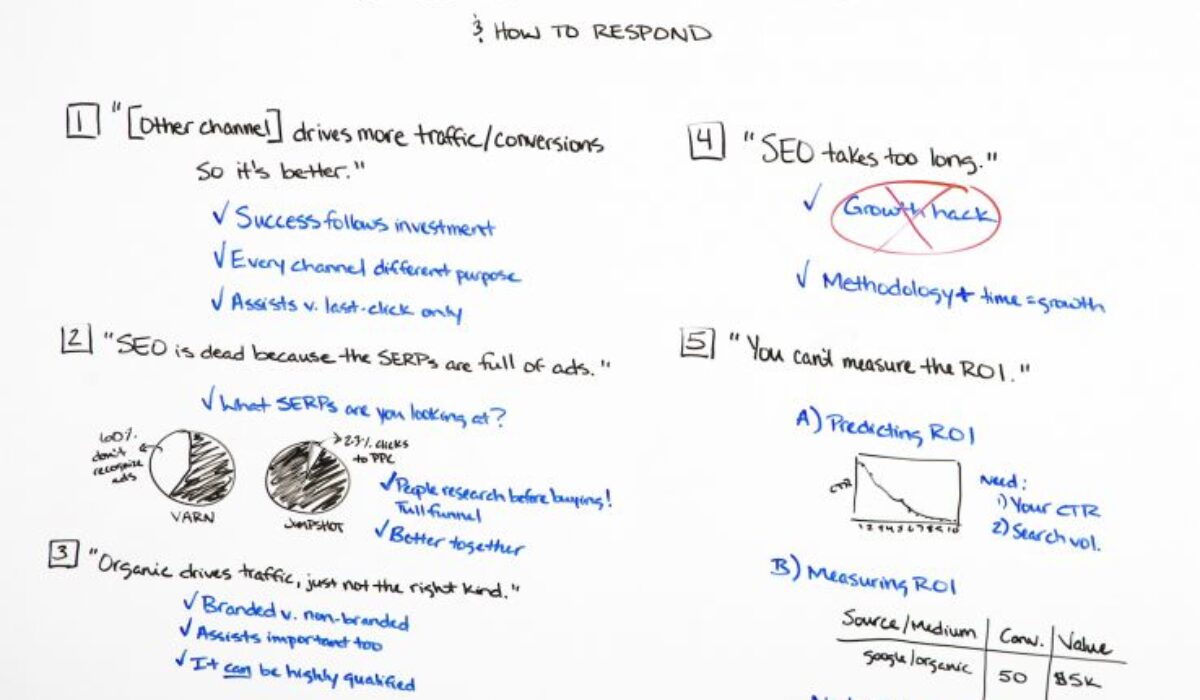 With marketing budgets taking a hit under the economic strain of COVID-19, advocating for the value SEO can bring to a struggling business is a new take on an old battle. This popular Whiteboard Friday episode by Kameron Jenkins covers five common objections you’ll hear to SEO and how to counter them with smart, researched, fact-based responses — an important skill to brush up on now more than ever.

Hey, everybody. Welcome to this week’s edition of Whiteboard Friday. My name is Kameron Jenkins, and today we’re going to be going through five common objections to SEO and how to respond. Now I know, if you’re watching this and you’re an SEO, you have faced some of these very objections before and probably a lot of others.

This is not an exhaustive list. I’m sure you’ve faced a ton of other objections, whether you’re talking to a potential client, maybe you’re talking to your friend or your family member. A lot of people have misunderstandings about SEO and that causes them to object to wanting to invest in it. So I thought I’d go through some of the ones that I hear the most and how I tend to respond in those situations. Hopefully, you’ll find that helpful.

Let’s dive in. The number one objection I hear a lot of the time is this other channel, whether that be PPC, social, whatever, drives more traffic or conversions, therefore it’s better than SEO. I want to respond a few different ways depending.

So the number one thing I would usually say is that don’t forget that success follows investment.

So if you are investing a lot of time and money and talent into your PPC or social and you’re not really doing much with organic, you’re kind of just letting it go, usually that means, yeah, that other channel is going to be a lot more successful. So just keep that in mind. It’s not inherently successful or not. It kind of reflects the effort you’re putting into it.

Every channel serves a different purpose

So just keep that in mind. Every channel serves a different purpose.

The last thing I would say, kind of dovetailing off of that, is that assists versus last click only I know is a debate when it comes to attribution. But just keep in mind that when SEO and organic search doesn’t convert as the last click before conversion, it still usually assists in the process. So look at your assisted conversions and see how SEO is contributing.

2. “SEO is dead because the SERPs are full of ads.”

The number two objection I usually hear is SEO is dead because the SERPs are full of ads. To that, I would respond with a question.

What SERPs are you looking at?

It really depends on what you’re querying. If you’re only looking at those bottom funnel, high cost per click, your money keywords, absolutely those are monetized.

Those are going to be heavily monetized, because those are at the bottom of the funnel. So if you’re only ever looking at that, you might be pessimistic when it comes to your SEO. You might not be thinking that SEO has any kind of value, because organic search, those organic results are pushed down really low when you’re looking at those bottom funnel terms. So I think these two pieces of research are really interesting to look at in tandem when it comes to a response to this question.

I think this was put out sometime last year by Varn Research, and it said that 60% of people, when they see ads on the search results, they don’t even recognize that they’re ads. That’s actually probably higher now that Google changed it from green to black and it kind of blends in a little bit better with the rest of it. But then this data from Jumpshot says that only about 2% to 3% of all search clicks go to PPC.

So how can these things coexist? Well, they can coexist because the vast majority of searches don’t trigger ads. A lot more searches are informational and navigational more so than commercial.

So just keep in mind that people are doing a lot of research before buying.

A lot of times they’re looking to learn more information. They’re looking to compare. Keep in mind your buyer’s entire journey, their entire funnel and focus on that. Don’t just focus on the bottom of the funnel, because you will get discouraged when it comes to SEO if you’re only looking there.

Also, they’re just better together. There are a lot of studies that show that PPC and SEO are more effective when they’re both shown on the search results together for a single company.

I’m thinking of one by Seer, they did right now, that showed the CTR is higher for both when they’re on the page together. So just keep that in mind.

The number three objection I hear a lot is that organic drives traffic, just not the right kind of traffic. People usually mean a few different things when they say that.

Number one, they could mean that organic drives traffic, but it’s usually just branded traffic anyway.

It’s just people who know about us already, and they’re searching our business name and they’re finding us. That could be true. But again, that’s probably because you’re not investing in SEO, not because SEO is not valuable. I would also say that a lot of times this is pretty easily debunked. A lot of times inadvertently people are ranking for non-branded terms that they didn’t even know they were ranking for.

So go into Google Search Console, look at their non-branded queries and see what’s driving impressions and clicks to the website.

Assists are important too

Number two, again, just to say this one more time, assists are important too. They play a part in the eventual conversion or purchase. So even if organic drives traffic that doesn’t convert as the last click before conversion, it still usually plays a role.

It can be highly qualified

Moving on to number four, that objection I hear is SEO takes too long. That’s honestly one of the most common objections you hear about SEO.

SEO is not a growth hack

In response to that, I would say it’s not a growth hack. A lot of people who are really antsy about SEO and like “why isn’t it working right now” are really looking for those instant results.

They want a tactic they can sprinkle on their website for instant whatever they want. Usually it’s conversions and revenue and growth. I would say it’s not a growth hack. If you’re looking at it that way, it’s going to disappoint you.

READ ALSO  Some cheers, a few sneers for Google’s URL solution for AMP

So that’s how I respond to that one.

Number five, the last one and probably one of the most frustrating, I’m sure this is not exclusive to SEO. I know social hears it a lot. You can’t measure the ROI, therefore I don’t want to invest in it, because I don’t have proof that I’m getting a return on this investment. So people kind of tend to mean, I think, two things when they say this.

Number one, they really want to be able to predict ROI before they even dive in. They want assurances that if I invest in this, I’m going to get X in return, which there are a lot of, I think, problems with that inherently, but there are some ways you can get close to gauging what you’re going to get for your efforts. So what I would do in this situation is use your own website’s data to build yourself a click-through rate curve so that you know the click-through rate at your various rank positions.

By knowing that and combining that with the search volume of a keyword or a phrase that you want to go after, you can multiply the two and just say, “Hey, here’s the expected traffic we will get if you will let me work on improving our rank position from 9 to 2 or 1” or whatever that is. So there are ways to estimate and get close.

A lot of times, when you do improve, you’re focusing on improving one term, you’re likely going to get a lot more traffic than what you’re estimating because you tend to end up ranking for so many more longer tail keywords that bring in a lot of additional search volume. So you’re probably going to even underestimate when you do this. But that’s one way you can predict ROI.

Number two here, measuring ROI is a lot of times what people want to be doing.

They want to be able to prove that what they’re doing is beneficial in terms of revenue. So one way to do this is to get the lifetime value of the customer, multiply that by the close rate so that you can have a goal value. Now if you turn on your conversions and set up your goals in Google Analytics, which you I think should be doing, this assumes that you’re not an e-commerce site.

There’s different tracking for that, but a similar type of methodology applies. If you apply these things, you can have a goal value. So that way, when people convert on your site, you start to rack up the actual dollar value, the estimated dollar value that whatever channel is producing. So you can go to your source/medium report and see Google organic and see how many conversions it’s producing and how much value.

This same thing applies if you go to your assisted conversions report. You can see how much value is in there as well. I think that’s really beneficial just to be able to show people like, “Look, it is generating revenue.My SEO that’s getting you organic search traffic is generating value and real dollars and cents for you.” So those are some of the most common objections that I hear.

I want to know what are some of the ones that you hear too. So pop those in the comments. Let me know the objections you hear a lot of the time and include how you’re either struggling to respond or find the right response to people or something that you found works as a response. Share that with us. We’d all love to know. Let’s make SEO better and something that people understand a lot better. So that’s it for this week’s Whiteboard Friday.

Come back again next week for another one.