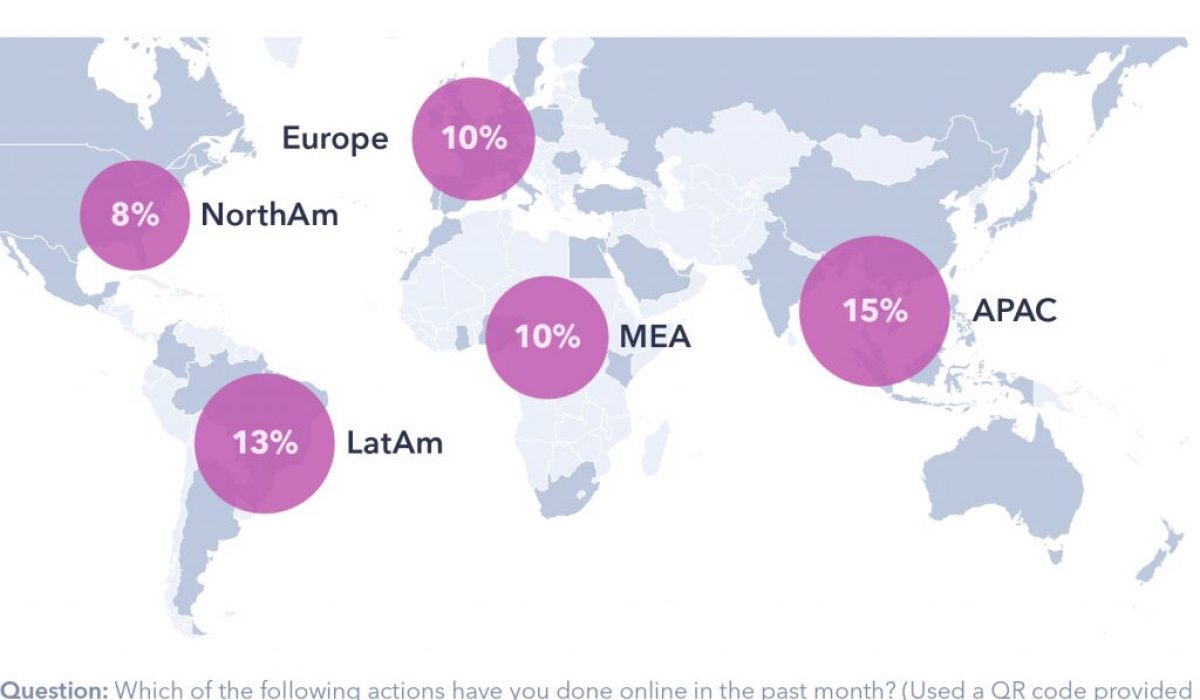 QR (quick response) codes are the business cards of today. And now, they’re being used on a scale and in ways unforeseen by their original inventor.

Denso Wave put forward his creation in 1994, by modifying the barcode in a bid to simplify the process of tracking cars and their components.

And when marketers first latched onto the idea of using these codes as part of their campaign strategy, they soon discovered they were way ahead of their time.

But slower internet connection speeds, lower smartphone penetration rates and the need to download separate apps to use the technology meant they were soon regarded as more trouble than they were worth.

Despite some countries demonstrating enthusiasm about integrating these codes into their lifestyles, other areas have been much slower on the uptake.

Yet, it’s likely that we’ll see more of these codes in future, as brands realize the arguments in their favor reflect the consumer preferences of millennials and Gen Z – the ones paving the way forward for future generations.

A spotlight on QR code users

A large portion of those using brands’ QR codes are in Asia Pacific. Mobiles are the most popular device here, with 15% of the internet population engaging with branded QR codes on a monthly basis.

QR codes are comparatively less popular in North America, where a PC, laptop or tablet is the most utilized device for over half of internet users, and just 8% use brands’ QR codes monthly.

Of those who’ve used a brand’s QR code in the last month, 45% are millennials.

QR code users are therefore younger and wealthier when compared to other internet users. Of this group, 3 in 4 are also located in urban areas and almost 60% are male.

So why is it the right time to be using QR codes?

Almost 2 in 3 millennials would pay more for sustainable or eco-friendly products.

Millennials are willing to spend more to protect the planet. And despite having less disposable income, Gen Z aren’t far behind.

For this reason, QR codes can be easily adapted to attract a younger audience, and brands appealing to this audience’s desire for sustainability are seeing great results.

British Airways has removed the need for boarding passes altogether by offering flyers the option of using QR codes as an alternative. The company also recently launched their electronic bag tags initiative, erasing the need to print them.

Similarly, QuickReceipts is a company that offers digital or “green” receipts to brands; their QR codes can be picked up by most screens to generate paperless receipts.

The emergence of businesses such as these is a sign of the times -a symptom of a wider movement toward going paperless; and an effort to meet the expectations of increasingly environmentally-minded consumers.

Hoping to cash-in on the desire for speedy and effective access to venues, Eventbrite issued an article earlier this year encouraging organizers to replace tickets with QR codes at their events. The main motivations for doing this, they argue, are to reduce long queues and keep guests happy.

Likewise, in response to the long working hours of those living in South Korea, Tesco introduced virtual stores allowing commuters to scan QR codes (representing products) on their phone. This gives consumers the ability to be able to shop on their way home, while waiting at stations and bus stops.

For 8 in 10 Gen Zs and 3 in 4 millennials, mobile is their most important device. Being a mobile-first communication strategy, QR codes are well-suited to this audience.

We’ve already seen the growth of mobile payments across the globe, and NFC in the West. Anything that simplifies the payment process and minimizes waiting times is likely to gain traction among these consumers.

In light of various food scandals, consumers are more wary about where their food has come from. Thankfully, QR codes can help customers access this kind of information.

2 in 10 of those who have scanned or used a QR code in the last month most want brands to keep them up-to-date with the latest news and products.

Knowledge about brands and their values is therefore important to these consumers.

In Brazil last year, one of the country’s largest dairy providers (Languiru) added QR codes to its cartons. This allowed customers to trace the journey cartons took from industrialization to the shelf.

Almost half of those characterized as health-conscious consumers are millennials. Younger demographics are the moving force behind the plant-based, meat and dairy free movement.

Over a third of millennials and Gen Zs buy health foods on a monthly basis.

In response to a growing number of health conscious, younger consumers, QR codes are being used by fast food outlets and restaurants to provide nutritional information.

McDonalds introduced QR codes to its packaging back in 2013, putting facts about the food customers were eating at their fingertips. And realizing the effectiveness of this method, Chili’s continues to add QR codes to its menus, linking them to healthy items and lighter options.

This allows the brand to advertise new products and gives this generation of health-conscious consumers instant access to the nutritional information they desire.

QR codes can also be the key to unlocking branded content and engaging with consumers in new and clever ways.

From recipe suggestions to discount codes, there are many ways this technology can be integrated into a brand’s marketing campaign.

Younger demographics are particularly enthusiastic when it comes to engaging with (and wanting a personal relationship with) brands on social media.

More than 4 in every 10 millennials and Gen Zs follow brands they like on social media, with almost 4 in 10 Gen Zs saying they would advocate a company’s products simply out of love for the brand.

Hoping to develop a closer relationship with its consumers, Malibu added QR codes to its packaging for a limited period of time this summer. As part of a promotion, customers could scan their code to get access to recipes and gain entry into exclusive competitions.

Similarly, McDonald’s included QR codes in the design of their happy meals as a way of promoting the latest Avengers film released earlier in the year. These gave McDonald’s customers access to exclusive and behind-the-scenes movie footage.

QR codes are versatile. Among other things, they can also link customers to product demonstrations and consumer reviews.

With younger generations expecting more from the shopping experience than ever before, QR codes are one way of making the buying process smoother and more interactive.

Those using brands’ QR codes have a strong desire for immersive content.

This group is twice as likely as the average consumer to have downloaded or used a branded app in the last month (37% have done so); and to have asked a brand-related question on a social network (30% do this). Around 1 in 4 also interact with brands by providing ideas for new products or designs on a monthly basis (Index 2.30).

This indicates that, once comfortable interacting with brands through QR codes, consumers are more likely to become loyal followers who demonstrate engagement across various social channels.

Augmented Reality apps are particularly popular among this group, with 11% using them (Index 2.40). This suggests that those most likely to adopt QR codes prefer exciting material that captures their attention and encourages involvement.

QR codes became popular in China when, in 2011, WeChat and Alipay began offering them as a digital payment option.

Compared to just 19% of those in the U.S., 37% of internet users in China use a mobile payment service on a monthly basis. The popularity of mobile payment methods here can be explained in part by the rise of QR codes, and the simplicity and ease with which people can use them.

QR codes have left their mark on India too, and are now commonly used by smartphone owners to pay for meals and goods in restaurants and shops.

The current leader in the Indian digital payments market, Paytm, first set QR codes in motion by introducing them as a payment method. Hoping to emulate their success, WhatsApp aims to launch its own mobile payment service later this year.

Outside of these countries, uptake of QR payments has been somewhat slow. Yet, it is on the rise. Singapore established one of the world’s first unified payment QR codes (SGQR) in 2018, compatible with 27 e-payment schemes; and Saudi Arabia announced its decision to put a nationwide QR-based payment system into practice over the coming year.

What’s more, Alipay recently disclosed its collaboration with six well-known mobile wallets in Europe, with the aim of building a unified QR code in areas where the mobile payment landscape is less established.

For example, Facebook Messenger codes were abandoned earlier this year, giving way to traditional QR codes, which are automatically detected by most phones.

QR codes are likely to rise in popularity as they integrate with other payment methods. Like Facebook Messenger codes, alternatives risk being cast aside as QR codes become the standard.

We’re also now able to answer a question thrown around in 2011: SnapTags won’t bring about the death of QR codes; which, unlike Snapchat’s alternative, are widely accessible.

The potential for QR codes is huge. But at this point we’re only able to speculate. Despite being ubiquitous in China, they’re not nearly as welcome as NFC in various parts of the West.

Some of the frustration of the past surrounding QR codes still lingers today, and many areas continue to see NFC as a more effective method of payment and engagement.

Younger consumers tend to be the earliest adopters when it comes to emerging technology. So it seems appropriate that brands should therefore aim to target these consumers.

But with younger demographics becoming increasingly aware of how much time they spend online (over ¼ of millennials and Gen Zs track their screen time or set limits for apps) and frightened of life becoming overly digitized, brands must make QR codes worth their while.

Campaign strategies utilizing QR codes have proven successful for many brands in the past and this is likely to continue as companies discover how to use this technology in more inventive and engaging ways. Only then will the true value QR codes can add to the purchase journey be understood.

Lastly, as online commerce continues to grow and evolve, so too will its relationship with physical stores.

QR codes provide an important bridge between online and offline experiences, and as such they could create new opportunities in the omni-channel shopping journey, helping brands to close the online-offline loop in their stores or out-of-home ad campaigns.

Though success is never guaranteed, there’s never been a better time to experiment with this technology.