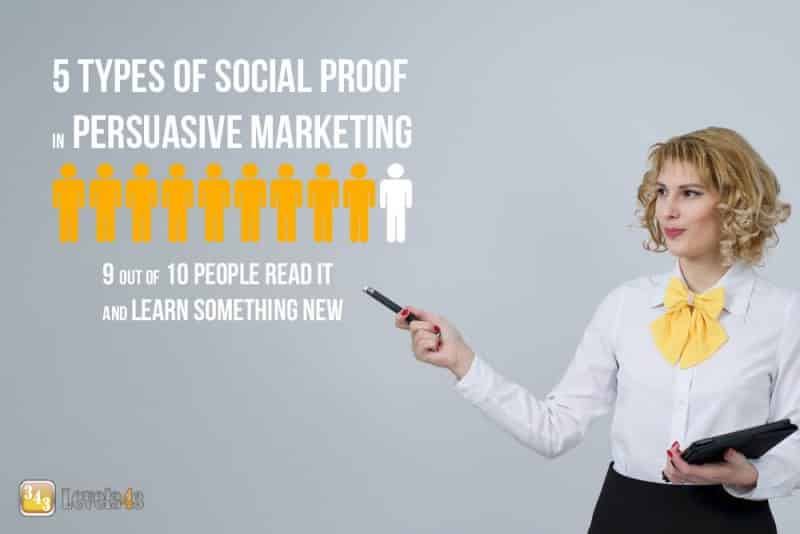 There are several social proof types that tap into the social nature of your visitors, increasing conversion and trust in your brand. Though this influence has been around for a long time, the social explosion of the internet has revealed a whole new side beyond simple testimonies and written reviews. Social media outlets alone have created many new options to choose from, some you may not have even considered. Before you resign yourself to a single method, let’s outline the different general types and related methods of social proof available.

Customers, members, subscribers, and anyone else that has had an experience with your product, brand or service are all users of your brand. User social proof is one of the most commonly referenced types of social influence in marketing. Yelp, for instance, relies on user reviews of other companies. Testimonials, such as those on infomercials, and case studies conducted to analyze your customer base are other methods of social proof involving users.

Outside the box, social media comments made by your customers can also be considered user influences. These may be seen as reviews or testimonials, but they often lack the intentional evaluation typical of other methods. Customer comments can be one of the most genuine forms of proof, making it extremely powerful.

Anything that suggests a large amount of people are doing the same thing is a crowd count. Counting customers, products sold and other general statistics show visitors the scale of the crowd. Some newer methods of counting the crowd include the number of social followers, article shares, and subscribers to your newsletter.

Ratings are a simple scale stating how your brand compares to others. Amazon allows users to rate both products and sellers, providing a simple social evaluation for their customers. However, ratings can also be a third party analysis, like with Google’s “Trusted Store” certification and score.

Other methods of rating involve highlighting the top performers, such as best selling items or popular articles. Social media sites encourage interaction by featuring trending topics, for example. Comparing products with similar ratings is an example of adapting this method for greater influence.

Reviews or testimonials from known figures (e.g. influencer marketing) are time-tested methods of social proof. The practice of sending a product to leading authorities and other popular figures in your industry is a proven tactic. Paid endorsements from celebrities, such as cereal companies often do, are a common use of known figures. As a side note, unpaid endorsements or reviews tend to be more effective if available.

Trust seals and certifications from known brands also add social influence. A BBB stamp of approval, for example, informs your audience that you are in good standing as a trustworthy business. The better known the certification, the more influence it will have.

Don’t underestimate the power of customer referrals as a social influence, either. Dropbox, for example, employed the use of referring family, friends and even coworkers to initially grow their user base with great success. A suggestion from the right person can be just as powerful as proof from thousands of strangers. Referrals, otherwise known as word-of-mouth marketing, often create some of the most long-lasting customers.

Before choosing what method to work on first, remember that no proof is preferable to proof that’s lacking. Too few reviews or ratings, for example, implies your product isn’t worth buying. Even if the reviews are glowing with praise, the numbers will work against your brand (negative social proof). You may find it best to begin with statistics and endorsements from known figures to get the ball rolling.

Whatever you choose, plan it out first. The worst thing you can do in any marketing endeavor is jump in with both feet without looking to see how deep the waters are. Consider which social proof types will work the best for what you’re trying to achieve. Work out the pros and cons, plan, execute. To your continued success!

If you need help with your next step, contact Level343. We specialize in taking businesses higher on the ladder of success.