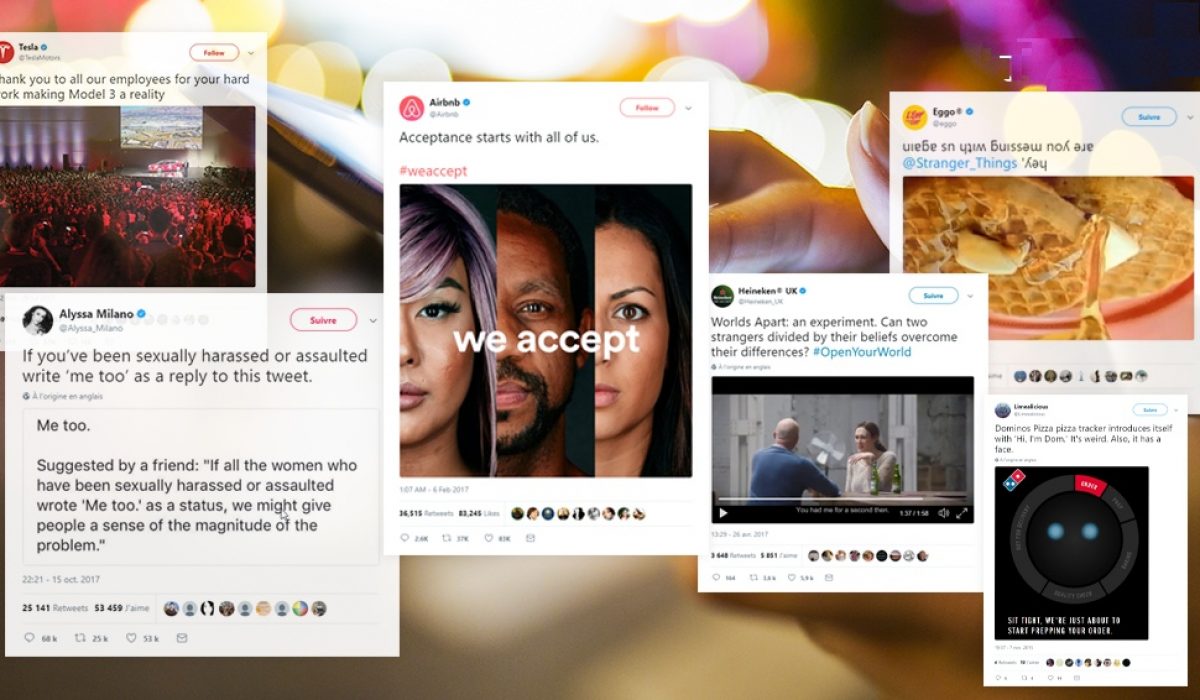 Putting together a successful social media campaign isn’t easy, but sometimes a spark of creativity is all you need.

All year long, we’ve kept tabs on the biggest, cleverest and most inspiring social media campaigns out there and collected them in one awesome blog. Here are six of the best we’ve seen.

2017 was the year that purpose-driven marketing really hit the big time.

Spurred on especially by events in the US, global brands like Heineken and others moved beyond products and aspirations to touch on people’s values.

Their #OpenYourWorld campaign focused on bringing people together with polar opposite views and eventually discussing their differences over – you guessed it – a bottle of Heineken.

Although the business impact of purpose-driven marketing is still the subject of some debate, the sheer scale of media coverage generated by the campaign was pretty remarkable, with this YouTube video alone generating over 14 million views. And it wasn’t just about a great YouTube video – on Facebook, Heineken experimented with a chatbot which connects people from different backgrounds.

It may be a while before the impact on sales is known, but for in terms of reputation, this multi-channel campaign receives an A+ from us.

For more on how Heineken makes a visual impact on social, take a look at our image analytics report for consumer brands.

Tesla and the Model 3 – The Power of the Social CEO

Wrong. It’s actually Renault-Nissan but the fact most people would assume it’s Tesla shows how impactful their marketing efforts have been this year.

Elon Musk, the world’s foremost tech superhero (super villain?) has been at his bombastic best once again this year and on social media, the launch of the new Model 3 turned heads across the world.

Despite being far smaller than their automotive rivals, our research into the social media activity of automotive brands found that Tesla regularly outperformed larger competitors, generating over 3X the engagement of the next best performing automotive brand on Twitter.

The thing that really stands out for Tesla is the impact that Elon Musk has on their marketing. During the live streaming/tweeting of the Model 3 launch, Musk was front and center, sharing posts on social media to his 15 million+ followers and making a huge difference to the engagement and reach of each of these posts.

READ ALSO  Why Your Retargeting Strategy Is Losing You Customers

The lesson? A truly social CEO can make a big impact in the personality-driven world of social media.

Dom from Domino’s – The Chatbots are Coming

Chatbots were one of the big innovations to become mainstream in social media marketing in 2017, but there was one company in particular that took full advantage of both their utility and their compatibility with social – Domino’s Pizza.

I mean who isn’t interested in a robot that will order you a pizza?

This is a bit of a cheeky one as Dom was first created in the summer of 2016, but given the prerequisites needed for ordering (account login, pre-order settings) it wasn’t really until 2017 that “Dom” became the master of pizza that he is today.

We analyzed some of the top marketing and social media trends discussed in 2017 and with chatbots right at the top alongside AI and machine learning, it will be fascinating to see how things progress next year.

At the end of 2016, Airbnb was struggling to cope with a serious problem – there were widespread allegations of Airbnb hosts turning away guests for discriminatory reasons. Airbnb responded, and set new guidelines to ensure everyone in the Airbnb community is treated equally. But they needed to spread the message.

So in February 2017, during the Super Bowl, they put forward the #WeAccept campaign:

What makes this campaign stand out (aside from remarkable performance on social) is that Airbnb was able to turn around what could have been a source of negativity, and not just fight the fire, but actually begin to own the conversation. It was a first class lesson in social media marketing for reputation management and an example of marketing, PR and product, all working hand in hand.

And those social results? Well according to Airbnb, the #WeAccept campaign was Airbnb’s 3rd largest driver of earned impressions of all-time at over 87 million. On Twitter, #WeAccept was the #1 advertiser hashtag used during the Super Bowl, as Airbnb generated over 33k tweets during the first half of the game, more than any other advertiser, with overwhelmingly positive sentiment. Reactions to the overall campaign were 85% positive (based on an Airbnb internal tracker).

It’s not all about brands. The non-commercial social campaign that caught our eye, was #MeToo.The campaign gave a voice to millions of women (and a few men) from around the world who had suffered sexual assault and harassment, igniting a global social media discussion.

Whether intentional or not, social media was the perfect medium for this campaign to go truly global, and perhaps most importantly, for people to see that not only were they not alone, but that the issue was widespread. The hashtag was used over a million times in just two days and spread to almost every corner of the globe. It’s also notable that although organic reach may be dying, when the message is truly powerful, it can still work.

It all started with a single tweet from actress and activist Alyssa Milano and has since given rise to global media coverage, new initiatives and greater awareness of this international problem.

Our final campaign comes from the curious world of Eggo and Stranger Things. The 80’s style Netflix sensation has taken the world by storm and the brand most linked to the series? Eggo, Kelloggs’ waffle brand.

What makes this campaign smart is how they have managed to turn an oft-derided marketing tactic (product placement) into something that now feels like an intrinsic part of the series. Instead of “subtly” placing the brand in the episodes, both brand and writers work together to create something that is amusing and authentic, using social media to build this connection publicly.

These are some of the best social campaigns we’ve seen this year – hopefully they can help get you thinking about your strategy for 2018, and what’s generating the most impact and response.