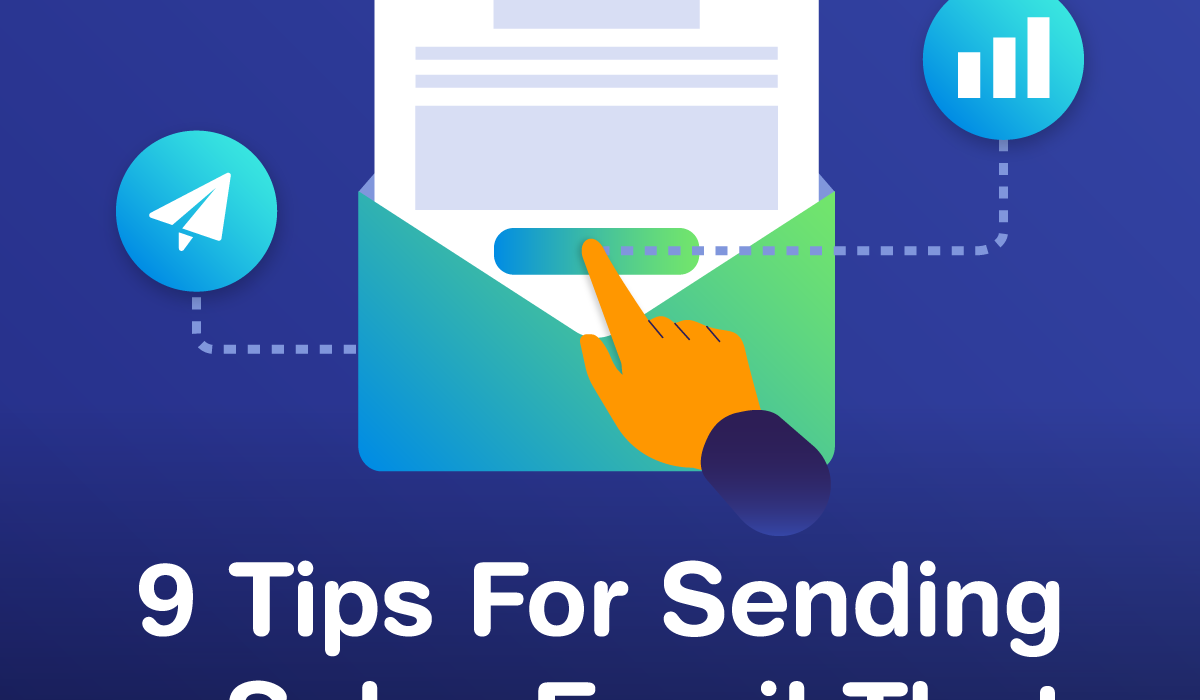 Statistics show that a total of 300 billion emails are going to be sent throughout the year this year. It’s hard to even comprehend the scale at which emails are going around nowadays. However, despite the sheer dominance of emails in the current era, some still struggle.

In particular, many people struggle with the seemingly Herculean task of sending out sales emails that actually convert. In a decade where spam is both persistent and ubiquitous, it takes a solid strategy to get people to open your emails, much less read your call-to-action.

This article is going to teach you everything you need to know to boost the conversion rate on your sales emails, even in the challenging landscape that marketers are currently facing. Without further adieu, let’s get into these tried-and-tested tips.

The last thing you want to do is send a wall of text to your prospects. No one has time to read long paragraphs in this day and age. Many people are constantly on the move, rushing to get to their next important business meeting.

If you want people to actually read your emails all the way through to the CTA, then you have to learn to be concise while still getting the message across. We’re not saying that you have to make every email super short, but don’t add in any non-essential text.

Every sentence in your email should serve a distinct purpose since you don’t know how far the prospect will read before closing the tab. This also ensures that your email doesn’t drag along. After all, a slow pace can be significantly detrimental to your conversion rates.

In addition to staying concise, you should also keep your emails simple. Some marketers think that shoehorning jargon into their sequences will help them acquire new clients since it shows prospects that they know their stuff.

In reality, your conversion rate will be hindered by the overly complicated language that you’re using since the recipient won’t have a clue as to what you’re talking about. Sure, they might think you know your stuff, but they won’t know your stuff — so what’s the point?

You should be trying to inform your prospects of all the reasons why they should reply to you or act on your CTA, but how are you supposed to do that if you can’t get the message across? Using simpler language will ensure that recipients get a firm grasp on your value proposition.

Remember what we said about not sending a wall of text? Well, that doesn’t only refer to length but also to formatting. Even a relatively short email can come off as too much of a burden to read if you don’t use the proper email format when writing it.

The human mind likes to see empty space in between content when it’s digesting a piece of information, that’s why most online editors have automatic paragraph spacing. Readability is such a key determiner of your conversion rate, so put some effort into formatting.

Try to split paragraphs every other sentence — or even every sentence — so that you don’t give your prospects a headache when they read it. People are far more likely to read an email all the way through if it’s well-formatted since they know it won’t end with a migraine.

You’re probably wondering why we have another section on formatting right after the first one. No, we’re not aiming for redundancy. Proper formatting and creative formatting are two different things. The former is about keeping things clean while the latter is about going the extra mile.

While you might split paragraphs to achieve a proper format, you’d want to put some more effort into creative email formatting. A prime example of this would be the addition of bullet points. They aren’t necessary for cleanliness, but they present information in an eye-grabbing way.

Another great example is the use of headings. Again, not at all necessary when writing your emails, but they add that extra pop when readers see it. Furthermore, it makes them feel like they’re reading something crafted by a professional rather than a spam bot.

When you send your emails is just as important as what they actually say. You could send a perfectly crafted email, and it still won’t do you much good if it reaches the prospect’s inbox at three o’clock in the morning.

If they catch it before bed, then they’ll likely skim it for a few seconds before ultimately deleting it since they’re too sleepy to dedicate more energy to random CTAs. In the rare event that they do read it all the way through, they won’t act on the CTA at such a late hour.

“I’ll do it tomorrow” will be the first words out of their mouth after they finish reading your email. Of course, they’ll surely forget before waking up. Late-night emails can also get buried in other emails that come in after them. Aim for weekday mornings, around an hour before noon.

Names are everything when it comes to email marketing. The first name that you should be concerned with is the name of your prospect. Inserting their name into the subject line and opening paragraph will make the email feel more tailored to them.

This reassures them that they haven’t just received another run-of-the-mill spam email. The second name that you should include is your own. This reminds prospects that they’re listening to a real person, not a bot that sends emails out in the thousands.

Lastly, you’ll want to finish things up with your company name. This makes it easy for the prospect to find your website — if you don’t have one yet, you should really get one — after reading your email, which presents yet another opportunity to hook them into one of your offers.

If you really want your prospects to read a random email all the way through, then you should find a way to make them care about the message that you’re trying to get across. The easiest way to do this is by solving a problem that they’re currently facing.

The solution-based format of marketing has become a running gag over the years due to those old infomercials that would always open with lines such as “are you tired of toilet stains” or “sick of paint that drips on your floor?” but it’s actually a very effective strategy when done right.

Don’t go for the cheesy approach that the infomercials of yesterday were known for. Instead, try to be more subtle while still clearly outlining the problem that you’re trying to solve so the recipient will read to the end, assuming they suffer from the same issue.

This is the sequence that many veteran email marketers go by since it gives you a pretty good chance of reeling in a new prospect. You start by hooking the reader so that they actually dedicate their attention to the message.

Once you have them interested, provide value so that they keep reading instead of closing the tab. After you’ve provided enough value to establish yourself as a knowledgeable authority with a solution, you can make your request.

This can be a CTA to sign up for a course, join a mailing list, or buy a product. Regardless of what it is, you should be making your requests after you’ve provided the value. Prospects are more likely to buy something if they feel indebted for the value they received, so go capitalize.

The last tip that we’ll give you today is the importance of focus. You have to send every email with one specific purpose in mind. It’s very tempting for many email marketers who are new to the field to cram as many CTAs as possible into each sequence, but that’s not ideal.

If you really want to convert your prospects into paying customers, then you should only be throwing one CTA their way. Otherwise, you’ll overwhelm them with a million requests, and they’ll end up ignoring every single one.

Our rule of thumb is that you should open with the offer that’s most likely to get you a new customer. This may be one of your smaller offers that can lead to an upsell down the road. You don’t need them to make a big purchase straight away, just get the prospect on board.

As you can see, sending out emails that convert doesn’t have to be rocket science — and you can still get astronomic results without overcomplicating things. If you follow some of the tips that we’ve laid out above, then you should be ready to give your conversion rate a nice boost.

What are you waiting for? It’s the new decade! Go out there, be confident, and crush it! Adam Hempenstall is the CEO and Founder of Better Proposals, simple proposal software for creating beautiful, high-impact proposals in minutes. Having helped his customers at Better Proposals win $120,000,000+ in one year only, he’s launched the first Proposal Writing University where he shares business proposal best practices.