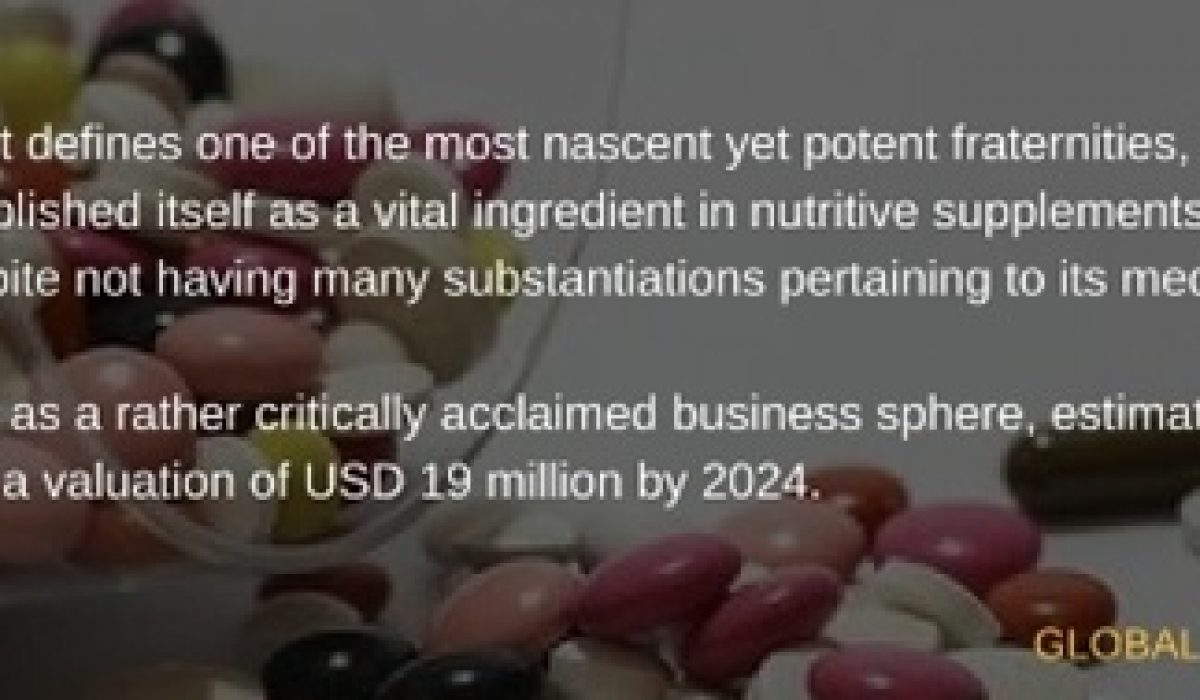 Alpha Lipoic Acid Industry has been one of the most debatable business fraternities with regard to its bio-diversified applications. The industry is strongly characterized by heavy R&D investments which emphasize on not only enhancing the application spectrum of the compound but also gathering substantiations to certify the results. Speaking of the commercialization of alpha lipoic acid market, this business procured a major share from its applications in the pharmaceutical space. In fact, as per the estimates, alpha lipoic acid industry share from the medical drugs applications is expected to register a CAGR of 6% over the period of 2017-2024. ALA has already generated a significant momentum in this space by registering itself as an important ingredient in drugs prescribed for the treatment of diseases such as cancer, diabetes, obesity. The new disease profile added in the application marathon of Alpha lipoic acid industry is Cystinuria, a disease that instigates recurring kidney stones. A recent research conducted by the Buck Institute for Research on Aging, Novato in collaboration with the University of California, San Francisco (UCSF) demonstrated the potential of alpha lipoic acid as a treatment for Cystinuria.

For the records, Alpha Lipoic acid was discovered in 1951 and has since then been recognized as one of the most potent naturally occurring antioxidants. The regulatory framework pertaining to alpha lipoic acid market, with regards to ALA usage as an ingredient in cosmetics, medicines, and edibles has been quite piquing over the years. The EU imposes no regulatory standards on the usage of ALA or thioctic acid; Japan allows a maximum of 0.01 g of ALA per 100 g of the cosmetic product for both the rinse off and leave on category, the usage of alpha lipoic acid in food has been granted in Japan since 2005; In Norway, ALA can be used at a concentration of approximately 5% in anti-aging products.

As per the estimates, alpha lipoic acid market registered a valuation of USD 11 million in 2016 and is estimated to surpass USD 19 million by 2024. The growth that this market has charted down over all these years can be owed to the contribution of the cosmetics, pharmaceuticals, and food sectors toward widening the application portfolio of ALA.

CodeCheck, Europe’s biggest product database which rates food & cosmetics on the basis of its impact on health and environment, enlists approximately 30-40 cosmetic products comprising ALA, most of which fall under the category of anti-aging cosmetics. The increasing alpha lipoic acid market share from the cosmetics application can be majorly credited to the anti-inflammatory and exfoliation properties of ALA.  However, ALA’s contribution toward protection from UV rays or its impact on reducing the sunburn cells still has no consensus. Reportedly, 5% of ALA in the cream has been attested to reflect a positive effect on the skin, particularly promoting the anti-aging benefits. However, the usage of cosmetics with ALA as an ingredient is not advisable for people with allergic or hypersensitive skin texture. As per the reports, ALA has been claimed to act as a potent sensitizer, with reference to which some studies claim the presence of 3% of ALA in cosmetic products to be a more viable and safer approach.

READ ALSO  How to Set Your 2019 Social Media Advertising Budget

Various studies quote that ALA has been one of the top 10 widely recommended dietary supplements, driven by its effectiveness in reducing high blood sugar levels. However, the concept lacked a cause and effect relationship between the usage of ALA and rise in insulin sensitivity.

An important trend to note here is the ongoing comparison between the credibility quotient of the two types of ALAs defining the product landscape of alpha lipoic acid industry – R and S. Most of the commercially available dietary supplements are a blend of both R and S enantiomers. As per a reliable report, R- enantiomers are preferred as a more suitable form of oral supplements due to a higher plasma concentration. However, S – alpha lipoic acid in the racemic form has also been attested to prevent polymerization of R- LA and thereby enhance the overall bioavailability.

According to an analysis by Global Market Insights, Inc. R – LA procured a major chunk of the overall alpha lipoic acid industry in 2016 and is estimated to witness a strong growth in the coming years, on grounds of its easy commercial availability.  S alpha lipoic acid market is projected to register a CAGR of 5% over the period of 2017-2024.

As per the statistics documented by WHO, the worldwide prevalence of obesity was analyzed to have been more than doubled between 1980-2014. Excluding the regions of Sub-Saharan Africa and Asia, the rest of the world witnesses a comparatively higher ratio of obese population than the underweight demography. In fact, in 2014, more than 1.9 billion adults (18 years and above) were overweight, out of which 600 million people were obese. The aforementioned statistics which demonstrates a clear picture of the huge demand to cure obesity itself bears a testimony to the escalating growth of alpha lipoic acid industry from slimming products. As per a report by Global Market Insights, alpha lipoic industry share from slimming products is anticipated to record an annual growth rate of 5% over the period of 2017-2024. North America is projected to establish a strong foothold in alpha lipoic acid market space, driven by the rising prevalence of obesity and the subsequent demand for slimming products in this region.

While there has been not much consensus on the use of ALA’s therapeutic value on a global scale, Germany has set a record to use ALA for 50 years as a therapy for diabetic neuropathy and diabetic retinopathy. Despite gaining a pronounced recognition in the medicinal drugs fraternity, below are some of the statistics demonstrating the controversial aspect of the therapeutic value of ALA:

However, with the ongoing research & development activities and the overall advancements in the healthcare fraternity, alpha lipoic acid market is set to witness an upward trajectory over the coming years. On regional terms, Asia Pacific alpha lipoic acid industry has already made a pronounced impact on the global industry landscape by accounting for the largest share in 2016 with a valuation of USD 3.5 million. This region is also becoming an investment destination for the alpha lipoic acid industry players, credit of which goes to the proliferating healthcare policies in this region. Some of the renowned names in alpha lipoic acid market are Shanghai Modern Pharmaceutical Co., Ltd., Health Genesis Corporation, NOW Health Group, Inc., Sabinsa Corporation, AlzChem AG, HiMedia Laboratories, Swanson Health Products, Shandong Qidu Pharmaceutical Co.,Ltd., Life Extension, and INFA Group.

Looking at the broad application forum of alpha lipoic acid industry which includes the incorporation of ALA as a common ingredient in multivitamin formulas, pet food, and anti-aging supplements, this fraternity is poised to enhance its profitability landscape over the coming years. It is undeniable that alpha lipoic acid market will continue intriguing not only the lay public but also the entire research community pertaining to ALA’s enormous scope as a nutritive supplement and as a pharmacotherapy.