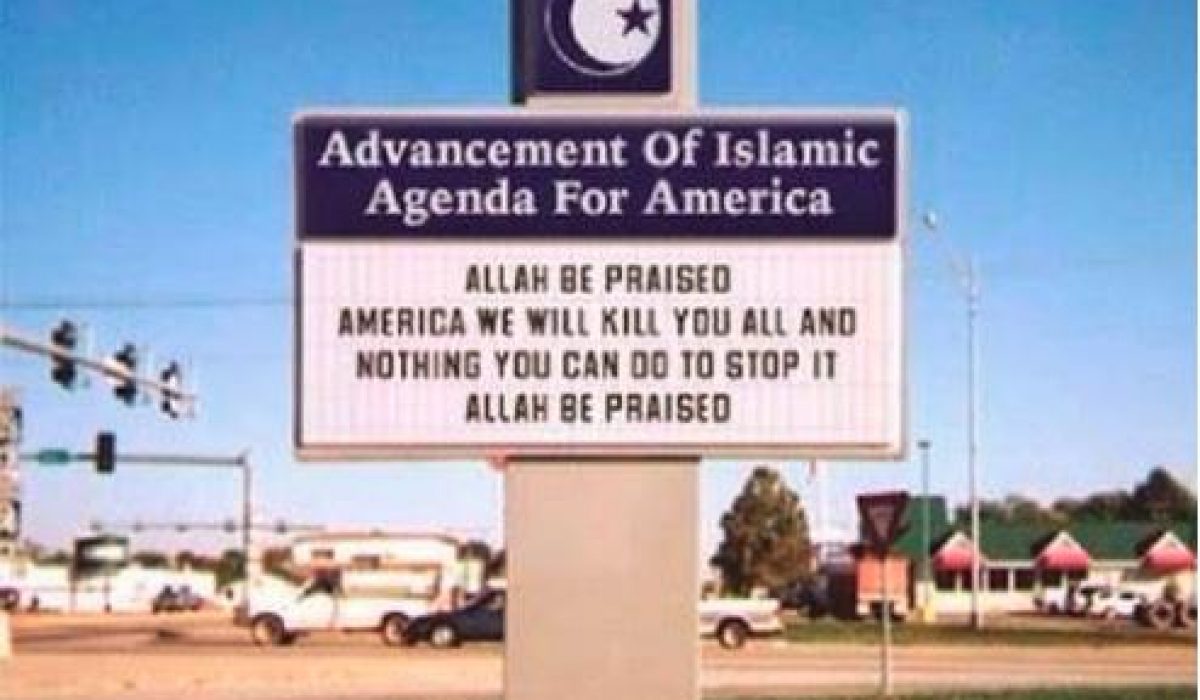 A sign reading “Advancement of Islamic Agenda for America” being posted outside a Michigan mosque is a digital fabrication. The photograph of a sign bearing an ominous threat from the group is a fake. There is no truth behind the image displaying a sign which bore a serious and ominous threat from the group “Advancement of Islamic Agenda for America.” Where did this originate?

Snopes reported that the photograph has been identified in social media postings as belonging to a mosque or some other Islam-associated administrative building in Michigan. The sign reads “Advancement of Islamic Agenda for America.”

The fake sign then advertises to viewers that organization’s ominous threat “AMERICA WE WILL KILL YOU ALL AND NOTHING YOU CAN DO TO STOP IT,” bracketed by invocations of the exaltation “ALLAH BE PRAISED.” However, the sign nor the organization is real.

Here are some examples of people sharing the digital fake image on social media.

Advancement of Islamic agenda for America ? WTF is that ? SMFH #WakeUpAmerica pic.twitter.com/JkWl4iDODT

Facebook posts: A sign in Dearborn, Mich., for the Advancement of Islamic Agenda for America says, &quot;Allah be … http://t.co/2V3qzRhl6k

Wow, So this is a sign posted in Dearborn, Michigan.
Advancement of Islamic Agenda For America #TheyreHere pic.twitter.com/EtgncB9CKS

Instead, the photograph was a fake created using the Church Sign Maker, which is a web site that allowed users to create realistic-looking images of church signs bearing messages of their choosing:

Ever seen those signs in front of churches with the moveable letters? Ever wanted to rearrange the letters to make your own church sign? Well, now you can. Choose a design below, add your text, and a personalized church sign photo will be created for you! Save it, send it to a friend, put on your website, or use it however you like. Enjoy!

Note: these church signs aren’t real, they don’t exist in the real world. You’ll be making a fake photo of a church sign.

In this case, Snopes reported that the “Advancement of Islamic Agenda for America” sign was clearly an altered version of the Church Sign Maker’s “Classic Design #5” offering. This is shown by the identical nature of the two signs’ sizes, shapes, and background objects in their photos which you can see below.

Webcast, August 1st: SEO: How to Outrank Your Competitors on Google (Our Step-by-Step Process)

What did you think of the digital fabrication? Did you believe it or see people sharing it falsely on social media? Let us know in the comments section.