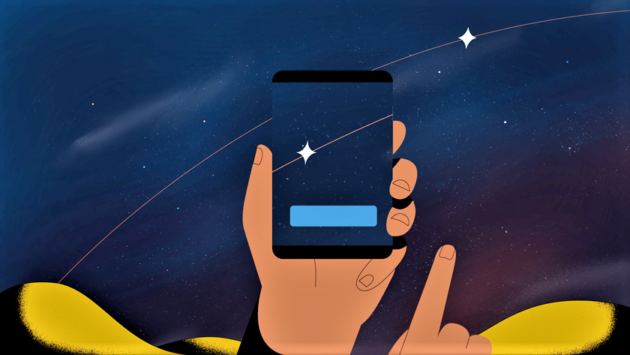 WASHINGTON, D.C. — A year after taking over the assets of a Redmond, Wash.-based asteroid mining company known as Planetary Resources, ConsenSys Space has unveiled its first project: an app-based system that makes use of amateur observers and Ethereum blockchain technology to keep track of satellites.

The open-source TruSat app was released tonight in conjunction with the International Astronautical Congress here in Washington, and is aimed at addressing what’s expected to be a satellite traffic jam in low Earth orbit.

TruSat is an initiative led by ConsenSys Space in partnership with the Secure World Foundation, the Society of Women in Space Exploration and Moriba Jah, a space scientist and aerospace engineer at the University of Texas at Austin.

It’s aimed at analyzing the naked-eye satellite observations that are made by volunteers and submitted via the app, to come up with more accurate information about the orbits of thousands of satellites. Blockchain technology, which is best known as a software-based foundation for cryptocurrencies, would be used in this case to provide transparency about the source of orbital data.

Israel said ConsenSys Space currently has seven employees distributed in different parts of the country. Only Lewicki is based in Redmond, he told GeekWire.

In a statement, Lewicki said Ethereum was a key part of the TruSat system.

“Designing a system that is at once open, autonomous, and resistant to malicious and erroneous inputs presents considerable engineering challenges,” Lewicki said. “A big part of what makes this possible — what allows users to have confidence that neither the algorithms nor the output have been tampered with — is the Ethereum blockchain technology integrated throughout our roadmap.”

He emphasized that the TruSat system is still in early beta mode.

Version 0.1 of the software, released today, is an engineering prototype with limited features. It’s meant to validate the core software engine that determines a satellite’s orbit based on observations from multiple points on Earth.

“This first release is primarily for testing by the dedicated community of hobbyists already active in tracking satellites,“ Lewicki said.

Such hobbyists have been trading their reports about orbiting spacecraft — including classified spy satellites — for years on online forums such as SeeSat. The initial database for TruSat is seeded with SeeSat observations.

TruSat will serve as an experiment to see whether such observations could form the basis of a trusted, decentralized data management system for space applications. At a reception to unveil the venture, Lubin called TruSat “the first step in our mission to democratize, diversify and decentralize space endeavors.”

“What could we accomplish in space if we could harness the contributions of every person on Earth wishing to contribute?” he asked. “What if every fan of ‘Star Trek,’ ‘Battlestar Galactica’ or ‘Star Wars,’ or every space hobbyist, or every stargazer could be part of a citizen space organization, rather than ceding such privileges to nation states or heavily funded companies? … We formed ConsenSys Space to find out.”

“The person asking generally assumes we’re getting into the business of harvesting the natural resources of celestial bodies,” he said. “Instead, as you now know, we’re working to harness the human resources of this celestial body — all the talent, wisdom and creativity currently sitting on the sidelines — and convert this potential energy into space progress.”

Lewicki told GeekWire that ConsenSys Space wasn’t expecting to profit from the TruSat experiment. “It’s purpose is a global public good,” he said. However, the experience gained as a result of the experiment could be folded into future ConsenSys Space offerings — for example, an online marketplace for space data, capable of generating transaction fees.

Satellite experts say space traffic management is likely to become far more challenging in the years ahead, due to the rise of broadband satellite constellations such as SpaceX’s Starlink system and Amazon’s Project Kuiper.

Last month, the European Space Agency reported a close call involving its Aeolus wind-measuring satellite and a Starlink spacecraft — and said the incident served as a warning sign. “As the number of satellites in orbit increases … today’s ‘manual’ collision avoidance process will become impossible,” ESA said in a tweet.

The issue is likely to come up next month at ESA’s ministerial meeting.