Social Media Essentials: Catch up on the top news in social media this week

LinkedIn boosts its messaging with pre-written, AI based interactions

LinkedIn unveiled a new smart reply feature in its messaging app, which gives users prompts with different phrases to use while they are chatting to keep the conversation going. For example, you may see generic suggestions such “Yes I am,” or “Sure!” or “What time?”

You can now PayPal friends in Messenger

PayPal users in the U.S. will now be able to send and receive payments over Facebook Messenger. The update also includes PayPal’s first customer service bot for handling customer questions. The Messenger bot and P2P payments option are going live today for Messenger users in the U.S., and will rollout globally soon.

Facebook has released new guidelines that outline how publishers can adapt to the company’s efforts to fight back against fake/false news and other low-quality content. You can find the guidelines here.

Instagram announced that it would let users who run live video streams add guests into their videos. According to TechCrunch, the feature works by letting people who are streaming a video to add anyone who is watching the video at that moment. 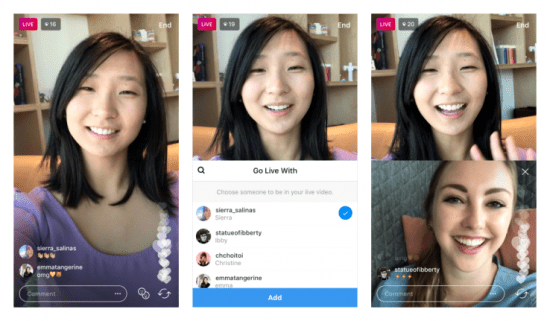 Facebook has confirmed to TechCrunch that it’s testing 4K video uploads and viewing using the 2160p UHD-1 Ultra-High-Definition Television standard. So far we know that some pages and profiles can now post 4K videos. To start viewing video on 4K make sure you’re watching on the maximum resolution by hitting the gear icon on a Facebook video and switching to 2160p, which is 4K.

In response to political scrutiny over the role it may have played in spreading Russian misinformation, Twitter has launched a Advertising Transparency Center where according to Techcrunch users can see all the ads running on Twitter, the content/creative of those ads, how long they’ve been running and which ones are targeted specifically at you. It will also allow users to report an ad as inappropriate if they feel it shouldn’t be allowed or just don’t like it.

Brands are trying in more ways than ever to connect with audiences across a range of social platforms. It is becoming harder for brands to catch our attention as competition increases and our attention spans have decreased to 8 seconds. Each day users scroll through 300 feet of content, giving brands a very small window of time to grab the users’ attention. Therefore, how can your brand start building ideas that work for the speed of feed? We have identified five key trends we believe will have the biggest impact on your social media strategy in 2018. As well as asking 10 social media experts what they think the upcoming trends for 2018 will be. Read the full post here.

What do you think of Facebooks 4k videos? How do you feel about Twitter’s transparency center? We would love to hear your opinions, so why not connect with us on Twitter, Facebook, Instagram or LinkedIn and join us next week for another weekly roundup.