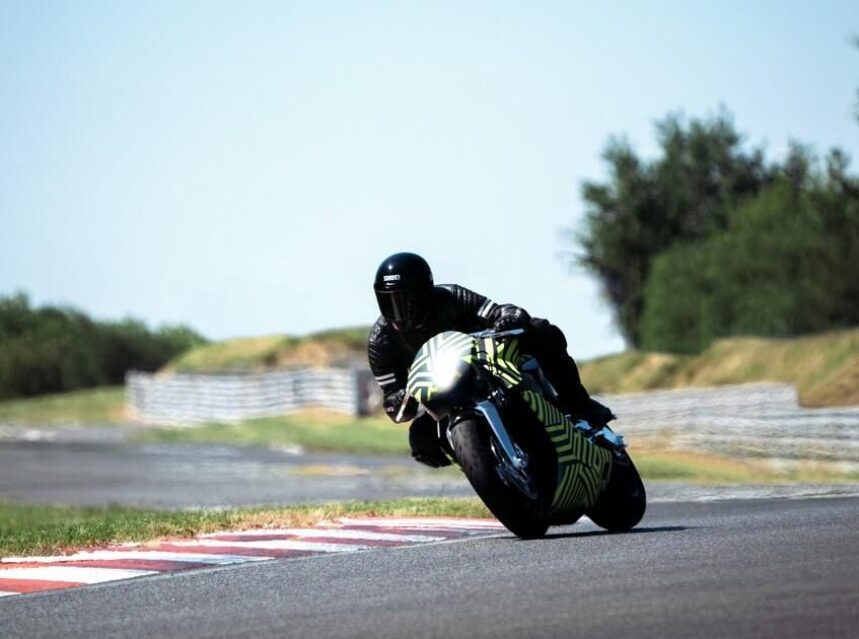 In late 2019, Aston Martin and alive-again-dead-again motorcycle brand Brough Superior announced they’d be getting together to create a very expensive and exclusive turbocharged motorcycle. And happily, this didn’t turn out to be vaporware, because Aston Martin released the first video of this new motorcycle being tested on Wednesday, seen on track in France at Pau-Arnos. I have to say, Aston’s distinctive camouflage suits it well.

“Everybody involved has managed to make tremendous progress with the development of AMB 001, despite the challenges we have all been facing,” Marek Reichman, chief creative officer for Aston Martin, said in a statement. “This special motorcycle is, like our road cars, the result of beautiful design melding with modern technology to produce a bike that any collector will be proud of. We are delighted to see how much progress has been made, both on and off track and look forward to the moment when production starts for this stunning machine.”

The AMB 001 is a track-only motorcycle with a turbocharged V-twin engine that produces just 180 horsepower. I say “just” because the Ducati Streetfighter V4 I recently reviewed doesn’t use turbos but makes 208 hp. It’s all about perspective, though. Turbocharged engines are known for torque, and since Aston has yet to disclose this engine’s torque rating, perhaps this is where it has the upper hand?

The bike is constructed out of a combination of aluminum and carbon fiber, and appears to have a wafer-thin seat, which can’t be great for long rides. Still, the AMB 001 is a looker, and that’s good because it brings me to the next somewhat disappointing piece of information: the cost.

The AMB 001 will retail for the equivalent of $122,000, and there will only ever be 100 of them. With figures like these, it seems doubtful that many of these bikes will ever see real track time, but it’s an interesting exercise nonetheless. Production is set to begin at Brough-Superior’s French factory in the fall.