When DoubleClick debuted in 1996, and AdWords in 2000, the world of digital marketing wasn’t nearly what it is now. As today’s complex digital reality has shifted the way we think about marketing, and how we measure it, Google’s products have evolved to keep up with the times.

Google’s Senior Vice President of Ads & Commerce, Sridhar Ramaswamy, broke the news on June 27, 2018, that Google’s saying goodbye to “Google AdWords” and a slew of other brand names, in addition to introducing a new unified solution: the Google Marketing Platform.

Built upon existing integrations between the Google Analytics 360 Suite and DoubleClick solutions, the new Google Marketing Platform brings the great results marketers have seen from using ads and analytics technology together to 360 Partners — like us.

You may have noticed when you were updating your Data Retention Settings in lieu of GDPR on May 25 that there was the new ability to create an “Organization” in the Google 360 Suite whether you had Google Analytics 360 or not. This was the first interface test for the new Integration Center. 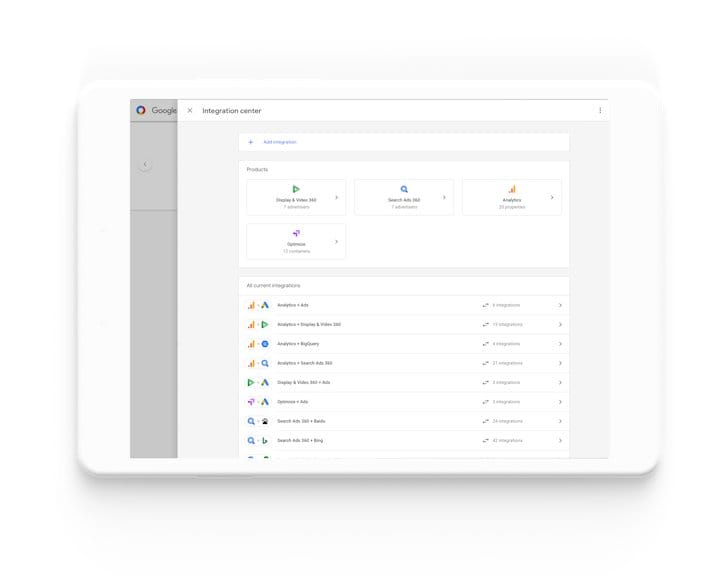 The new Google Marketing Platform provides the Integration Center for better control and management of the Google products linked to your company.

Whether you have Google Analytics 360 or not, the new Google Marketing Platform announcement means you’ll soon benefit from a greater visibility into your marketing products and how they’re being leveraged holistically across platforms and properties.

You might still be wondering, “what does the Google Marketing Platform replace?” In short, the new GMP replaces one of Google’s advertising products, and changes some others, including:

The new Google Ads brand is a representation of the full range of online advertising capabilities offered by Google and their partners.

Make no mistake, Google Ads is more of a branding decision than major platform news. Google is focused on providing more value to small business users of Ads. The new Google Ads platform encompasses advertising on all of Google’s advertising networks.

At the upcoming Google Marketing Live Event on July 10, we’ll get more detail on the new campaign types and features available within Google Ads.

Before it was pretty exhausting to keep track of your online advertising if your spend was spread across multiple properties and platforms offered by Google. But even more valuable, you now have unlimited access to more niche platforms in addition to standard Google Search. Some you may not even considered viable in the past — such as YouTube, Google Maps, Play Store, Waze, and more.

In an effort to streamline the way publishers monetize their content, Google is unifying DoubleClick for Publishers and DoubleClick Ad Exchange into a new programmatic platform, simply named, “Google Ad Manager”.

With Ad Manager, you get a complete ad platform that helps you earn more and grow revenue, no matter how or what you sell. Google’s move away from traditional Sell-Side Platforms (SSPs) and into the space of programmatic means that machine learning will be at the forefront of digital marketing campaigns curated in Ad Manager.

Leveraging this programmatic framework means you have new opportunities for monetization across different screens, SDKs, and content distribution platforms. Ad Manager will offer sophisticated features like Optimized Competition, Dynamic TV Ad Insertion, and on-demand video in a range of formats (native, 6-sec bumpers, etc.) to provide the most value to your audiences.

If you don’t want to miss out on a more in depth look at the rebranded platform and the new features/tools within it, sign up to watch the livestream of Google Marketing Live on July 10. Seer will be providing a recap of the event and updating this post based on any new announcements made regarding Google Marketing Platform, Ads, and/or Ad Manager.

Let us know what your thoughts are on these announcements in the comments below!