Burning, which is the first film directed by the Korean master Lee Chang-dong since 2010’s Poetry, begins as the desultory story of a hook-up between a pair of poor, unmotivated millennials – the girl already a lost soul, the boy a wannabe writer saddled with a criminally angry father. The addition of a Porsche-driving third millennial with a swanky apartment in Seoul’s Gangnam District not only ramps up the tension between the two instantaneously but creates one of the most infernal romantic triangles in modern Asian cinema. Entering its third act, the movie morphs into a noir-steeped psychological thriller with an investigative element. The end is explosive.

His lips forever parted in seeming incomprehension, the passive protagonist Jong-su (Yoo Ah-in) has done his military service and his degree. A fan of William Faulkner, Jong-su works hard at not writing novels, instead doing menial jobs and tending the decrepit farm where he was brought up as a child, his dad having been arrested for an act of violence. (Jong-su’s mother and sister left years ago.) The farm lies so close to the North Korean border that Jong-su can hear the daily propaganda broadcasts, which stoke the film’s growing unease, as does the muttering bass-heavy score. 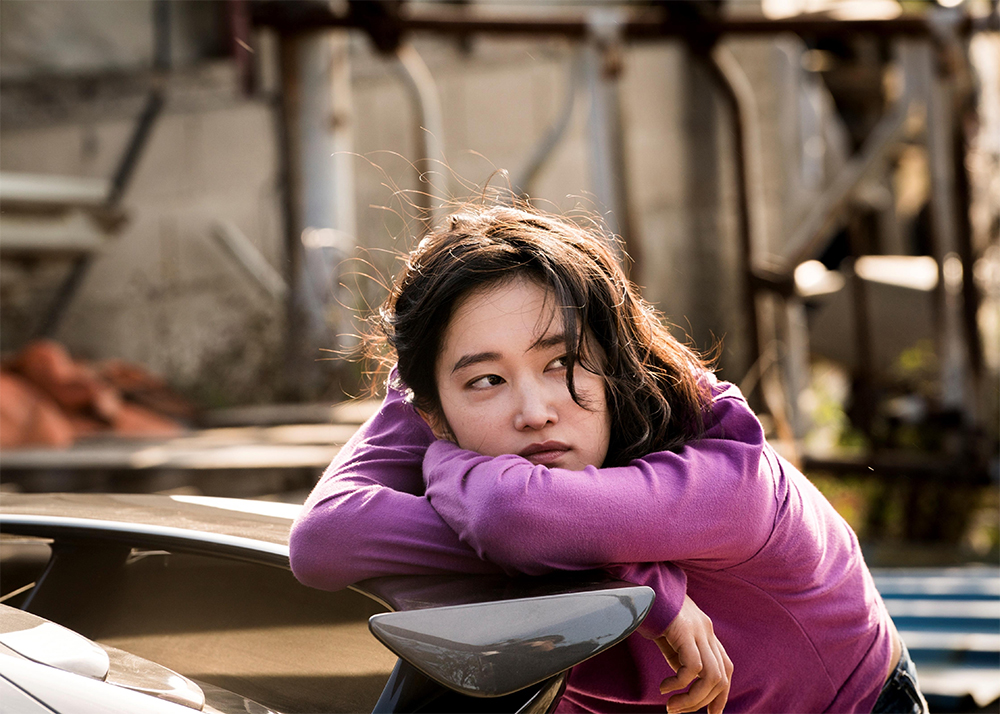 Dropping off some goods at a Seoul market, Jong-su is recognized by Hae-mi (Jun Jong-seo), who hails from his border village and was once his neighbor and schoolfellow. She harbors nostalgia for their childhood and resentment toward him because he called her “ugly” the only time he spoke to her. Currently working as a part-time promotional dancer, she’s quick to tell him how pretty she is now thanks to plastic surgery. They go for a smoke and later to a bar where Hae-mi performs an acting routine with an imaginary orange – she is a creature of ambiguity and illusionism, a femme fatale in the making. She manipulates Jong-su seemingly to avenge his past slight. Her memory of him rescuing her from a well – which she may or may not have invented – reveals she had an unrequited crush on him.

About to leave on a trip to Africa – seemingly “to find herself” – Hae-mi asks Jong-su if he will babysit her cat at her untidy bedsit in a narrow tower block. When he comes to meet the cat, she seduces him. In love with her, he returns to the bedsit three times but never again in her company. The first two times he puts out food for the elusive cat and masturbates to Hae-mi’s memory and a photo of her. The third time he visits, when he is frantically seeking her toward the film’s end, there’s no sign she ever lived there, but the space is haunted by the ghost of their brief affair.

Met by Jong-su at the airport on return from Africa, Hae-mi introduces him to her new friend, the Porsche-driving Ben (Steven Yeun) – handsome, wealthy, and narcissistic. The three begin to hang out, a masochistic proposition for Jong-su, who soon discovers that Hae-mi is sleeping with Ben, if only to taunt his rival. Jong-su is too nice and too artless to object or compete, but as his anguish mounts, he privately observes to Hae-mi that Ben is like F. Scott Fitzgerald’s Jay Gatsby, a rich enigma whose gains are ill-gotten. Ben smugly tells Jong-su that he doesn’t work, he plays – but there’s no way of telling if he’s a financial wizard or a gangster. He is as ambiguous as Hae-mi. 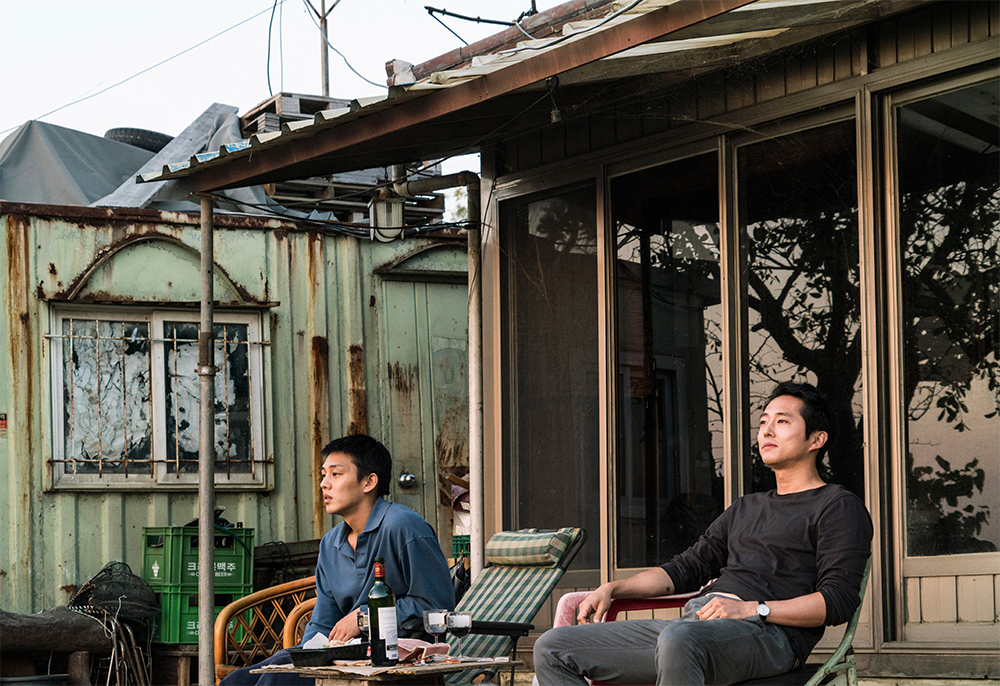 Or is he? When the needy Hae-mi is acting out in a sensual manner before a group of Ben’s friends. Jong-su notices Ben yawning, as he does on a similar occasion later in the film. The yawn betrays Ben’s indifference to Hae-mi  – and probably much worse. During the uninvited visit Ben and Hae-mi pay Jong-su at the farm – the sun sinks as they drink and smoke pot – Ben cryptically tells Jong-su that his hobby is burning down abandoned greenhouses. (Lee and Oh Jung-mi adapted the script from Haruki Murakami’s 1983 story “Barn Burning”). The stoned Hae-mi then performs a languorous erotic dance to a Miles Davis solo and breaks into sobs. Jong-su, seething with sexual jealousy, insults her. Ben drives her away, at which point she evaporates.

The word “metaphor” has been discussed earlier in the film; it’s not hard to figure out what Ben means by “burning down greenhouses” (though a scintilla of doubt about his culpability for Hae-mi’s disappearance remains). Jong-su only half-understands – in his desperate quest to find Hae-mi he searches every abandoned greenhouse near the farm. He then begins to stalk Ben.

Whereas Lee’s Poetry and its predecessor Secret Sunshine (2007) depicted women coping with grievous situations, Burning addresses male grief over sexual humiliation and loss and shows that, not untypically, it manifests itself in rage and violence, which even the mild-mannered Jong-su can only suppress for so long. Lee opaquely connects the madness simmering way at Jong-su, Hae-mi, and Ben’s last encounter to the national instability, the camera swinging around to face the border with North Korea. If alienation and cruelty among South Korea’s millennials are conditions of sociopolitical malaise on the East Asian peninsula, then Burning is a stunningly acted and directed expression of it.