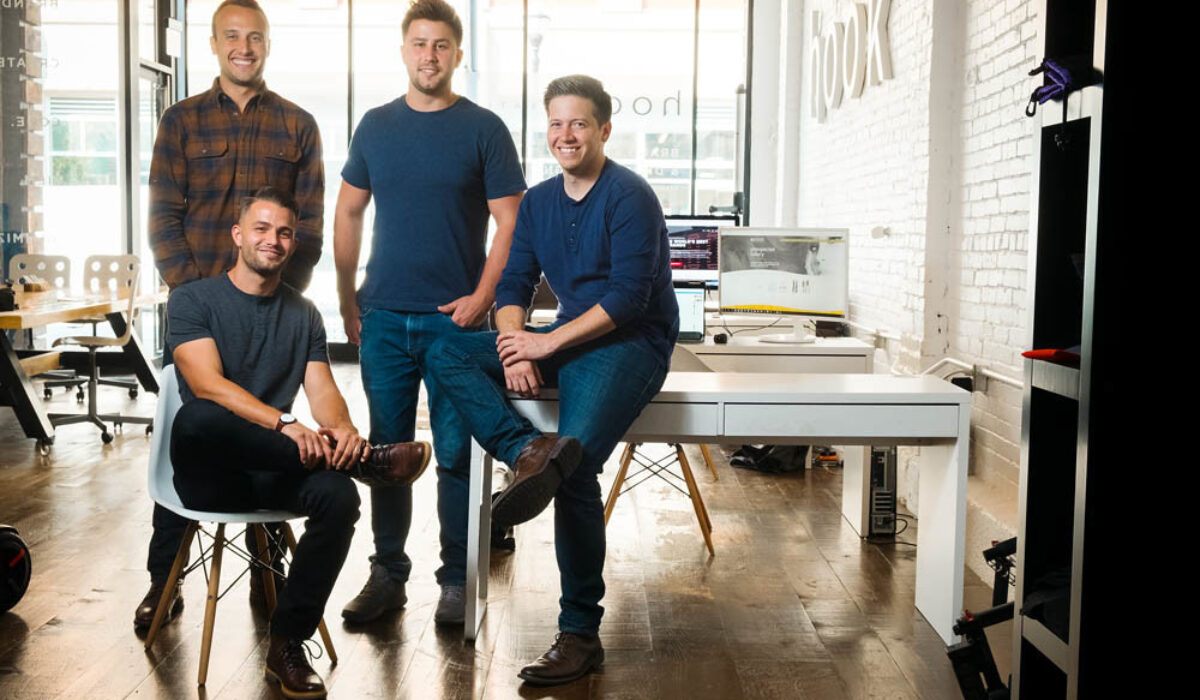 Hook Creative – it started as a fictitious business name for a class assignment at Missouri State University. But in the midst of it, Josh Stewart founded a real company.

Now, Hook Creative has 10 clients on retainer and employs four designers/marketers, who describe themselves as a tight-knit team of fun-loving and hardworking friends.

“We are a small team, but we do a lot of different things,” says Stewart, sitting at the conference table with his crew at Hook Creative’s downtown office. “We all have unique skill sets and have a reserve of freelancers.”

Website design is the bread and butter of Hook Creative – about 65 percent of its work – for such clients as Hotel Vandivort, Phenix Marble Co., Andy’s Frozen Custard and the Greene County Circuit Clerk.

And why not? They’ve had success with that in the past.

Creative origins
Stewart says he followed his father’s footsteps into the creative industry, starting with freelancing.

Then Stewart got an inquiry from Louisiana State University.

“I remember thinking it was a joke,” he says. “There were three companies they narrowed it down to and wanted to meet.”

Hook Creative landed the “sizeable contract,” creating about five websites for LSU’s Health Sciences Center, and Stewart decided it was time to expand. Starting with zero capital, Stewart worked out of his home about six months before entering co-working space on Park Central Square. About that time, he brought on developer Mark Kelly, a friend from high school.

Next to join the team was Stewart’s brother, Nick Stewart, as media specialist.

The team moved to an upper-level office at South Avenue and Walnut Street, where they leased what Josh calls “closet space” for about a year before relocating in October 2016 to 438 W. McDaniel St.

The industrial-style space was a perfect fit for Hook Creative, Stewart says, and the company recently purchased the office from Paul Catlett, a co-owner of Hudson Hawk Barber & Shop, whose logo Hook Creative designed. Hudson Hawk used the space before moving next door.

“Whenever we announced that we were selling, Josh and I got together and there was this opportunity to work with them,” Simpson recalls. “It’s just been a really great fit for me and what I enjoy.”

In the role, Simpson taps into the business streamlining skills he developed with Five Pound Apparel.

“That is one thing I really enjoy doing – looking at a business and how we can create a better system and efficiency that leads to better customer relations, internal operations and better workflow all together,” he says.

Stewart says the team is selective with collaborations and clientele – working only with businesses that align with the goals of Hook Creative. Those clients, he says, are trustworthy, understand teamwork and appreciate the value of good branding and marketing.

“Somebody who is fully on board. It makes life so much easier,” Kelly agrees.

Working with entrepreneurs, especially startups, is important to the team – and Simpson says his experience with Five Pound Apparel and Stewart’s founding of Hook Creative provide an edge.

“We are all entrepreneurs at heart,” he says. “We understand the reality of business because we have been there in our own ways.”

Keeping up with the industry entails adapting to technological advances, which Kelly says is one of the biggest challenges. Google changes its algorithm once a day, updating standards for search engine optimization. Hook Creative must check these changes every couple days to ensure their websites stay on top of SEO.

The team also keeps up with current website trends, putting emphasis on high-quality photography and film.

“There is an undeniable difference between iPhone photography and something taken with a high-end DSLR camera,” Stewart says.

But ultimately the site’s format is based on the target demographic.

“It all goes back to the user,” Stewart says. “If the user can’t find what they’re looking for, then it’s all null and void. Right out of the gate, we try to find who the users are and how we can meet them where they are and make sure they can garner information from the website.”

Stewart says Hook Creative’s workload justifies another employee. But, just like clientele, that person must be the right fit.

“It’s a very fun culture. At the end of the day, we are buddies,” Stewart says. “Work definitely gets done around here, but we have fun doing it.”