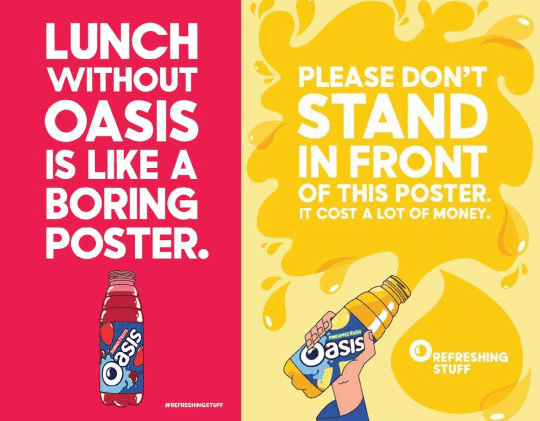 “Self-indulgent, poorly written shite” that screams “me! me! me!” before the needs of the customer.

Over the last few years, Oasis has released campaign adverts that play on the advertising industry. Calling out the behind-the-scenes thinking of adverts in order to appeal to what seems to be an edgier and cooler new generation who it thinks are tired and bored of adverts.

But has it gone too far with the release of its latest line of adverts, by promising to stop all advertising if the brand hits its sales targets? It seems like a cheap gimmick to me that neither inspires nor impresses me to buy Oasis’ drinks.

Also, let’s not forget that it’s also probably a lie just to get people engaging/talking about its ads – will the brand really stop advertising?

Let’s take a look at its full #refreshingstuff campaign and why it’s not really that impressive, or creative.

Adverts that calls out advertising tropes

As marketers and working professionals, we know how much creativity, time and collaboration goes into creating a campaign that has both wide and targeted reach. A campaign that gets your brand in front of the right people, at the right time in order to help build brand awareness, attract media attention and earned links or increase sales.

More seasoned marketers will know the ins and outs of persuasive copy, creative that is striking enough to catch a wandering eye, how much emotion-based selling is enough, or too much, and how to drive the desired action.

But Oasis advertising campaigns make a satire of the advertising industry by creating what seems to be lazy ads.

Back in 2015, Neil Simpson, founding partner at The Corner (the agency behind Oasis advertising), said:

“We want to connect the brand with a new generation of consumers, through an observational take on the modern world.” – CampaignLive.

Its trope adverts ignore everything that’s of value in its actual product and focus too much on the fact that what consumers are looking at is an advert – which they know.

Well, this is one way to keep production costs low since there is no animation or live action screen time. Instead, the brand chooses to show a still graphic of an illustrated Oasis bottle with a 30-second voice-over, again poking fun at what it takes to make an advert but choosing to ignore all the normal conventions.

Adverts that are too self-indulgent

Crass. These ads are crass.

‘Lunch without oasis is like a boring poster’ is just another gimmick about the advertising industry. But somewhere in Oasis’ advertising, it evolved into mentioning sales targets.

Like Julie getting the 9:01am tube from Victoria to Kings Cross cares what sales targets need to be met.

Oasis’ observational view on the modern world, as it puts it, is also far from tasteful when it pokes the men and women equality argument. It’s a poor and emotionless ad that shows that it really doesn’t care about equality, the brand is more about sales and profit. 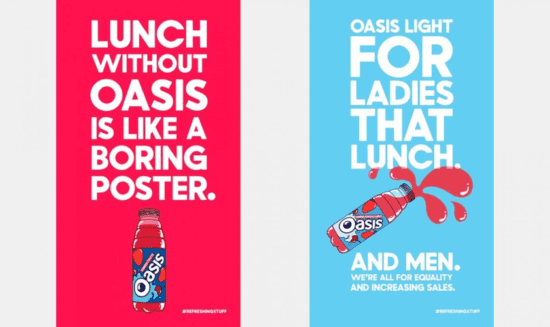 Continuing its #refreshingstuff campaign, this year Oasis has taken it a step further from mentioning the sales targets behind companies, adverts and campaigns. 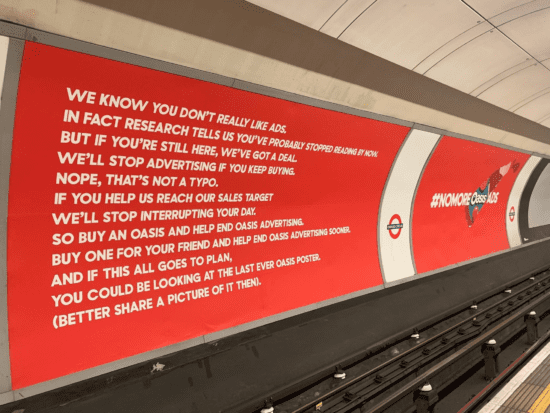 “In fact, research tells us you’ve probably stopped reading it by now” is just its way of saying one of two things:

“Better share a picture of it” is also a rather pathetic attempt at showcasing the satire of online PR.

Or is the essential problem with the ad, not the tongue in cheek humour, but the fact no one believes it? 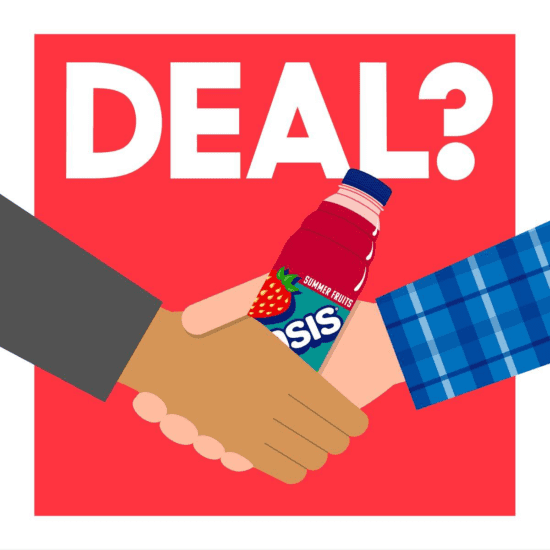 But everyone is talking about it so it’s been successful

So far I’ve only seen fellow marketers and those in the advertising industry talking about Oasis. It seems to have offended more professionals than consumers.

Because they really don’t care.

They don’t care about the minimal design, the tropes, the satire or corporations hitting their sales target when there is blatantly no benefit to them for buying.

They care about themselves and what benefits they gain from buying products.

What do consumers really care about?

The whole ‘our marketing is shit’ thing doesn’t really appeal. If you’re targeting the people that don’t like seeing ads, find ads disruptive or in many cases have ad fatigue, make better ads!