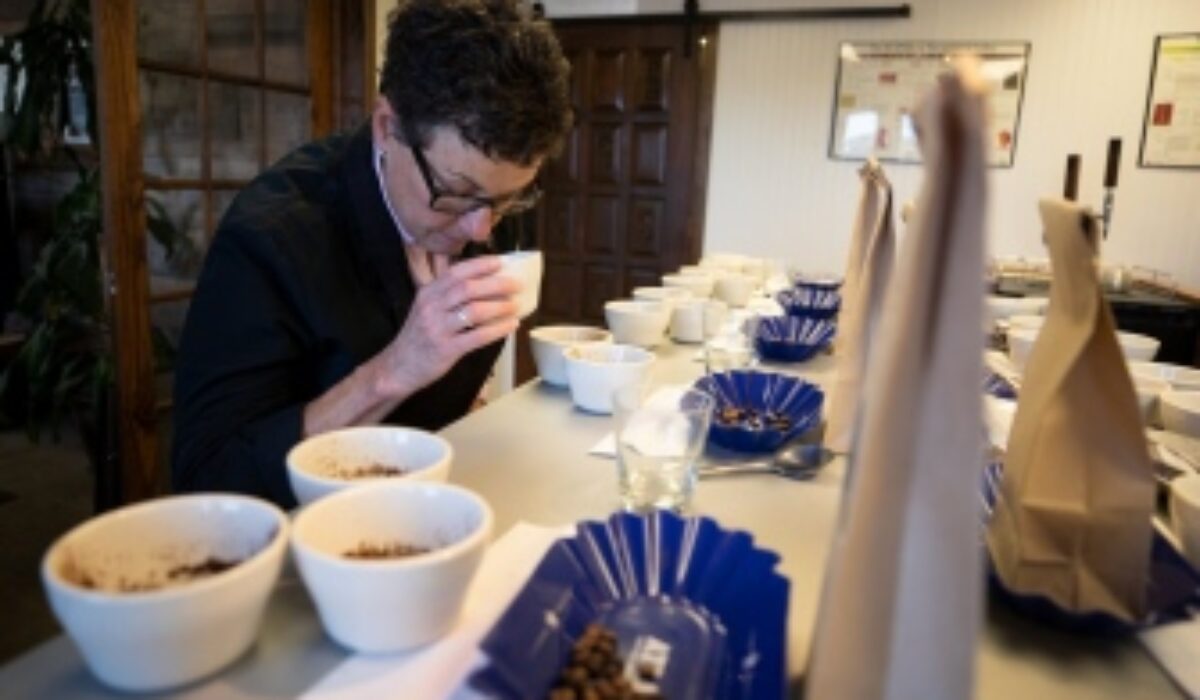 MARK MORAN / STAFF PHOTOGRAPHER Nicole Farber is the founder and CEO of ENX2 Marketing in Dallas Twp. The digital marketing business has grown to include another location in Plains Twp.

Today marks American Business Women’s Day, which reflects on the contributions and accomplishments of millions of women business owners in the U.S. and all working women.

After working in the banking industry for many years, Mary Tellie faced a personal dilemma: she couldn’t find a good cup of coffee in Scranton.

Her personal motivation and passion for coffee perfection led to her founding Electric City Roasting Co. in 2003 and her business has continued to grow.

Electric City Roasting Co. is based in Throop and last year, Tellie opened a new coffee shop near the Blakely Borough Recreational Complex and another location in Mohegan Sun Pocono in Plains Twp. The company’s coffee also is sold online and in stores such as select Wegmans and Weis Markets.

Tellie formerly owned Zummo’s Cafe in Scranton, but sold that in 2014 to Jason and Robin Berndt to carry on its legacy. The cafe serves homemade food and continues to feature coffee from Electric City Roasting Co. After the sale, Tellie turned her full attention to roasting coffee.

Tellie, a certified barista, has been featured as one of the top 10 women in the coffee industry by Barista Magazine and she has been featured in Roast Magazine. Her award-winning coffee starts with beans selected from across the globe and she works with farmers around the world to create trade relationships.

She has served as a judge for U.S. and world competitions about who could prepare the best cup of coffee. She also has served as chair of the Roasters Guild. There aren’t many women coffee roasters throughout the world but the number is growing, she said.

“I love to be a trailblazer in the coffee industry,” Tellie said. “My passion was always with coffee and traveling to coffee-producing countries and meeting with farmers and creating sustainable relationships.”

Tellie speaks highly of a selection of coffee she sells that is produced by women who play essential roles on farms in other countries.

“They’re trying to raise a family and raise a crop,” said the 54-year-old entrepreneur. “I try to seek out these women and see if I can help them. It’s my way of recognizing that against all odds, they did it.”

Tellie said the secret to her success has been “hard work and maintaining a disciplined process with everyone in the supply chain to working to making sure that everyone is vested partners, including my amazing team.”

She said she tries to instill values in everyone to “never settle” and “always try to be the best.”

As a result, she said everyone is a winner, including her team and the consumer who gets a great cup of coffee or cold brew.

“Team members are proud to wear the Electric City Roasting Company aprons. They know the values we stand for,” Tellie said. “We love our product. We love what we do and we are proud to stand up against anyone every day. We promise if you taste our product, you will always get a great product.”

She said the number of women who own businesses is growing and she believes the biggest challenge is that “women are still paid less than their male counterparts for the same jobs.”

The Pennsylvania Commission for Women, announced as part of Gov. Tom Wolf’s commitment to close the “gender pay gap,” will host a series of salary negotiation workshops for women across the state at no cost.

Workshops will be held Wednesday, Oct. 16, at King’s College in Wilkes-Barre and Tuesday, Nov. 19, at the University of Scranton from 5:30 to 8 p.m.

In Lackawanna County, there are 4,533 women-owned businesses according to the most recent U.S. Census data available, said Lisa Hall-Zielinski, director of the University of Scranton Small Business Development Center.

Women entrepreneurs in Luzerne and Lackawanna counties recently discussed some challenges they faced when starting their own businesses and shared their secrets to success.

After her son was born, Farber said she immediately put all her focus on him.

“I knew it was me who had to do it,” she said. “It takes so much work and perseverance, but I really set out to do all I needed to do for him.”

As a single mother of an only child, Farber has faced a number of challenges.

After living in a small two-bedroom apartment for years, she recently bought a home in Dallas Twp. where she lives with her son.

Sometimes, they drive by their former apartment and she sheds tears and says to her son, “Look how far we’ve come.”

The 40-year-old entrepreneur formerly was the director of cancer wellness and resource center Candy’s Place in Forty Fort.

READ ALSO  Must-Attend Marketing Conferences Before the End of 2018

While this was a rewarding career helping cancer patients and their loved ones, she made a decision in 2013 to start her own business.

“I loved that job. I truly did,” she said. “I was helping a lot of people. It was emotionally rewarding in every aspect but it also was emotionally draining because I care so much.”

She started a digital marketing business off small in her home. It has since grown to include her office in Dallas Twp. and another location on North River Street in Plains Twp.

ENX2 Marketing focuses on social media, search engine optimization, web development and design, video, photography and email campaigns. The business has clients throughout the nation and its niche is legal marketing for law firms.

Farber credited her father for creating the design of her Dallas Twp. office and building it. Inside her business, she eagerly introduced her staff and said she likes to be surrounded by good people with creative minds. In all, she employs 17 people.

“This has really been a gift to me. You have all different kinds of clients. You never get bored. You get to consistently keep being creative,” Farber said. “I love to lead people. I love my team.”

She named her business after her son and her as a team: Nicole and Nikolus times two with a silent upside down e in front.

While it was a risk for her to leave a secure job that she loved and start her own business, Farber said, “I knew there was something more and I followed it because I always follow my heart.”

“I had to make it so that I could do the best I could do for my son because he is the most important,” she said.

In the beginning, she said it was difficult starting her business.

“I was so tight on money,” she said. “I had quite a heavy load on me with my apartment, my car, my son, medical bills and I had no money coming in and I did not know what to do and I was taking care of my elderly grandmother.”

She said the secret to her success has been “giving in every way possible.”

“I was in a really difficult spot. I just want to give as much as I can to people because I’ve been there and you never know what somebody is going through,” she said, fighting back tears. “For all the heartache I saw in my previous job, I have gained so much wisdom and many other traits and many other things that continuously help me on my path. And I think that’s what makes me a better businesswoman.”