The six-week journey of ISRO’s Chandrayaan 2 through the ever unforgiving emptiness of space has finally ended today. From the first hiccup where the launch was delayed due to a leak in the rocket’s cryo engine to the many orbit-raising manoeuvres around Earth, the complex insertion into the moon’s orbit followed by more orbit manoeuvres around the moon, it’s been rough, and interesting, and this was only Act I. 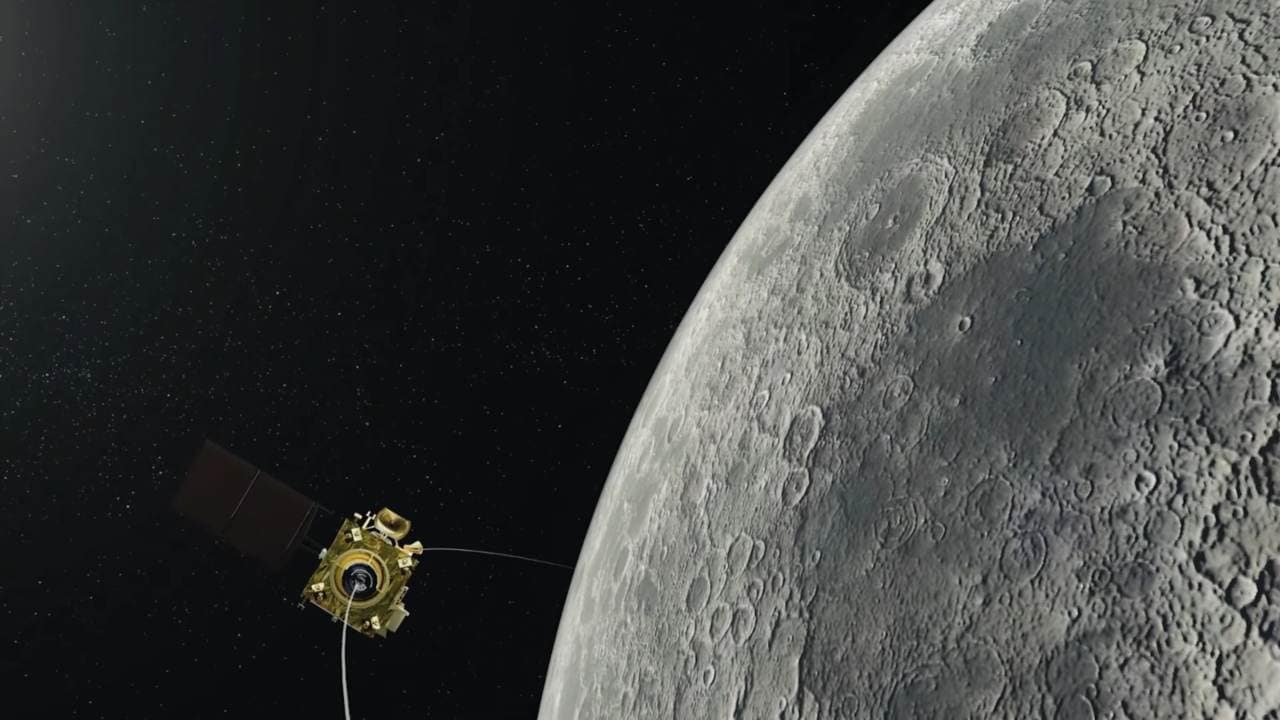 An illustration of the Chandrayaan-2 orbiter in the moon’s orbit. Image: ISRO

Six weeks in space is usually not a big deal for ISRO, with many of its satellites having an operational life of 12 years and more. However, Earth-bound satellites are often built with enough redundancies in terms of having backup hardware for components and sub-systems most prone to failure due to the harsh conditions of space. But Chandrayaan 2 did not have this luxury since the spacecraft needed to also carry all the fuel required for the many Earth and moon orbit manoeuvres. In fact, more than 70% of the orbiter’s total mass was fuel.

Once the spacecraft reached the required 100-Km moon orbit, the Vikram lander separated from the spacecraft, leaving the orbiter to stay behind and continue imaging the moon surface and studying the moon’s atmosphere.

The Vikram lander then became completely autonomous and performed two more orbit manoeuvres followed by a vertical descent over several minutes, easily the most nail-biting minutes of the mission.

It was at the beginning of the last descent phase that ISRO lost contact with the lander. Again, nearly 60 percent of Vikram’s mass was the fuel needed to perform these intricate operations. In this last phase, as per the mission plan, the smaller thrusters were supposed to reorient the Vikram lander, after which the five bigger thrusters would decelerate it to a touchdown velocity of two meters per second. The thrusters would then be turned off several meters above the surface.

If the thruster fires close to the surface, its exhaust will bounce off the moon’s surface and could damage the lander. Dust would also be kicked up and owing to the moon’s gravity, it would be kicked up at high speeds and take a while to slow down. This would pose a threat to the Lander during its operations. Therefore, it is a common practice among such missions to cut thrust well before landing.

(Also read: Support pours in for ISRO as scientists try to figure out what went wrong with Chandrayaan 2 landing)

After landing, while the Vikram lander continues to study the lunar surface near the landing site, the Pragyan rover was intended to separate from the lander and analyse the soil composition while moving about in the vicinity of the landing site.

After all that excitement & anticipation, the Vikram lander may have crashed onto the surface of the moon! While we wait for a confirmation from @ISRO, @woman_rednow brings you a wrap of what we know so far.#Chandrayaan2Landing pic.twitter.com/O1tDme0hNQ

While the orbiter was built to operate for one year, the lander and rover were only built to operate for 14 (Earth) days. A day on the moon is actually about 28 (Earth) days long with nearly 14 days of sunlight followed by 14 days of darkness. The lander and rover would have been powered by their solar panels and their mission life ends after the sunlit period since the instruments were not built to withstand the low temperatures of lunar nights, which can go as low as -130ºC.

Similar missions with longer mission life usually enter a sleep mode when darkness begins to descend. However, resuming operations after the sleep period is another challenge. Given its sparse atmosphere, sunlight hits the moon surface with full force and the instruments need to be sufficiently equipped to handle these rapid and stark temperature gradients.

(Also read: A step-by-step look at the Vikram lander’s 47-day journey to the moon)

Touching down on the southernmost point of the Moon would have certainly been a great way for ISRO to kick-off its surface exploration saga. It was the success of the ISRO’s maiden Mars mission (MOM) that instilled enough confidence in the team to attempt this ambitious soft landing. In the same vein, the success of Chandrayaan 2 would certainly have accelerated progress towards more complex missions to the Moon and beyond.

The landing attempt might have failed, but the attempt has definitely taken ISRO closer to its soft-landing milestone and reminded us yet again that space is hard, even for seasoned players. Given ISRO’s track record of perseverance, a successful soft landing is definitely forthcoming. Further on, one can be hopeful of more such exciting and exhilarating space missions in the future, with ISRO looking to offload routine satellite and launch vehicle development to the domestic industry.

For future science missions, having more and bigger instruments would definitely amplify their science output, but it would need a bigger rocket since the payload capacity of GSLV Mk III is only 4,000 Kg. However, more science potential can still be packed into this 4-tonne limit.

(Also read: How does ISRO’s GSLV Mk-III fare against some of the world’s most powerful rockets?)

For instance, the upcoming Martian Moons eXploration (MMX) mission by JAXA attempting to bring back a sample from the Martian moon Phobos has a launch mass of 3,000 Kg. The mission is being built on the heritage from JAXA’s robotic spacecraft Hayabusa, with several mission-critical instruments developed by German and French space agencies.

Amidst accolades from the global space community on nailing complex orbit manoeuvres in its first attempt, ISRO is already considered a great partner for planetary exploration missions. International collaborations on such complex missions would not only save ISRO much R&D time and budgets but would also be a wonderful opportunity for its engineers and scientists to work together in international and multicultural teams while making history.