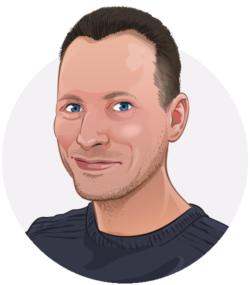 Luc is UX designer and front-end developer at Yoast. He has a Master’s degree in Spatial Planning, but decided to pursue his passion for design, illustration and development after graduating.

Inspiration is at the heart of design. When we – as designers – try to solve a problem we tend to look at what others do. We are often tempted to copy what other companies or websites are doing. This because of their authority: “I’m following Material Design to the letter because Google made it.”. Or because stakeholders point us in that direction: “I want that thing that Airbnb uses on its website.”.

This has led to a point where the entire web starts to look the same (well, kind of). In my opinion, there isn’t anything fundamentally wrong with this so-called ‘design sameness’. It’s ok to be inspired and I personally don’t really care that so many websites look alike.

The danger – in my opinion – lies in the often heard reasoning that designers make decisions because they follow design conventions. And in doing so, they think they’re putting their users first. But, do they really? What exactly are these conventions? Where do they come from? And why do we so eagerly hide behind them?

To help answer these questions, I dove into some of my research from when I was studying spatial planning. I found out that concepts from the domain of public decision-making apply fairly well to the design domain as well.

In this article, I want to walk you through these concepts and the tension field that is present in decision-making. The tension between the complexity and diversity of the context in which we make decisions, on the one hand. And concepts of universally accepted norms (like the public interest and conventions), on the other hand. I also want to try and propose how we can reshape the concept of convention. To claim ownership over it for the use in our design practices.

The public interest as an analogy for design convention

‘The public interest’ is a concept stemming from the domain of governance and public decision-making. And I think that it works very well as an analogy in the domain of design. In the sense that it is very similar to the way us designers tend to use conventions in our work.

In public decision-making, we have two ways of dealing with the public interest:

The distinction lies in a top-down versus a bottom-up approach to decision-making. It’s this substantive, top-down approach that I want to highlight at this point. It reminds us of our attitude towards conventions in design. Accepting the existence of a concept in our practice that is so abstract and elusive holds a danger. It can be used (or abused) by decision-makers to legitimize their decisions: “Our policy is in the public interest, so it benefits everybody.”. Design convention works somewhat the same way. It basically says: “Everybody’s using this, so it must work.”

“In its most limited sense ‘public interest’ is used to express approval, approbation or commendation of public policy.”

Utilitarian philosophy and liberalism (which center around the individual) argue that there’s something fundamentally wrong with the above reasoning. Namely, the total lack of care about individual needs. And this is odd (to say the least), considering we live in a world that is both complex and diverse. This diversity is called pluriformity. It means that there is recognition for different ideologies, cultures and political preferences. And the norms, values and interests associated with it. The concept is therefore often associated with the rejection of the existence of universal norms.

If we translate this to our design domain, we can argue that it is unlikely that universal solutions exist. At least in practice. Considering the diversity and complexity of the different contexts in which problems occur. It seems that the public interest is used as a legitimization for decision-making. Just as convention is used to hide behind the fact that the design lacks research and critical thinking.

Yes, it is a much heard argument that trends and conventions actually do exist in design. We might even need them for our users to understand how our websites work (the most famous example probably being the hamburger menu icon). But how did these conventions originate? That is a fundamental question, that I believe doesn’t get asked enough. The problem with ‘getting inspired’ or ‘following convention’, is that you lack context about problem definition and – solution. We risk losing ourselves in studying the solution and lose track of what the initial problem was.

This leads to information gaps, as Stephen Hay, Head of UX at Catawiki, so strikingly described it in his presentation about design sameness at this years’ Refresh Conference (which served as an immense inspiration for this article). It means that, with each blind application of a convention, problem and solution drift further apart. The problem gets, sort of, lost in translation.

The most striking example of design convention going haywire is probably the use of sliders on the web. You can read our opinion on sliders here.

Isolate the problem with critical thinking

This doesn’t mean that we have to fully reject the concept of convention. Problems re-occur and are not always unique in nature. And not every solution needs to be different or unique. I dare even say that every problem that you face as a designer, has probably already been faced by someone else. Even if you consider the diversity and complexity of the different contexts in which we work.

But what’s critical, is that you first isolate and define the specific problem that you’re facing. And only then move on to the solution. Blindly using a convention as a solution without exactly knowing what it is you’re trying to solve, is simply wrong. Stephen Hay argues that relying on conventions is cutting corners. Especially, considering critical thinking is one of the biggest assets you possess as a designer. Therefore it’s essential that you use just that.

“We rely on conventions because they will often give us an acceptable solution with a minimum of effort.”

The fear of isolation leading to waste

We’ve arrived at a moral crossroad…

Although I very much encourage Hay’s plea for critical thinking. And although I understand the value of isolating the problem you are trying to solve. I also think in doing so, there’s a lurking danger of isolating yourself. Of forcing yourself to come up with something original, different and unique. And in doing so you risk your process becoming a costly effort. Wasteful even. Because, what if every designer tries to fix every problem over, and over again? It would feel like we’re constantly reinventing the wheel. That’s why I opt for actively claiming ownership over conventions.

We think that the open source model is able to prevent wasteful processes. How? Read more about it here.

Scale down and claim ownership over convention

Let me take you back to the domain of public decision-making and the aforementioned public interest. While we’ve established the trouble with treating the public interest as a given. The concept actually is – in a procedural sense – existent and is something that we can control and claim ownership over.

“The public interest is the compromise that comes about with regard to the policy, with the help of the actors involved, within the boundaries of the project.”

It is something that can originate as a solution to a problem that is defined through dialogue. This, within an enclosed context. But, for this to happen we need designers to come together and:

What this means is that we need an arena (just like politicians and decision-makers do). An arena where designers come together and debate the problems they face. And for this to really work it’s critical that the context in which problems (and solutions) occur is also shared. This, to the end that designers can learn from each other. Learn to identify situations more easily. And find fitting solutions more quickly. This, to avoid the risk of getting stuck in a wasteful process.

This way we can turn the concept of convention from something that magically applies to all similar problems, into a commonality. A commonality that’s actually shaped by designers and applicable within a well defined context.

But how do we create this arena and bring these designers together? Actually, these arenas exist all over the web. They’re called communities. Whether they’re platforms like Behance, Dribbble, GitHub (or even Twitter and Facebook). Get-togethers like Meetup. Or movements like the Open Design Foundation. They all have the potential to bring designers together and discuss design.

I’m a firm believer in the concept of open source design as presented in a manifesto by Garth Braithwaite. It lies at the heart of everything this article discusses. And it’s something that we, at Yoast, firmly believe in. It’s about us designers actively participating in discussion. About helping each other by sharing our work. About sharing the context in which we work and the problems we’re facing. And about sharing the solutions we find within this context.

This, to the end that we, designers, look further than just ‘getting inspired’ and seeking individual advancement. But are really able to claim ownership over our work and start creating meaningful conventions and conversations. And, through this, help push design forward.

READ ALSO  This Brilliant New Design Makes the Middle Seat the Best One on the Plane (Guess How Many U.S. Airlines Have Ordered It)
Claiming, conventions, design, Ownership, Yoast
This div height required for enabling the sticky sidebar