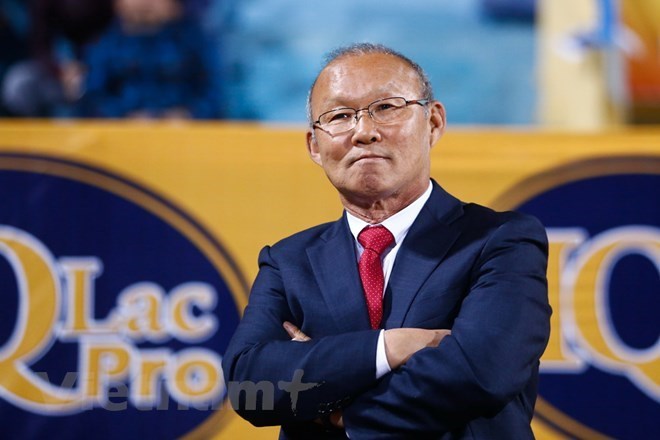 Previously, the Korean coach asked the Vietnam
Football Federation (VFF) to allow him to only manage the senior team. The VFF then tapped Park’s assistant Lee
Young-jin to lead the youngsters.

However, after meeting with Minister of Culture,
Sports and Tourism Nguyen Ngoc Thien, Park changed his mind,
reportedly after gaining a better understanding of the importance of the SEA
Games to Vietnam.

Thien recognised Vietnam’s achievements in 2018
and emphasised the nation’s target of a gold medal at the SEA Games.

Park agreed to lead the team but asked for
strong support from the VFF.

The coach said he needed at least five weeks to
prepare the team as well as more assistants to help him.

He said the VFF must improve three matters -
healthcare staff, nutrition for players and technical assistants – that were
not good in 2018.

He promised if these proposals were met he would
bring home the SEA Games trophy.

“VFF is seeking a fitness coach for the
team after Willander Fonseca quit. We expect to welcome an expert from the
Republic of Korea. We cannot announce his name now but he is experienced
because he worked for Korean teams and clubs,” said VFF General Secretary
Le Hoai Anh.

Park earlier this week called 37 players to
train for the 2020 Asian U23 Championship qualifier in Hanoi. Many of them played for the U20 team that competed at the
2017 FIFA U20 World Cup, as well as U23 and national teams, such as Nguyen
Quang Hai, Tran Dinh Trong, Doan Van Hau, Ha Duc Chinh and Nguyen Tien Linh.

READ ALSO  A 6-Point Guide To Rank Your Business

The VFF said with many U22 players summoned, coach Park
Hang-seo aims to not only improve the team’s strength ahead of the qualifiers
but also prepare for future events, including SEA Games 30 in the
Philippines this November.

As hosts of Group K, Vietnam will play Brunei,
Indonesia and Thailand from March 22-26.-VNA