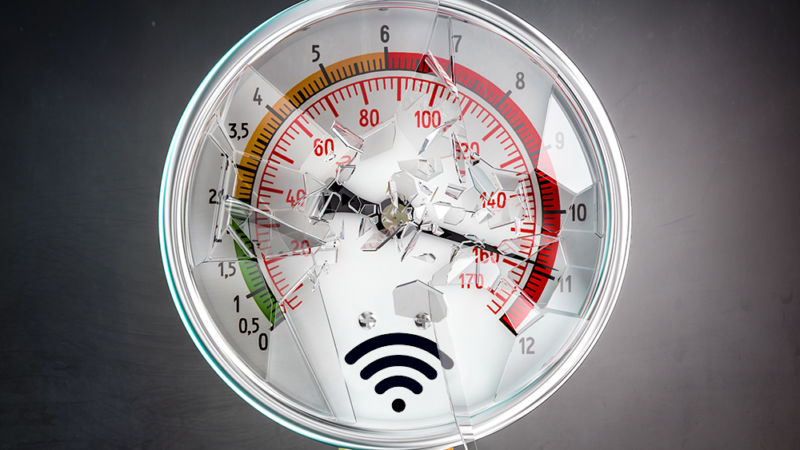 Comcast’s data-usage meter gave thousands of customers inaccurate readings for two months because of a software bug, causing the broadband provider to incorrectly charge about 2,000 users for exceeding their monthly data caps. Comcast has admitted the error and told Ars it is giving refunds and additional credits of $50 each to customers who paid data overage fees that shouldn’t have been assessed.

We contacted Comcast two weeks ago after we heard from a customer in Duluth, Georgia, who found that Comcast was recording major data usage on his account even when he wasn’t using the Internet. The customer, Michael (who requested that we not publish his last name), supposedly had exceeded his 1TB monthly data cap. But when he unplugged his modem overnight, Comcast recorded another 40GB of usage during a 15-hour stretch in which he couldn’t have used any data.

Our inquiry to Comcast and complaints from other customers on social media caused the company to investigate. A Comcast spokesperson told us what the investigation discovered yesterday.

Comcast said it’s still trying to figure out if the bug is in the meter software, the billing software, or in the interaction between the two. What Comcast knows for certain, the spokesperson said, is that the problem was fixed when it rolled back to the previous version of its billing software.

While updating our data usage meter to a new system, a software error occurred resulting in a small number of our customers being billed incorrectly. We’re very sorry for inconveniencing our customers and here’s what we’re doing to address it: We fixed the technical issue, we’re proactively crediting the accounts affected, and we’re giving those customers an additional $50 credit to make it right.

The back-end software upgrade was rolling out gradually, one CMTS (cable modem termination system) at a time, so the data-meter bug didn’t affect most customers. Comcast enforces a 1TB monthly data cap in 27 of its 39 states and charges $10 for each additional block of 50GB, up to a maximum of $200 per month. Customers can get unlimited data for an extra $50 a month.

Comcast told us that a couple thousand customers were incorrectly charged for overages, but the total number of customers who were given inaccurate data readings was likely significantly higher. That’s because the problem caused inaccurate readings in both directions, with some customers getting a number that was too high and others getting a number that was too low. Also, customers who had readings that were too high wouldn’t necessarily have been hit with overage fees because the readings might still have been under the 1TB cap, and Comcast allows two courtesy months before billing for overages.

Comcast said the inaccurate readings affected a fraction of 1% of its customers, but it declined to provide a more specific number. Because Comcast has 27.8 million broadband subscribers, a fraction of 1% could be tens of thousands of customers.

Comcast told Ars that it was able to identify the customers who were wrongly billed overage fees and is proactively applying the bill credits and $50 additional credits to those customers’ accounts. Customers don’t have to contact Comcast in order to get the credits, and the company will reach out to people who were inaccurately billed to explain what happened, Comcast said.

The problem wasn’t isolated to one state, as Comcast said it affected customers in states from the company’s Central and Western US divisions. Comcast doesn’t enforce data caps in the Northeastern US, where it generally faces stronger competition.

Comcast still has work to do. Even customers who weren’t overcharged might see inaccurate data counts or the words “not applicable” instead of a specific number if they check their accounts today. Some customers may see higher-than-actual data readings while others may see lower-than-actual data readings, Comcast said. But the company told us it will be able to update customer accounts with accurate readings for the August-September period.

Comcast also needs to figure out how to deploy its new billing software without triggering the problem again. Comcast said it purchased the software from a vendor and that it is supposed to be an upgrade over its current billing system.

While the company is still investigating the exact nature of the bug, Comcast told us that the bug “redistributed” the data counts in an inaccurate way, perhaps meaning that some people’s data usage was wrongly applied to other people’s Comcast accounts. The decision to roll back to the old software on October 2 gives Comcast engineers time to figure out exactly what happened and do further testing before attempting to reinstall the new software.

Some customers are already seeing changes in their data usage readings. Michael’s data usage readings went back to normal after a Comcast technician swapped his modem for a new one. That occurred before Comcast discovered that the problem was in its billing software, and it’s not clear why a modem switch would have had any effect on his problem.

This isn’t the first time Comcast has incorrectly counted data usage. In December 2015, we wrote about Oleg, a programmer from Tennessee who was accused of using 120GB of data while he was overseas on vacation. Comcast insisted that someone must have hacked into his Wi-Fi network and used the data. But when Oleg subsequently disconnected his cable modem for a week, Comcast’s meter kept counting data that wasn’t being used. Comcast finally admitted its mistake and said the company had entered his modem’s MAC address incorrectly into their billing system.

We detailed other problems in our September 2016 feature “Tales from Comcast’s data cap nation: Can the meter be trusted?” In one case, Comcast admitted to Ars that a “table display bug” caused inaccurate data readings for a customer.

The process of disputing data-meter readings is tedious and often infuriating for customers because Comcast offers no way for users to verify that individual data readings are correct. Comcast customer service reps are also quick to blame customers and insist that Comcast’s data meter is infallible, even when customers measure their own usage and find possible mistakes in the Comcast meter.

Michael Goldsberry, who has been helping his parents in Hinesville, Georgia, deal with a Comcast data-meter problem, told Ars that Comcast offered his parents a credit after weeks of insisting that the meter readings were accurate and that his parents might have been hacked. (To be clear, we are quoting two different people named Michael in this article.)

“What really gets my blood boiling is during the entire process, even with executive complaints filed twice, Comcast employees were extremely dismissive,” Goldsberry told Ars. Comcast employees took the position that “our stuff is right, and no, we’re not going to help give you metrics so you can determine for yourself if there is a problem,” he said.

“If [Comcast] wants to have caps, I think there needs to be better disclosure and tools for the employees, especially now we have proof that it can be horridly wrong,” Goldsberry also said.

Michael, the customer from Duluth, Georgia, told us he had a similar experience:

The first couple of calls to customer service, the reps told me that their measuring of data is accurate and it must be that I’m using the data, or a faulty device. I told them that isn’t so, and they told me basically that I was wrong and tried to sell me a $50-per-month upgrade to unlimited data.

As we previously noted, Comcast incorrectly counted data usage in Michael’s home while his modem was unplugged. Michael told us that he continues to be a Comcast customer “because they are a quasi-monopoly and there isn’t much of a choice.”

Comcast probably wouldn’t have such crappy customer service if they had real competition. Also, since they admitted that the data problem was their fault, they should never again tell a customer that it’s impossible for the data meter to be inaccurate. In essence, they put the burden on the customer to prove that the data is being measured improperly.

To assure customers that its meter can be trusted, Comcast has paid consulting firm NetForecast to verify the accuracy in a subset of customer homes for several years. We detailed NetForecast’s measuring process in our 2016 feature. The latest NetForecast report found that Comcast’s data meter in 2018 undercounted customer usage by 1.5% on average.

Comcast CEO Brian Roberts once claimed that Internet data is just like electricity and that customers who use more should pay more. But unlike regulated utilities, Comcast faces no government oversight of how it measures data usage.

The Federal Communications Commission abandoned its primary regulatory authority over broadband providers when Chairman Ajit Pai led a December 2017 vote to kill net neutrality rules and deregulate the industry. The FCC vote left it up to the Federal Trade Commission to prevent customer harm, but neither agency seems to be doing anything to ensure that data-cap meters are accurate.

“This seems like an issue that the FTC should look into,” Michael told Ars. “People just have to take [Comcast’s] word on how much data they use and are billed for, and Comcast has proven themselves to be irresponsible at this task.”