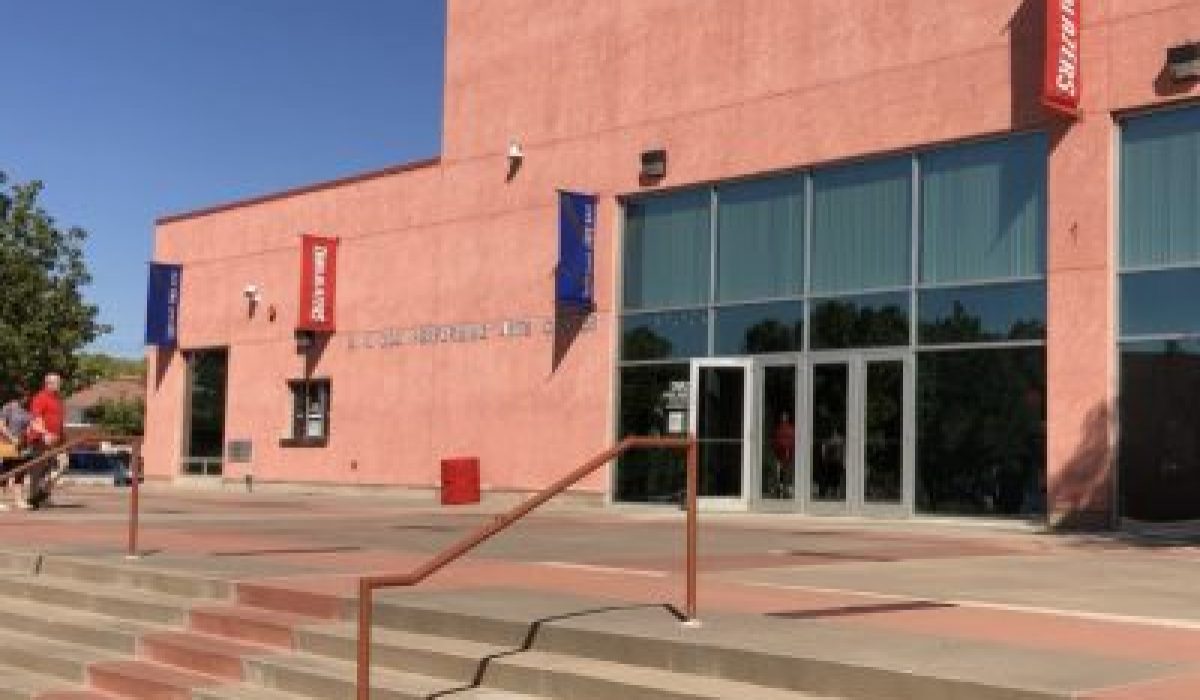 ST. GEORGE — Dixie State University faculty and staff reviewed implementation of the institution’s five-year strategic plan and announced the beginning of a new plan during the annual “State of the University Address” in St. George Wednesday.

In 2015, the university devised a strategic plan, “Status to Stature,” and released a final report that outlined six goals two years later. President Richard “Biff” Williams shared the individual successes within each goal during his almost 40-minute presentation at the M.K. Cox Performing Arts Center on the Dixie State campus.

“We focused a lot on strategic enrollment,” Williams said. “If you tried to park today, you know that our enrollment is up.”

Dixie State welcomed its largest freshman class in the university’s history this year. In 2013, the institution had 8,147 students enrolled and has touted a 26% increase in enrollment over the last 6 years, welcoming about 9,950 students to campus in 2018.

Through structured enrollment programs, the university decreased academic failure by 8% and increased fall-to-spring retention from 67% to 83% between 2018 and 2019. Structure enrollment includes optimized on-boarding, peer coaching and Trailblazer Connections courses that help students through every part of their college experience until they can stand on their own.

Williams said the university is also putting more money into the study body. Dixie State awarded 50 scholarships and $20,000 of ongoing project funding in 2019, more than doubling in a period of three years.

In the future, the university is planning to continue to expand the Peer Coach Programs, create Atwood Retention Grants and implement general education reformation and alternatives to mathematics courses.

The second goal of the current strategic plan is to increase student awareness of and access to engagement opportunities.

In 2018, the university added three graduate degree programs — athletic training; technical writing and digital rhetoric; and marriage and family therapy — as well as three undergraduate degree programs, including applied and computational mathematics; marketing; and health sciences, which is the first of its kind in Utah.

Within the next year, Dixie State will be bringing a Master of Science in Applied Kinesiology and Doctor of Occupational Therapy. Seven more undergraduate degrees and certificates were also announced, including computer engineering, respiratory therapy and information technology.

Dixie State has launched over 35 businesses, filed 91 patents, incubated its first business and served 650 entrepreneurs within its innovation program. Williams announced that the first product patented within the university — MedLite ID — is heading to market in the near future.

With more programs comes the need for more infrastructure, Williams said. The university will be holding a ribbon-cutting ceremony for the Human Performance Center on Nov. 13, and a ground-breaking ceremony for the Science, Engineering and Technology building — for which the Utah Legislature allocated $50 million — is scheduled for Oct. 23.

The university is also planning to begin construction on its newest student housing project, Campus View II, which was recently approved by the city.

Williams introduced the third goal, which is to invest in the faculty and staff. The university recognized 348 employees who were making less than 100% of the median market in 2016, with only 28% hitting that goal.

Dixie State allocated millions of dollars to compensate workers and ensure all full-time employees were making at least the average wage. This year, 223 employees will fall below making 100% of the median market unless the university can allocate about $500,000 to employee compensation.

READ ALSO  What Is Content Seeding & How Does It Work? [Examples]

The Utah Legislature has helped the university facilitate a 2.5% pay increase across the board, with $165,000 allocated to faculty promotions, $171,000 for market equity adjustments and $107,000 for additional equity.

Supporting the success of underrepresented students was the fourth goal Williams touched on. The university recently hired Chief Diversity Officer Tasha Toy, who completed a campus climate survey. Dixie State has also hosted a number of minority student fairs and began a busing initiative which brought students from all walks of life to the university.

The university brought 48 high school National Association for College Admission Counseling counselors to campus. The initiative brought 30 Los Angeles students and 48 Copper Hills High School students to campus. All 48 students were admitted, with 33 of them being racial, ethnic or sexual minorities. Twenty-one enrolled at Dixie State.

Dixie State set a goal to increase minority student admittance to 60% and has surpassed that goal by 4%, according to Williams.

Diversifying campus also extends to faculty and staff. Of the already-hired employees, 57% are female, 17% are minorities and 2% are veterans. Dixie State has also received a number of employment applications, with over 43% of the applicants being female, over 22% being minorities and almost 4% being veterans.

The institution’s fifth goal is to strengthen the relationship between its students, faculty and staff and the Southern Utah community.

“A university should be the center hub of the community,” Williams said. “We want this community to know that we feel accountable to them. We want to serve them.”

Last month, Dixie State held a ribbon-cutting ceremony to celebrate the opening of the Interstate 15 tunnel. Now, the university is working to advance its Trailblazer Engagement Center with increased mentoring efforts.

Dixie has submitted an application to earn a designation as a Carnegie Engaged Classification.

With a number of alternative spring break programs, seven study abroad locations and international students from 38 countries with confirmed admittance to potential students from five new countries, Williams said the university is working to give its students well-rounded opportunities.

The institution focused its efforts on the alumni, establishing the Legacy Initiative, promoting greater event attendance and creating additional benefits such as Dixie Deals and the traditions app. Williams also spoke about the university’s website redesign, which he said has new content, is more user-friendly and uses more efficient search engine optimization.

Dixie State rebranded its mascot from the Red Storm to Brooks the Bison in 2016 and has since begun a Trailblazer Art in the City program, which includes 18 unique, hand-painted bison that are purchased or donated to local businesses and designed by local artists. Williams announced plans to introduce 10 more bison to the program.

READ ALSO  Do You Want Google To Stay Stagnant & Not Improve?

Since the beginning of the strategic plan, the university has seen a 25% increase in attendance to community events and has conducted a perception study involving telephone surveys and a focus group made up of Washington County and Wasatch Front residents.

“Probably what created the most press last year was intercollegiate athletics,” Williams said.

Dixie State is preparing for its jump to Division I athletics at the beginning of the 2020 fall semester. To prepare for the move, the university has a number of projects. From the already-completed Director’s Club Room revealed earlier this year to plans to construct a new softball stadium, Williams said the university is working to offer high-quality facilities to student athletes and sponsors.

Williams also addressed the higher-than-average GPAs of the institution’s student athletes, which increase from 3.15 in the fall to 3.18 last semester.

Maintaining the student-athlete GPA goal of 3.10, collecting over 2,000 hours of student-athlete community service hours, creating a regional marketing campaign to promote the university and updating branding guides are just some of the practices Dixie State hopes to continue moving forward.

At the completion of the presentation, Williams announced an exclusive, 10-year partnership between Mountain America Credit Union and Dixie State University.

The partnership is ultimately to support the university’s transition from Division II to Division I athletics in 2020.

The collaboration will result in new additions to the university’s athletic facilities, including a JumboTron in the Burns Arena and Trailblazer Stadium. In return, the university will gift the bank its own bison.

The university has reached its fifth and final year of the strategic plan, having met the goals it outlined for itself, and is moving on to a new plan this year.

Dixie State has hired a consultant and is expecting to hold a number of town hall meetings to hear from students, faculty, staff and the community about aspects of the university they would like to see evolve.

“Our success in our strategic plan has been because our community got involved in that strategic plan,” Williams said. “They’re very vocal in a good way. They tell us where we need to go and what we need to do.”

After the university gets some insight from the town hall meetings, a committee will look over the surveys, comments and workforce needs to devise a new plan.

Williams said the current strategic plan has been so successful because it was designed by and for the community to meet the needs of Southern Utah.

Averee Ryann Richardson was raised in central Ohio and graduated with her bachelor of science degree from Dixie State University in 2019. She is the former editor-in-chief of Dixie State University’s student-run news organization, the Dixie Sun News; she also served as the news organization’s news editor in past years. When she is not chasing news or networking, Averee enjoys spending time with her family and two rambunctious dogs, Malibu and Mookie.