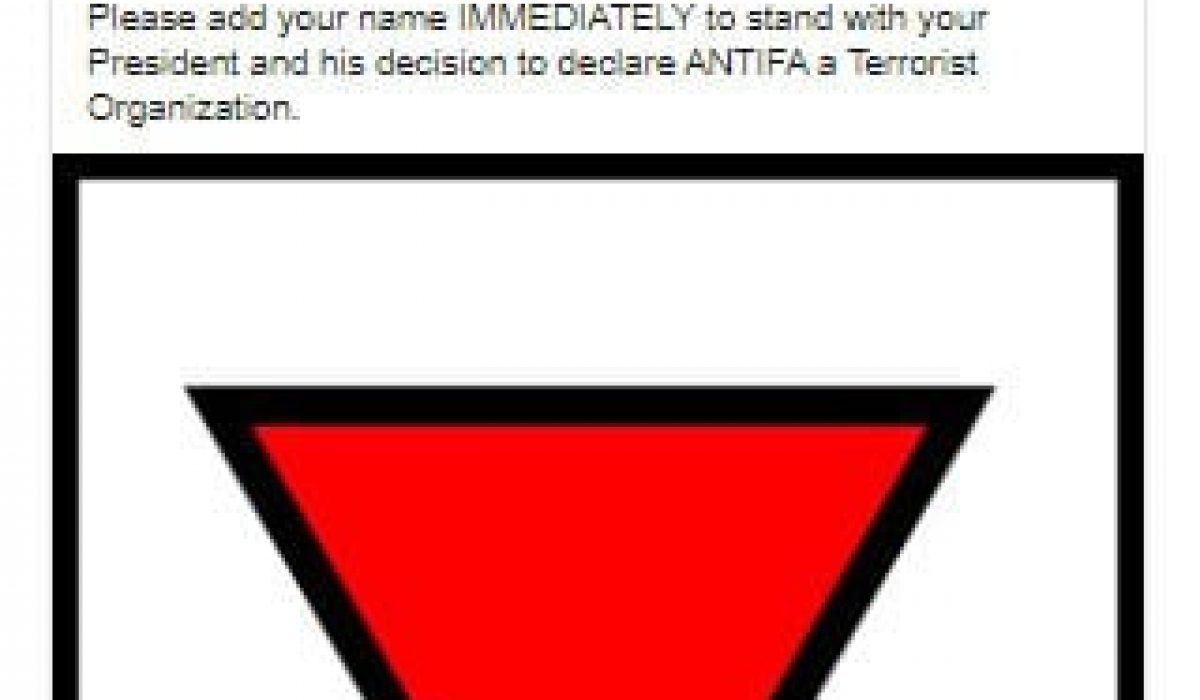 (Reuters) — Facebook said on Thursday it took down posts and ads run by the re-election campaign of U.S. President Donald Trump for violating its policy against organized hate.

The ads showed a red inverted triangle, a symbol the Nazis used to identify political prisoners, with text asking Facebook users to sign a petition against antifa, a loosely organized anti-fascist movement.

Trump and Attorney General William Barr have repeatedly singled out antifa as a major instigator of recent unrest during nationwide anti-racism protests, with little evidence.

“Our policy prohibits using a banned hate group’s symbol to identify political prisoners without the context that condemns or discusses the symbol,” said a Facebook company spokesperson.

Above: A screenshot from Facebook’s ad library shows an ad run by Republican President Donald Trump’s campaign, one of many using the same symbol that Facebook took down on Thursday for violating its policy against organized hate.

The symbol was in Facebook ads run on pages belonging to Trump and Vice President Mike Pence, as well as on ads and organic posts on the “Team Trump” page.

“Whether aware of the history or meaning, for the Trump campaign to use a symbol – one which is practically identical to that used by the Nazi regime to classify political prisoners in concentration camps – to attack his opponents is offensive and deeply troubling,” the Anti-Defamation League’s CEO, Jonathan Greenblatt, said in a statement.

“The inverted red triangle is a symbol used by Antifa, so it was included in an ad about Antifa,” Tim Murtaugh, a spokesman for the Trump campaign, said in an email.

“We would note that Facebook still has an inverted red triangle emoji in use, which looks exactly the same, so it’s curious that they would target only this ad. The image is also not included in the Anti-Defamation League’s database of symbols of hate.”

A spokesman for the ADL said its database was not one of historical Nazi symbols but of those “commonly used by modern extremists and white supremacists in the United States.”

He also said that there have been some antifa who have used the red triangle, but that it was not a particularly common symbol used by the group.

A red triangle that marked ‘political prisoners’ was the most common category of prisoners registered at the German Nazi #Auschwitz camp.

In August 1944, political prisoners constituted 95 percent of camp prisoners’. A letter inside the triangle could mark the nationality. pic.twitter.com/jBuNn0xmL1

Mark Bray, a historian at Rutgers University and the author of “Antifa: The Anti-Fascist Handbook,” said that the red triangle had been reclaimed by some leftist groups in the United Kingdom and Germany after World War Two but that he had never come across any use of it by anti-fascists in the United States.

A Reuters tally counted 88 versions of the ad using the symbol from the three Facebook pages. Ads from Trump’s page had gained at least 800,000 impressions, according to Facebook’s ad library.

Asked about the ads’ removal at a U.S. House Intelligence Committee hearing on Thursday, Facebook’s head of security policy, Nathaniel Gleicher, said the company would be consistent in taking the same actions if the symbol appeared in other places on the platform.

Facebook has previously removed Trump campaign ads, including ones that violated the company’s policy against misinformation on the government’s census.