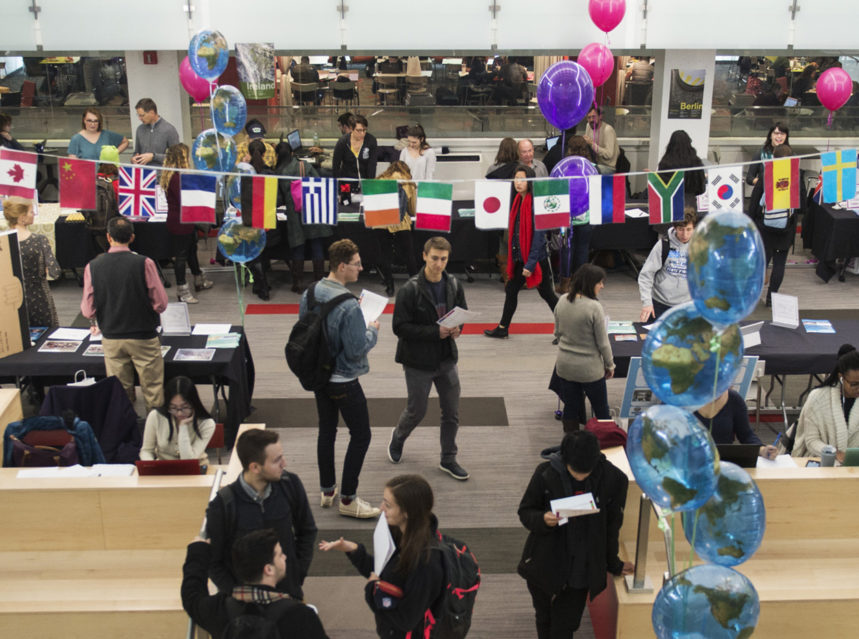 Aliza Schaffer, AMD’18, recently completed a global co-op in Seville, Spain, where she worked for the travel site Glamping Hub. As a marketing assistant, her responsibilities ranged from writing content for the company’s website to conducting search engine optimization research.

“Along with a wide array of marketing skills, this experience taught me a plethora of personal skills as well,” said Schaffer, a third-year communications major. “Having to establish a new life in a country thousands of miles away from home instilled in me a new level of independence and confidence in myself and my abilities.”

Schaffer is one of more than three-dozen Northeastern students who will showcase their out-of-country co-op experiences at the university’s Global Co-op Fair on Thursday from 5 to 8 p.m. in the Curry Student Center Indoor Quad. The students presenting at the event represent six colleges and have engaged in experiential learning opportunities in more than 30 countries around the world, including England, Germany, and Thailand.

Northeastern has placed students in experiential learning opportunities in 136 countries since 2006. Graphic by Lia Petronio.

The fair will give students the chance to ask questions of others like Schaffer who have done a global co-op, with a particular focus on how to prepare for living abroad and what happens on the ground. “Make as many connections at the fair as possible,” Schaffer advised. “Get the names and email addresses of the presenters and don’t be afraid to reach out.” She is living proof of the power of networking. “Before I accepted my position abroad,” she said, “I spent two hours getting coffee with one of the company’s previous co-ops who was beyond helpful in my decision-making process.”

More than 3,100 students participated in a global learning experience during the 2016-17 academic year, including all of the fair’s presenters. Jared Ranahan, DMSB’19, will showcase his recent experience as a program and partnerships co-op for Ashoka, a Singapore-based nonprofit that promotes social entrepreneurship and the changemakers behind some of the world’s most innovative ideas.

The co-op shaped his career outlook, he said, shedding light on the ins and outs of social enterprises. “I was able to gain insight into the field of social finance and learn how to apply my passion for finance through a lens of social impact,” said Ranahan, a third-year business major with a concentration in finance. “I’ve always been interested in working in the social sector, but I had very little idea of how it operated and what constituted a successful social enterprise until this co-op.”

“Make as many connections at the fair as possible. Get the names and email addresses of the presenters and don’t be afraid to reach out.”

He offered up three tips to students looking to work on co-op in another country: bone up on the nation you’ll be living in; make friends with locals; and travel whenever you get the chance. “Create dialogues with those around you,” he said. “One of my favorite parts of being abroad was meeting people from outside the U.S. and getting to understand how they live their lives. We had so many great conversations about daily life, entertainment, cultural differences, food, and politics.”

Schaffer echoed Ranahan, calling on students to embrace their new home away from home. “Don’t think of yourself as a student working abroad. Think of yourself as a real resident of your new city,” she said. “If you’re open to new experiences, you’ll get much more out of your time abroad.”

Siena Tice, S’18, attended last fall’s fair, where she discovered the opportunity to work as a nurse’s assistant at a retirement home in Malta. From January to April, Tice provided care to 100 residents, dressing them, taking their vital signs, and organizing their medications.

“Create dialogues with those around you. One of my favorite parts of being abroad was meeting people from outside the U.S. and getting to understand how they live their lives.”

The experience introduced her to the stark differences between the healthcare systems in Malta and the U.S., particularly in regard to patient confidentiality laws. “It taught me how advanced the American healthcare system is and how many important rules and regulations we have in place,” said Tice, a third-year nursing major who will showcase her global co-op experience on Thursday night.

She advised students to leave their comfort zone and dive headfirst into new cultures in far-flung countries. “Try to learn as much as you can about your surrounding culture,” she said. “It is amazing what you will discover about these places and about yourself.”