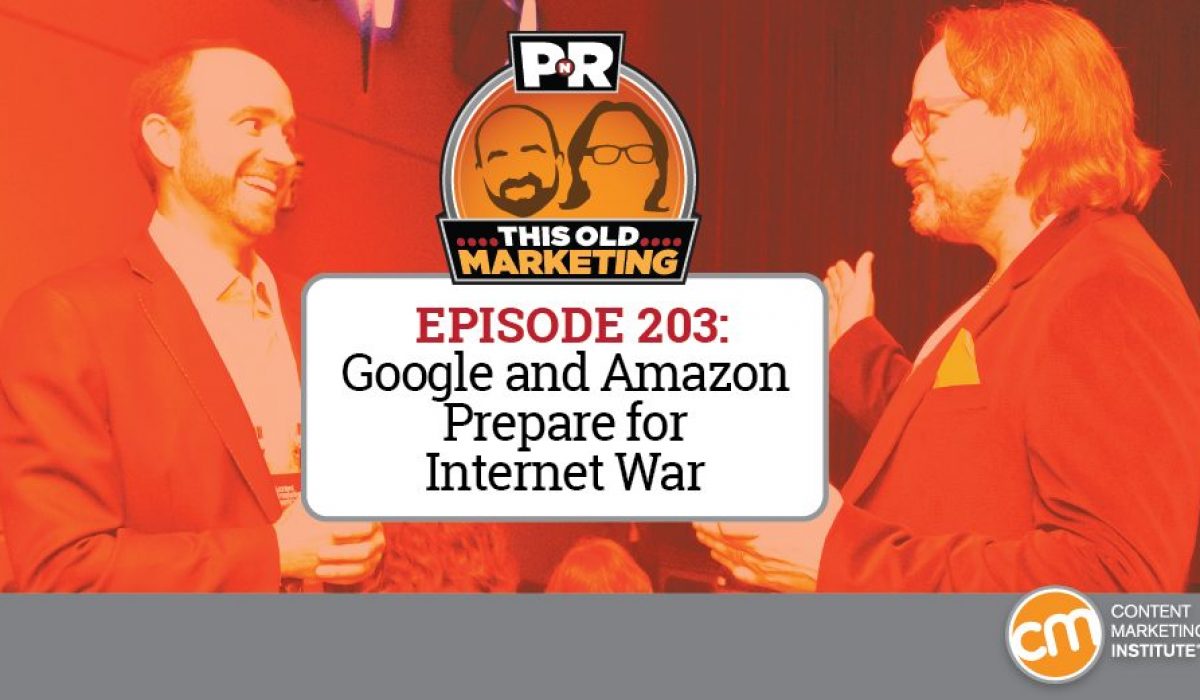 PNR: This Old Marketing with Joe Pulizzi and Robert Rose can be found on both iTunes and Stitcher. If you enjoy our show, we would love it if you would rate it or post a review on iTunes.

In this week’s episode

This week, Robert ponders the nature of our personal power – and how we should choose to wield it. In the news, we discuss the week that was Advertising Week. Google and Amazon begin the war to end all wars, while Twitter is wasting everyone’s time by going to 280 characters. Our rants and raves include Time’s new membership model and Nielsen ratings; then we wrap up with an example of the week on the Chagrin Falls Film Festival. Ahrefs is a powerful SEO tool set that has many amazing tools for content marketers who’re looking to grow their traffic from Google. With Ahrefs tools you can easily find out what people are searching for in Google, so you can create content around the most popular search queries. You can also discover content that got the most shares or earned the most backlinks, so you can piggyback from it and get the same results. And finally, you can easily research your competitors and find out which content brings them the most traffic from Google.

Here’s an exclusive opportunity for PNR podcast listeners: Any listener who tweets using #ThisOldMarketing between the dates of September 30 through October 28 will be entered into a drawing to win an annual Ahrefs account plus a signed copy of Joe and Robert’s new book, Killing Marketing. One randomly selected participant will be drawn each week; four winners in total. Today’s buying committees are diverse; Millennials are already taking their seats among Generation X and Baby Boomers at the buying table, making navigating the already complicated buying environment even harder, thanks to their different preferences. Though this shift might seem minor, it greatly impacts how marketing teams operate, sales teams engage, and how purchase decisions are ultimately made.

SnapApp and Heinz Marketing recently conducted research to answer the question: How do different generations like to buy? Their report, The Millennials Are Here! How Generational Differences Impact B2B Buying Committees Today, looks at the differences between the rising Millennial buyer, their Generation X and Baby Boomer counterparts, and how B2B marketing and sales strategies can address the gaps between them. Read the report. This Old Marketing example of the week

(58:46): Chagrin Falls Film Festival: This week, I wanted to share a homegrown story of how a woman turned her small town into a magnet for movie fans and filmmakers around the world. Chagrin Falls Film Festival founder Mary Ann Ponce wanted to do something to draw visitors to her small town in the Cleveland area. According to a profile article on Cleveland.com, Ponce became inspired by the filmmaking experiences of her son – who had been a film student, before he passed away from leukemia – to build a festival around sharing the small, passion-driven stories that other festivals overlooked. The annual event first launched 8 years ago with an attendance rate of 1,800 viewers; but thanks to Ponce’s drive – and a supportive community of over 200 local volunteers – last year’s festival attracted over 10,000 people. In Ponce’s words, the festival is all about taking something positive and turning it into something bigger – a concept embodied by one of the films being featured this year: Knife Skills tells the story of a Shaker Square eatery that has earned national acclaim for its food and its staff, which consists almost entirely of men and women just out of prison. It’s a wonderful This Old Marketing example of how to build a live event from meaningful stories. For a full list of PNR archives, go to the main This Old Marketing page.