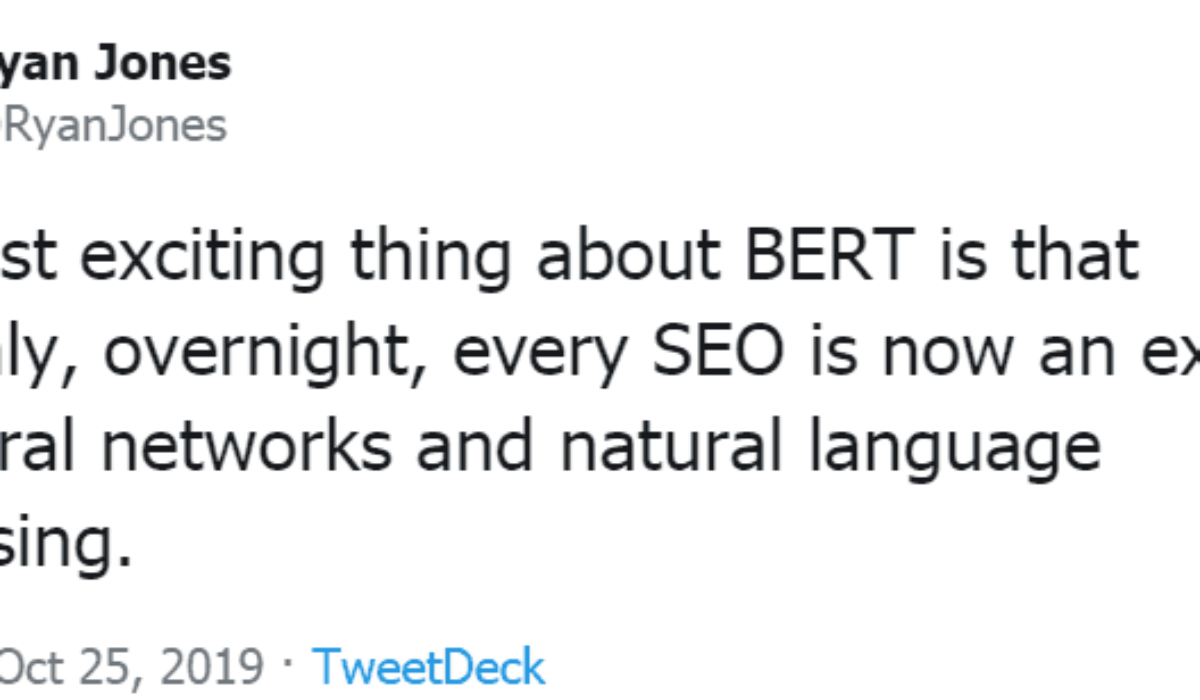 “the most exciting thing about BERT is that suddenly, overnight, every SEO is now an expert on neural networks and natural language processing.”

“I expect the definitive guide to BERT should be rolling out at any second now, filled with more mythology than any article should be, by someone claiming to be an expert in BERT optimization. Be careful what you believe.” Will King (@kingwill829) tweeted:
“Looking forward to the influx of ‘How to rank for BERT keywords’ SEO blog posts”

Google’s Danny Sullivan responded to questions and affirmed that BERT does not change anything on the publisher side.

This is what Danny Sullivan tweeted:

“There’s nothing to optimize for with BERT, nor anything for anyone to be rethinking. The fundamentals of us seeking to reward great content remain unchanged.” I came across one article that claimed BERT and E-A-T (Expertise, Authority, and Trustworthiness) had something to do with each other.

I won’t link to the article but I did show it to search algorithm expert Dawn Anderson (@dawnieando).

This is what we discussed:

Dawn, I just stumbled on an article that connects BERT to E-A-T, which seemed to be incorrect. Here’s the link.

There are hundreds (thousands) of algorithms layered together in search.

BERT and E-A-T are completely separate, but everything works together anyway. BERT is simply a language model…

E-A-T is not an algorithm in itself, but a guideline for Quality Raters to determine in results evaluation exercises.

Of course, the E-A-T factors seen as indicators of quality are something brands should seek to strive for in any event.

The main problem seems to be that people think these algorithms… are all very separate when in the real world they all work together. There could literally be thousands of layers working together as part of a learning to rank process.

But in none of the BERT papers out there (regardless of whether it’s Google BERT or RoBERTa from Facebook, etc), have I come across any kind of reputation / trust judgement, since they are all about natural language understanding and disambiguation tasks”

There is a great deal of confusion and link baiting surrounding BERT. The situation might even be worse than many had predicted.

Here are a few examples to watch out for.

It’s not that your site has to be long tail search friendly. BERT is about Google understanding what user’s mean and THEN being able to connect that to more specific information that already exists on your website.

There are some who are advancing the idea that this algorithm is not particularly significant. Yet Google is on record stating that this update affects one out of ten English language search queries in the United States of America. Ten percent is a significant amount of search queries.

The Google announcement used as examples search queries that have their context influenced by the words “to” and “from.” Some SEO articles claimed that this means stop words are more important now.

People are taking that seriously. I saw one SEO bragging he always includes stop words in his article URLs.

4. BERT is the Biggest Update of All Time

It’s been reported in many articles that BERT is one of the biggest updates of all time. That statement is based on a misinterpretation of a press release issued by Google.

This is what the press release stated:

According to the press release, BERT represents one of the biggest improvements in five years, not of all time.

Other candidates in this class of updates could include statistical analysis, the Hummingbird update, Caffeine update and the Panda and Penguin updates. Those were all major updates, as is BERT.

There is a significant amount of exaggeration and misinformation surrounding BERT. However there is a lively discussion ongoing to keep the exaggerations in check.

This gives me hope that search marketing will keep focused on quality information.