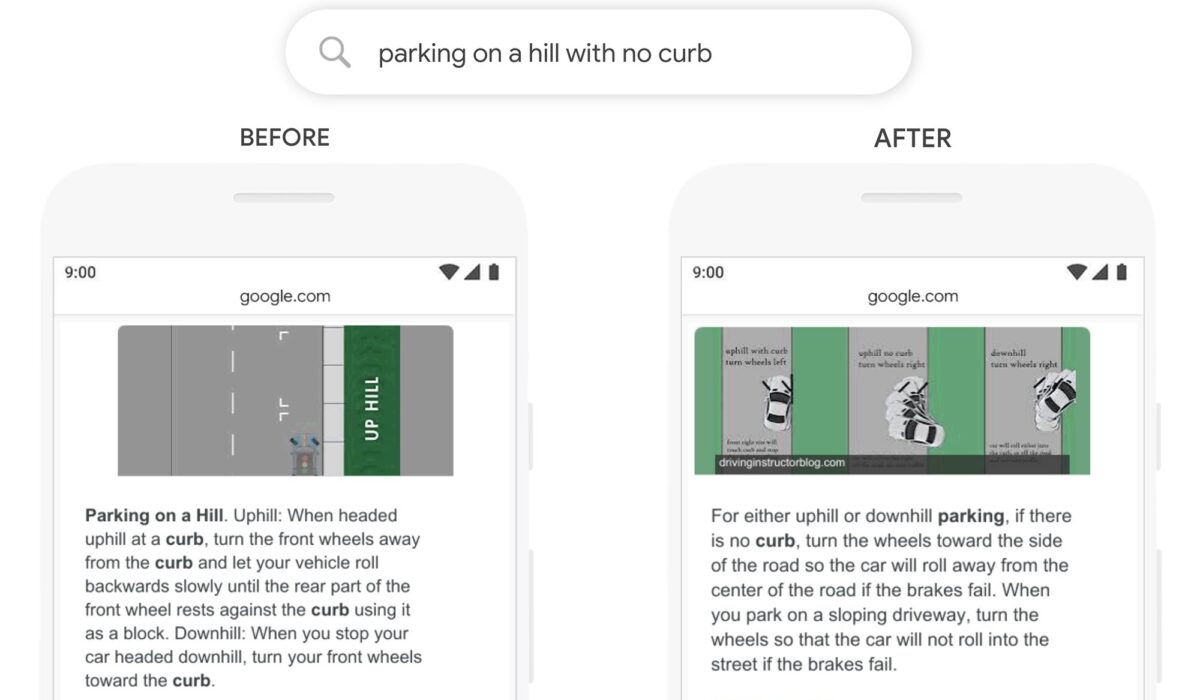 Targeting featured snippets is not a new SEO strategy.

But Google has unveiled a handful of new updates to featured snippets in the past couple of years, which affect which content is selected and how the snippets appear in the search results.

BERT, Google’s “neural network-based technique for natural language processing (NLP) pre-training called Bidirectional Encoder Representations from Transformers,” has been rolled out for both rankings and featured snippets in 70 languages, as of December 9, 2019.

BERT allows Google to better understand complex queries, such as in the example Google provided below, in which Featured Snippet content changed to better answer the query as a result of BERT. Featured snippets offering “bubble refinements,” also known as carousel snippets, launched in 2018, but continue to be displayed for approximately 8.62% of queries which produce a featured snippet result, according to data provided by Moz BI analyst, Eric Hedekar.

Carousel snippets offer users the ability to refine their search based on commonly searched modifiers associated with their original query.

These modifiers often take the form of competitor names, locations, or product attributes, and allow various URLs to own the Featured Snippet simultaneously.

3. Right Sidebar Featured Snippets Are on Their Way Out

One relatively new development is featured snippets that are displayed in the right sidebar of search results on desktop, which took on a similar look as Knowledge Panels.

However, as part of the January 2020 featured snippet de-duplication update (see below), Google announced that it would soon be folding right sidebar Featured Snippets into the main panel of search results.

TargetText is a new development for Google Chrome, in which a selected fragment of text on the page is highlighted with a yellow background.

In late August of 2019, Glenn Gabe originally discovered that Google’s TargetText functionality was being applied to Featured Snippets.

Brodie Clark then did further research that indicated that this feature works even for content hidden behind tabs. (Sidenote: Thanks to Izzi Smith, who recently presented about Featured Snippets to a Google Webmaster Conference, for providing insights on some of the above developments. Follow Izzi on Twitter for the latest updates with Featured Snippets.)

Capturing featured snippets has been a goal of SEO professionals for years, given their tremendous potential for organic traffic and visibility.

According to Moz, 24% of search results display a featured snippet, but recent developments have added new considerations to the value of earning these types of results.

Prior to January 23, 2020, ranking for featured snippets provided the benefit of ranking in two places organically:

However, on that date, Google began de-duplicating these results, meaning that a URL would either appear as the Featured Snippet or in the organic results, but not both, for a given query.

For some search marketers, this update has called into question whether earning featured snippets is still a good strategy, compared to earning the traditional organic #1 result.

Depending on the query, the intent, and the content contained within the snippet, featured snippets may produce a zero-click outcome, or the click-through-rate may be significantly higher for the regular blue links.

As a result of this, not being able to rank in both places could result in potential traffic declines. A 2018 study by Ahrefs indicates that when a featured snippet appears, only 8.6% of clicks go to that result, but combined with the 19.6% click-through-rate from that comes from also ranking in position 1, previously created enormous benefits for earning featured snippets.

Without the second listing, the click-through-rate from only appearing in the featured snippet may not justify appearing there, compared to the other organic results.

However, initial data from SEOClarity found that there was no significant change in traffic to featured snippet URLs as an immediate result of this update.

Ultimately, the decision whether or not to target featured snippets should be made on a case-by-case basis depending on what your keyword ranking, CTR, click, impression, and conversion data tell you.

Unfortunately, Google currently doesn’t offer the ability to filter by featured snippets within Google Search Console, and they are not noted differently in Google Analytics either, which adds some challenges to this task of analyzing their performance.

Are Featured Snippets Being Affected by E-A-T Considerations?

Given Google’s recent fight against disinformation online and the increasing importance of E-A-T within the organic search results, it’s interesting to note whether featured snippets have seen any changes as a result of these initiatives.

Firstly, featured snippets have always had a set of unique requirements that govern which text is eligible to appear in the snippet.

Featured Snippets must not be:

Based on the above criteria, featured snippets can either be removed by Google and/or reported by searchers for violating their policies.

Based on the extra scrutiny applied to featured snippets, my SEO team at Path Interactive thought it would be interesting to dig into a variety of featured snippets results, particularly for “Your Money Your Life” (YMYL) queries, to see what we could learn about the nature of featured snippet content as it relates to content quality and E-A-T.

Firstly, we wanted to see if featured snippets were triggered for highly controversial topics, and how this compares to Bing, which rolled out a feature to handle controversial queries, called multi-perspective answers.

Bing’s intention with this feature is to show both sides of the story for topics that don’t have a single right answer.

An example of Bing’s use of multi-perspective answers can be seen below, for the query “is cholesterol good:” For the same query, Google only shows one perspective (see the below image).

And, compared to Bing’s result, Google’s snippet seems to leave out an important piece of information that could help the searcher gain a deeper understanding of why cholesterol can be both good and bad at the same time. For even more controversial queries, here is what we found:

Query: Did the Holocaust happen?

Query: Is the earth flat?

Query: Are immigrants stealing our jobs?

In the case of highly controversial searches, it appears that Google is simply choosing not to display a featured snippet for many queries.

Bing, on the other hand, is more likely to display a featured snippet that takes on one side of the argument.

Interestingly, for the above examples of controversial queries, Bing’s multi-perspective answers were never displayed.

Analyzing the Readability of Featured Snippet Content for YMYL Queries

Next, we took 419 YMYL queries which generate a featured snippet, extracted the content from those snippets, and used Readable.io to analyze their readability and some other features of the snippet content, as well as the content on the pages from which they were extracted.

Some examples of keywords we analyzed:

By extracting just the Featured Snippet text from these 419 queries and analyzing their readability, we found the following results:

Readability Score Distribution (A is highly readable, E is unreadable):

Analyzing the full page content for URLs which own the Featured Snippets for these 419 YMYL queries, we found the following results:

Readability Score Distribution (A is highly readable, E is unreadable):

Takeaways From Our Analysis

With 78% of YMYL featured snippet results earning readability scores of B-E, and an average Flesh-Kinkaid reading level of 10, it appears this featured snippet content is slightly more advanced and difficult to read than the full pages from which they are extracted.

Thirteen percent of the featured snippet content we analyzed earned a sentiment score of “negative,” and 23% received a score of “neutral.

These scores significantly differ from the analysis of the full page content, which was almost entirely scored as “positive.”

This may be due to the nature of the featured snippet content itself: much of it offers direct advice about stressful medical or financial topics, such as checking symptoms or seeking help with debt relief.

The content on the pages Google is selecting to display featured snippet for YMYL queries tends to be longer (1,600+ words), readable by a large audience, positive in its sentiment, and formal in its tone.

This makes sense, given that featured snippets are generally pulled from pages that already rank on the first page of Google, which usually exhibit good readability characteristics, and often use a longer word count to sufficiently cover YMYL topics.