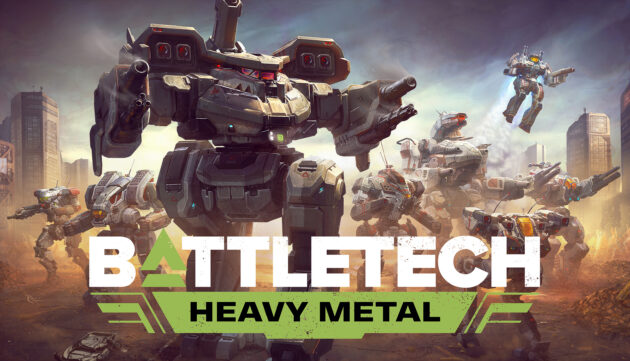 Seattle’s Harebrained Schemes announced that Heavy Metal, the third downloadable content pack for its 2018 strategy game BattleTech, is coming out Nov. 21. The expansion made its public debut Saturday at the annual PDXCON in Berlin, a convention intended to celebrate the fan community of Harebrained’s parent company, Paradox Interactive.

Heavy Metal – that title’s a little on the nose for a game about giant robots fighting each other, but we can roll with it – features the arrival of the first all-new BattleMech, an original design that was designed exclusively for this expansion. It comes alongside seven as-yet-unnamed collectible ‘Mechs from the original 1984 BattleTech board game, each of which comes with unique equipment, and eight brand-new weapon systems. This includes the first area-of-effect attack in BattleTech, the ‘Mech Mortar.

A mini-campaign will ship with Heavy Metal, designed as a “flashpoint,” which only becomes available after you clear all of the main game’s story missions. The new battles pit your BattleMech mercenary company against two members of Wolf’s Dragoons, the Bounty Hunter and the Black Widow, in a fight over the contents of a strange derelict cargo ship.

Heavy Metal will retail for $19.99, and is included in BattleTech’s Season Pass. It arrives almost six months after the previous expansion, Urban Warfare.

Harebrained Schemes was founded in 2011 by Jordan Weisman and Mitch Gitelman, who previously worked together at FASA on the Crimson Skies franchise. It made a name for itself making several computer role-playing games with the help of crowdfunding, including three games based on the Shadowrun franchise, which Weisman co-created in 1989.

READ ALSO  How to Turn on Two-Factor Authentication for Twitter

Following the sales success of 2018’s BattleTech, Harebrained was acquired in June of that year by Stockholm-based Paradox Interactive. Harebrained continues to operate as a division of Paradox under its previous management.

Weisman has had a long and decorated career in the tabletop gaming industry, as a founder of the FASA Corporation. He also helped create the long-running MechWarrior and Earthdawn franchises.

Paradox Interactive, headquartered in Stockholm, is celebrating its 20th anniversary this year. It publishes and develops a variety of “grand strategy” games for the PC market, including Stellaris, Crusader Kings, and Cities: Skylines. Paradox is also a minority shareholder in Seattle’s Hardsuit Labs, the developers of next year’s Vampire: The Masquerade – Bloodlines II.

Paradox also recently announced its newest game, Surviving the Aftermath, a city-builder that challenges the player to build a successful colony following a catastrophic nuclear war.