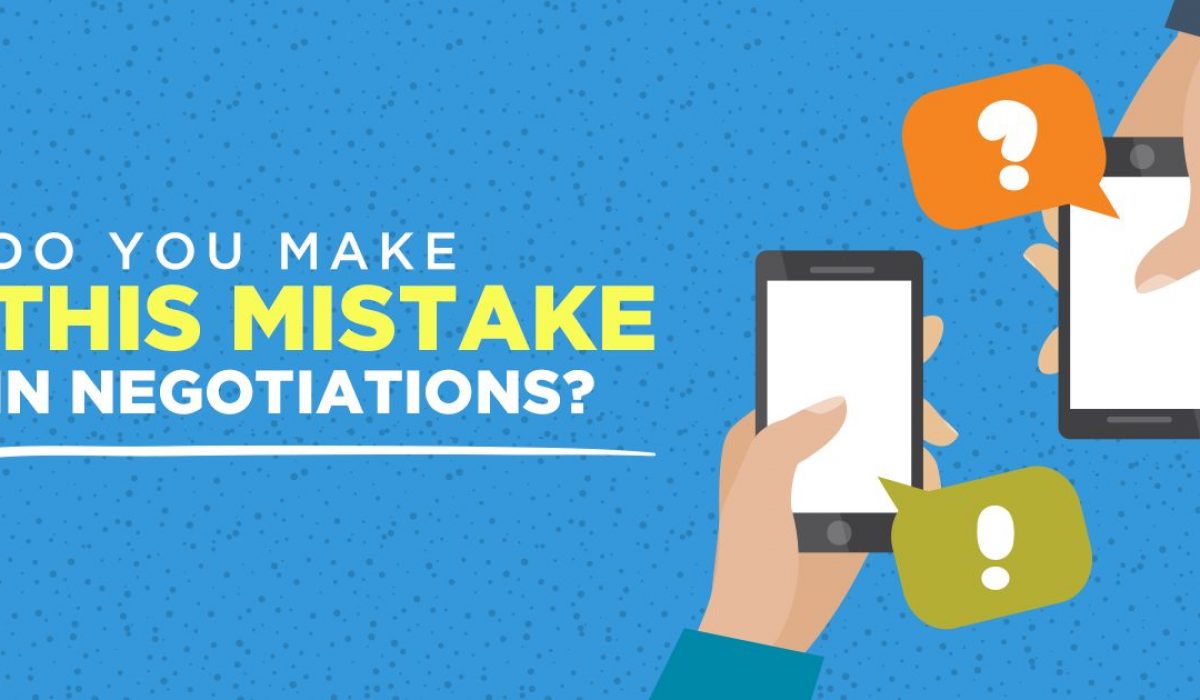 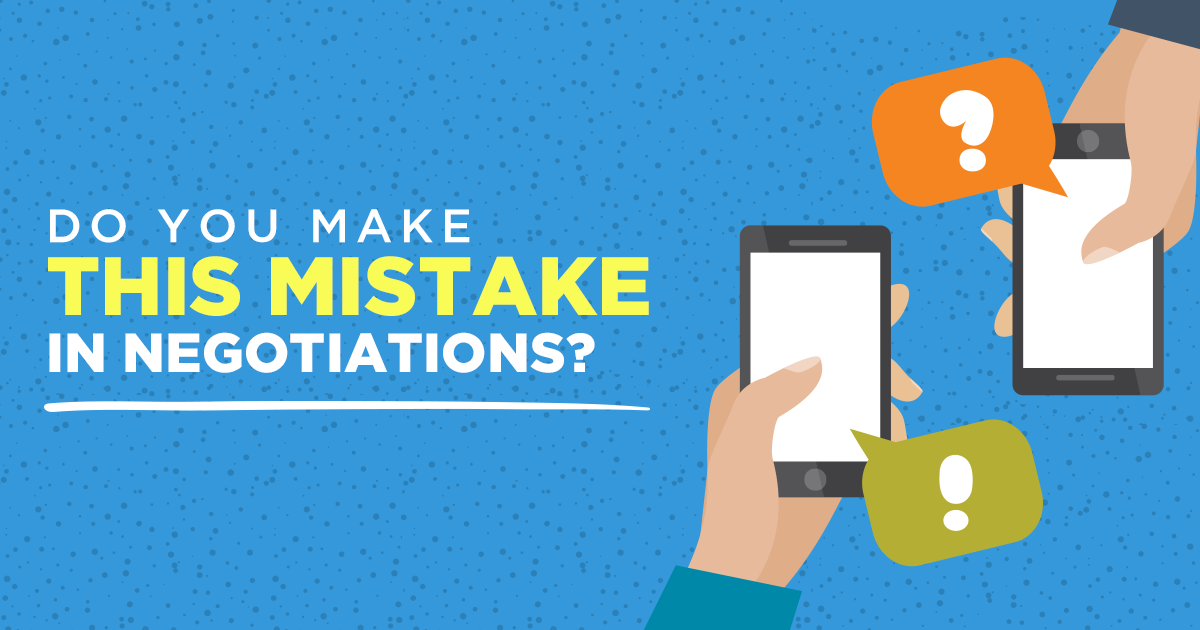 So, I remember when I tried to sell someone one of my older, high quality domain names. At the start of the negotiation process, we were at a standoff…

Should I make the first offer? Or should he?

We traded several emails. None of us crossed the line. He wouldn’t tell me what he wanted to pay and I wouldn’t tell him my price.

Me: “So, what range are you looking at?”

Him: “I’m not even sure where to begin here. I wouldn’t want to offer something that would be insulting.”

Me: “I appreciate that. This is a great domain name. I’ve had a few offers in the past, and I held on to it. I’m not even sure if I want to let it go…”

Him: “I like the domain too. I’m looking at a few domains actually, and this is just one of them. But I’m happy we’re talking. Because I do want to resolve this soon…”

This negotiation standoff is all too common.

There’s a common misconception in sales where people believe, “The first person to make an offer loses.”

This advice used to be true.

But now? They’re just one Google search away. I even filmed a video about how to negotiate.

And that’s why I believe you should almost always rush to make the first offer… whether you’re buying or selling.

It’s all about the cognitive bias known as “anchoring.” Let me explain with an example about soup. Soup? Yes…

A study published in the Journal of Marketing Research, tested the effect of limiting the number of cans of soup customers could buy. You might have seen similar offers at the grocery store… 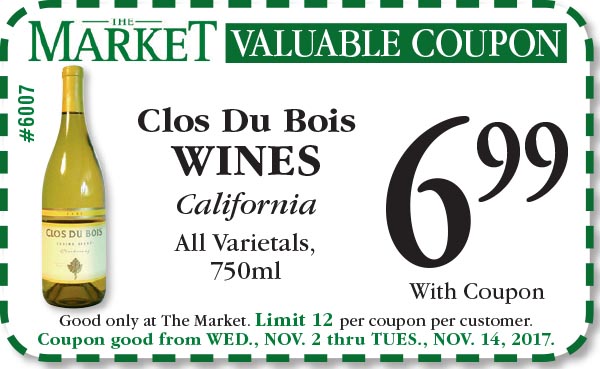 Is it because the store really doesn’t want you to buy more? Seems unlikely…

(Although, yes, grocery stores will do this with a “loss leader” to get you through the door, too. But that’s a different topic.)

Well, in this study, there was a “Limit of 12 per person” for cans of soup.

Without the limit, people bought an average of 3.3 cans. But once the limit of 12 cans per person was introduced…

People bought an average of 7 cans!

People see the number 12 and it becomes their “anchor.” So now, when they decide how many cans to buy, they adjust based on that number.

This is anchoring in full effect. It means that we as humans, tend to rely too much on the first piece of information we get. Like the number 12, in the soup example.

This anchoring effect is the reason why it’s often a good idea to make the first offer in a negotiation.

By setting a favorable anchor, you can sway the outcome of the negotiation. That’s why making the first offer is often the best strategy.

Adam D. Galinsky, who studies how particular strategies affect outcomes in negotiations at Northwestern University’s Kellogg Graduate School of Management, points out that there are a few things to keep in mind:

For one, when you do lead in a negotiation, it’s important you make an AGGRESSIVE first offer.

Otherwise, there’s no point. If your first offer is the same as your “reservation price” – meaning, the minimum you’d be willing to accept – you’ll end up with either a bad deal or no deal at all.

That’s why Galinsky suggests you set your anchor based on your TARGET price. That is, an outcome that you’d be 100% happy with.

So, when you set an anchor, don’t set it at the minimum you’re willing to accept. Set it at a level where you’d be THRILLED to make a deal.

That’s how you’ll end up with a better deal. Plus, it allows you to make concessions… Which is crucial to make any deal happen. And it will make the other party feel better about reaching an agreement, too.

Now, while you should be aggressive, you shouldn’t be ABSURDLY aggressive. If your counterpart thinks there’s NO chance of reaching an agreement, they’ll just walk away. So, if you have very little information about your counterpart’s reservation price, making the first offer can be tricky.

Also, if you you know NOTHING about the product or service at stake, you run the risk of making a first offer that’s too LOW. That would be… well, kind of dumb.

So, if you use this “first offer” strategy, make sure you’re at least in the right ballpark.

With that said, I recently noticed something strange:

People tend to make their first offer a round number.

For example, let’s say you want to sell your service. You meet with a potential new client. You’re smart and use the first offer strategy. So, you go ahead and give them a price quote. To keep it simple, you might say, “I’ll do everything you want me to do for $1,000.”

But new research from Columbia University shows that it’s actually a mistake.

Especially if you want to take full advantage of the anchoring effect. Which is the whole point of making the first offer.

The study, published in the Journal of Experimental Psychology, found that when you make a PRECISE first offer, you get a LESS AGGRESSIVE counter offer. Leading to a more favorable final outcome for you.

The anchor you set with a PRECISE number is MORE effective than when you use a round number.

(I filmed a video about 3 ways to instantly boost credibility. You may want to watch this too).

Well, the study also found a possible explanation for this effect:

When you make a precise offer, it shows that you’re not just pulling a number out of thin air! A precise number looks more informed. It implies you actually know what you’re talking about.

A “precise” first offer looks more like the real indicator of value. The result? You’re less likely to face an aggressive counter-offer!

So, next time you make a “first offer” don’t use a round number to “keep it simple.” It might seem like you came up with a number out of thin air… and people are going to try to haggle.

Instead, make an aggressive and PRECISE first offer. That’s how you’ll take FULL advantage of the anchoring effect in negotiations.

Now back to the domain name…

I ended up not selling it.

What I ended up discovering was something as simple as this:

The guy knew I owned the domain name and he wanted to rip me off.

Have you ever been in a negotiation where you made the first offer and successfully anchored a high value? Or has it ever backfired?

I want to hear your negotiation story!