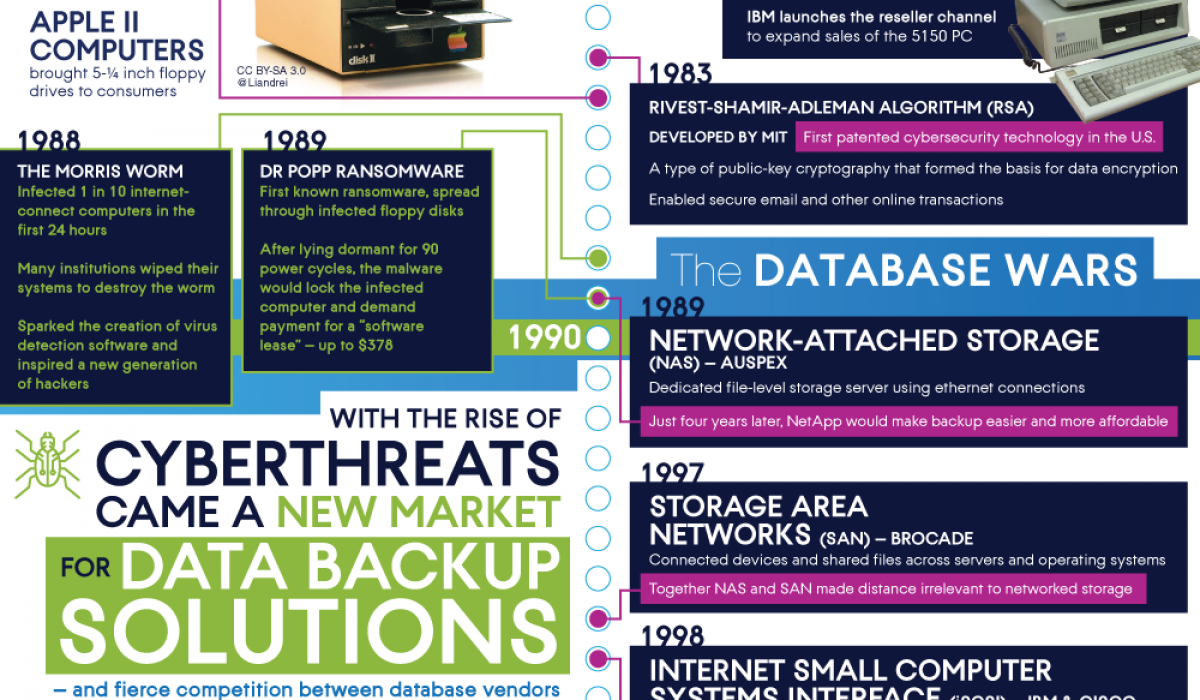 Storing just 3.75 megabytes, yes megabytes, took a hard drive that weighed over a ton and was 16 feet tall. Today you can hold terabytes of data in the palm of your hands, which makes them extremely vulnerable to theft or just losing them.

History of Backup and Storage

A new infographic from Acronis developed by NowSourcing titled, “Backup And Storage Through The Ages” looks at the concerns about backup, security, and privacy as the amount of data being generated continues to grow.

Backing Up Your Data

As businesses increase their digital presence with everything from payment system to websites, the protection of the data has to be paramount. Losing this data or worse, having it fall into the wrong hands could also mean the end of your business.

According to the Better Business Bureau, the average annual cost of cybercrime to small businesses is $79,841.

One of the best ways to protect your data is with a hybrid local and cloud backup. Additionally, you have to deploy a cybersecurity solution with a combination of antivirus, firewall, spam filter, data encryption and password management.

All of this effort requires strong governance to ensure everyone in your company adheres to measures you have put in place.

The Growth of Data Storage and Cybercrime

Even though the 3.75 megabyte of data of that behemoth was small, the magnetic disk drive IBM invented allowed random data access. Eventually the technology made it possible for smaller floppy disks measuring eight inches and storing 80KB of data in 1971.

Coincidentally, the first computer virus called “Creeper” was also created in 1971. The virus was an experiment and not for malicious use. However, it ushered in a new era in digital security.

By 1978, backup and disaster recovery solutions came into the market. More than cybersecurity, the fear was power outages. But a decade later the Morris worm had infected 1 in 10 internet-connected computers in 24 hours. The solution to get rid of the virus by organizations was to wipe their systems clean.

This incident was responsible for introducing virus detection software along with a new generation of hackers. And it didn’t take long for the first known ransomware to demand money. In 1989, Dr. Popp spread through infected floppy disks. After 90 days, the malware locked the infected computer and demanded a payment of up to $378. This led companies to start backing up their data for security reasons.

By 1990 database vendors were offering data backup solutions. As more companies came online, protecting their data was becoming a priority. With its Amazon Web Services (AWS) platform and pay per use pricing, in 2006 Amazon came up with cloud storage.

Amazon was taking over a segment no one was addressing., and by the time Google, Microsoft and others came around, Amazon controlled the majority of the market.

By 2010 ransomware was now part of the global digital threat landscape as were other cyber threats, and companies started to spend a considerable amount on IT security.

According to Acronis, by 2025 the amount of data stored worldwide will reach 175 Zettabytes. And most of this information is going to be in cloud-based data centers.

With Artificial Intelligence (AI) and machine learning increasing the value of all data, protecting this information is going to be more important. This means having integrated security will become even more essential.

No matter how small your business is, you have to take the protection of your data seriously. The reputation of your company is riding on it. And If people can’t trust you with their data, they will find someone they can.

Take a look at how far we’ve come over the history of backup and storage in the infographic below.