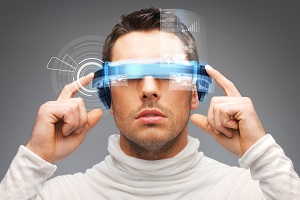 Every so often, new and shiny marketing objects come along and become the subject of a great deal of hype about how they will change the world. The phenomenon is so typical, that Gartner developed a methodology to represent where each new promising technology is in the “hype cycle.”

Of course, some new technologies don’t deliver, and yet others prove to be transformational. Usually, however, changing the world takes longer than initially thought.

Marketers are now talking (again) about how augmented reality (AR) and virtual reality (VR) will change marketing, so it’s timely to take a step back and put a practical spin on what is likely to happen and what is simply hype.

AR is the superimposition of digital data and “objects” into a real-time camera view of a live environment. This technology has been around for a long time, but has only recently begun to be significantly applied to marketing.

There are two basic versions of this technology: Overlay AR and 3D AR.

In the Overlay AR environment, the digital data or objects are not linked to the scale or specific layout of the physical world. The digital object is simply triggered by some event or data (such as a GPS coordinate.) A good example is the Pokémon Go app from Niantic Inc.; users can search for imaginary Pokémon characters, and when they “find” them the character appears superimposed on the video stream from their smartphone camera.

3D AR is an innovation of Kaon Interactive (my company). A digital 3D product model is placed into the camera view of the physical space, with some key characteristics:

With VR, users put on a headset or goggles, and they are “placed” into a digital/virtual representation of a physical environment so that they can look and explore it as they would in the real world, as if they were in that environment. When they move their head, they see the space as if they had looked in that direction in the real world. This effect is known as “immersion.”

VR usually uses a headset either with a built-in vision system and dedicated computer or a headpiece that simply encapsulates the user’s smartphone to use as the display and computer system. Examples include Google Cardboard, which allows users to use their own smartphones in a headset experience, and Oculus Rift, which is a high-definition headset that connects to an external computer.

In many VR games, in which the user can “drive” a car or “fire” a weapon, the application reacts appropriately to that user’s action in an interactive manner, giving the player a sense of presence and action.

Another application type, the 360-degree video, is often confused with AR or VR. However, 360 video is a video of an actual (real life) scene that is taken with multiple cameras/lenses pointed in every direction at the same time. The effect is to give the viewer the option to “turn” in any direction and see the action unfold from that perspective, in real-time. (Here is an example.)

The user can pan across the video using the mouse (or touching the screen on a tablet or phone) while the action continues. There is usually no interactivity in this kind of video, other than the user’s changing the viewing perspective. The storyline follows the same linear path, but can be experienced differently, depending on which direction the viewer chooses to view at any point in time.

These 360 video experiences can be viewed within an immersive headset (just like VR), on a screen (e.g., on YouTube or Facebook), or in a specially designed room with large screens all around.

These new platforms allow for innovative ways to engage customers in an experiential manner. As with all new solutions, the key to being successful is to marry the content of the experience with the appropriate technical approach.

Showing something in VR for the sake of the VR experience has no inherent marketing value to the customer, other than the “cool factor.” (In this example, consumer advertisers have been experimenting with overlay AR apps for alcoholic beverages as a way to increase loyalty and engagement with customers. This approach has the “cool factor,” but the videos aren’t inherently tied to the code on the bottle and could just as easily have been viewed without the AR trigger.) After the cool-factor effect wears off, however, the company will likely not continue to achieve the intended marketing objective.

When it makes sense to overlay marketing information on a real-world scene (say, for example, showing a unique internal product feature that can’t be seen from the outside), then there is a memorable and meaningful association of the technology to the marketing message. Customers appreciate these kinds of experiences because they have both the emotional connection and the benefit of learning something relevant and useful.

For complex products and solutions, showing something in a digital immersive environment can be highly effective because the experience is difficult to deliver with real-world products or environments, and the customer is using the immersive platform to learn about the relevant value of the product or solution.

When deciding on how to use VR and AR in the marketing mix, think about what is a practical application given the customer’s environment, and how the three key elements of engagement (sensory, intellectual, and emotional connections) will be used to deliver an effective marketing experience.

A couple of examples can illustrate the innovative impact of AR and VR in marketing:

Immersive AR and VR applications have the potential to change the connection between customers and companies because of the opportunity to deliver the most engaging, personalized, and useful experiences.

Judicious selection of the appropriate tools and venues will provide innovative marketers with effective and valuable solutions.