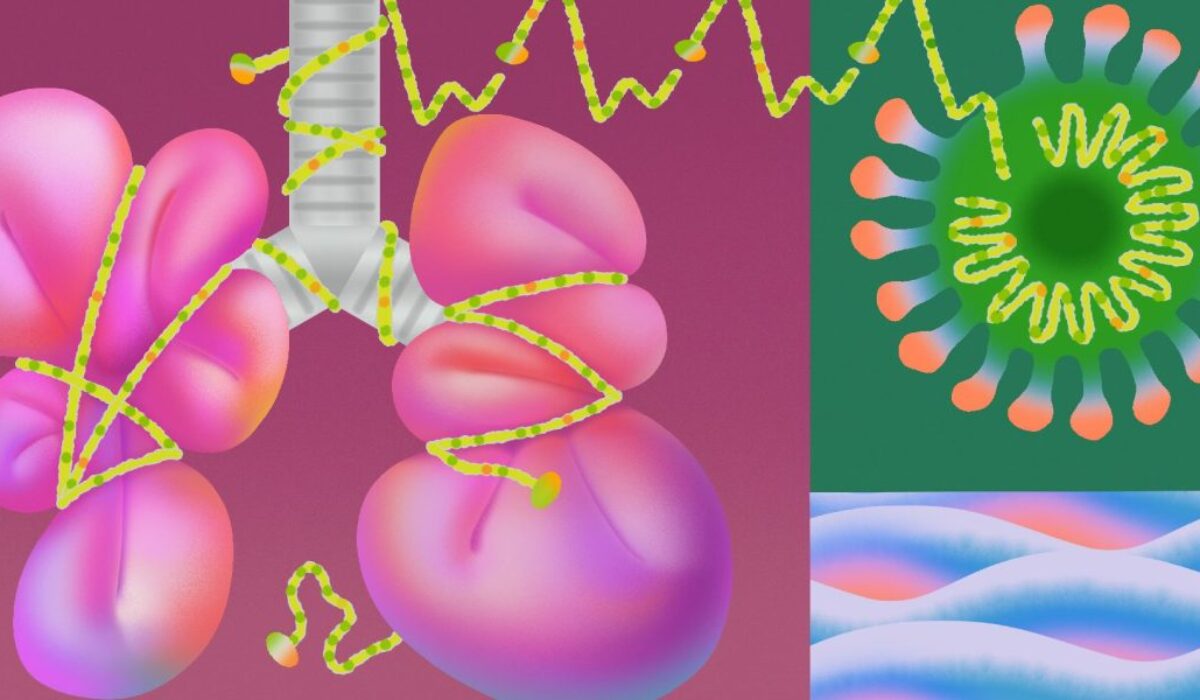 The virus’s protein spikes attach to a protein on the surface of cells, called ACE2. Normally, ACE2 plays a role in regulating blood pressure. But when the coronavirus binds to it, it sets off chemical changes that effectively fuse the membranes around the cell and the virus together, allowing the virus’s RNA to enter the cell.

The virus then hijacks the host cell’s protein-making machinery to translate its RNA into new copies of the virus. In just hours, a single cell can be forced to produce tens of thousands of new virions, which then infect other healthy cells.

Parts of the virus’s RNA also code for proteins that stay in the host cell. At least three are known. One prevents the host cell from sending out signals to the immune system that it’s under attack. Another encourages the host cell to release the newly created virions. And another helps the virus resist the host cell’s innate immunity.

How does the immune system fight it off?

As with most viral infections, the body’s temperature rises in an effort to kill off the virus. Additionally, white blood cells pursue the infection: some ingest and destroy infected cells, others create antibodies that prevent virions from infecting host cells, and still others make chemicals that are toxic to infected cells.

But different people’s immune systems respond differently. Like the flu or common cold, covid-19 is easy to get over if it infects only the upper respiratory tract—everything above the vocal cords. It can lead to complications like bronchitis or pneumonia if it takes hold further down. People without a history of respiratory illness often have only mild symptoms, but there are many reports of severe infections in young, healthy people, as well as milder infections in people who were expected to be vulnerable.

If the virus can infect the lower airway (as its close cousin, SARS, does more aggressively), it creates havoc in the lungs, making it hard to breathe. Anything that weakens the immune system—even heavy drinking, missed meals, or a lack of sleep—could encourage a more severe infection.

How does it make people sick?

Infection is a race between the virus and the immune system. The outcome of that race depends on where it starts: the milder the initial dose, the more chance the immune system has of overcoming the infection before the virus multiplies out of control. The relationship between symptoms and the number of virions in the body, though, remains unclear.

If an infection sufficiently damages the lungs, they will be unable to deliver oxygen to the rest of the body, and a patient will require a ventilator. The CDC estimates that this happens to between 3% and 17% percent of all covid-19 patients. Secondary infections that take advantage of weakened immune systems are another major cause of death.

Sometimes it is the body’s response that is most damaging. Fevers are intended to cook the virus to death, but prolonged fevers also degrade the body’s own proteins. In addition, the immune system creates small proteins called cytokines that are meant to hinder the virus’s ability to replicate. Overzealous production of these, in what is called a cytokine storm, can result in deadly hyper-inflammation

How do treatments and vaccines work?

There are about a half-dozen basic types of vaccines, including killed viruses, weakened viruses, and parts of viruses, or viral proteins. All aim to expose the body to components of the virus so specialized blood cells can make antibodies. Then, if a real infection happens, a person’s immune system will be primed to halt it.

In the past it has been difficult to manufacture vaccines for new zoonotic diseases quickly. A lot of trial and error is involved. A new approach being taken by Moderna Pharmaceuticals, which has a vaccine about to enter clinical trials, is to copy genetic material from a virus and add it to artificial nanoparticles. This makes it possible to create a vaccine based purely on the genetic sequence rather than the virus itself. The idea has been around for a while, but it is unclear if such RNA vaccines are potent enough to provoke a sufficient response from the immune system. That’s what clinical trials will establish, if they first prove that the proposed vaccine isn’t toxic.

Other antiviral treatments use various tactics to slow down the virus’s spread, though it is not yet clear how effective any of these are. Chloroquine and hydroxychloroquine, typically used to fight malaria, might inhibit the release of the viral RNA into host cells. Favipiravir, a drug from Japan, could keep viruses from replicating their genomes. A combination therapy of lopinavir and ritonavir, a common HIV treatment that has been successful against MERS, prevents cells from creating viral proteins. Some believe the ACE2 protein that the coronavirus latches onto could be targeted using hypertension drugs.

Another promising approach is to take blood serum from people who have recovered from the virus and use it—and the antibodies it contains—as a drug. It could be useful either to confer a sort of temporary immunity to health-care workers or to combat the virus’s spread in infected people. This approach has worked against other viral diseases in the past, but it remains unclear how effective it is against SARS-CoV-2.

With additional reporting from Antonio Regalado.