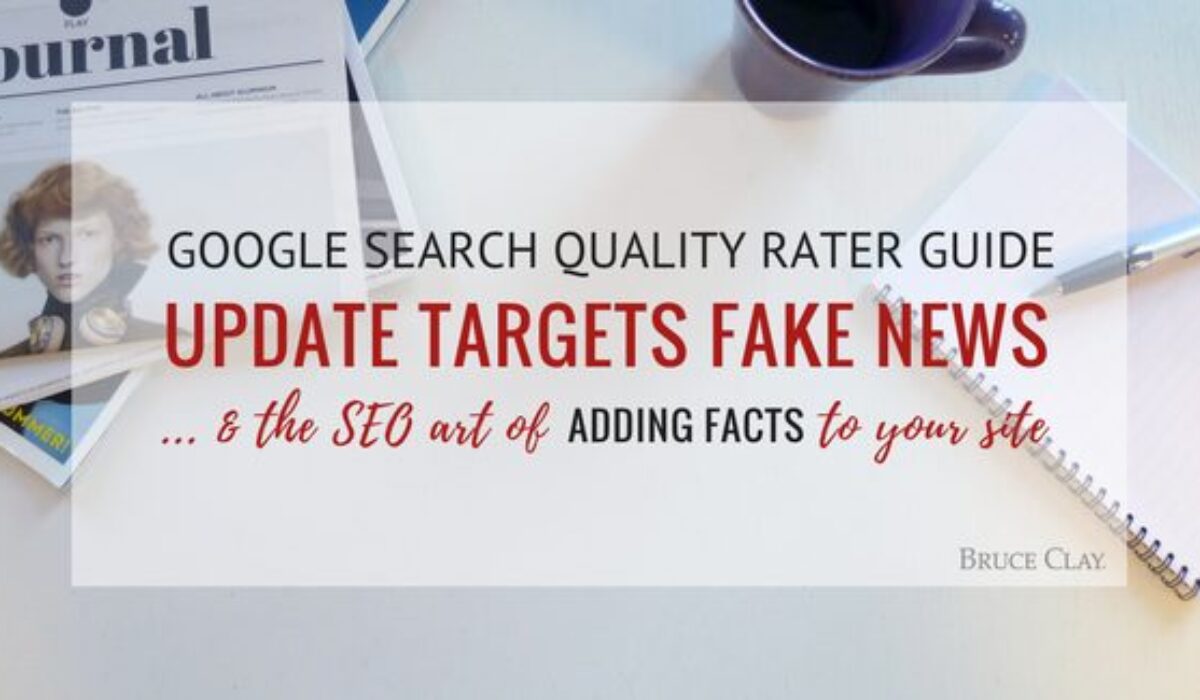 Google is getting more aggressive about calling out fake news in Google search results. Last October, Google announced that publishers could use schema markup to “show a ‘Fact Check’ tag in Google News for news stories. This label identifies articles that include information fact checked by news publishers and fact-checking organizations.” This week the “fact check” label rolled out to all of Google Search.

Marking up the HTML code of a Share the Facts box with Schema.org’s ClaimReview schema could result in a “fact check” label in search results as seen in a live SERP here:

The tech behind Google’s label was developed as a joint venture between Duke University Reporters’ Lab and Alphabet Inc.’s Jigsaw incubator (Alphabet is Google’s parent company). The effort of these two groups produced the Share the Facts Widget which inserts into the HTML code of an article or blog post a “Share the Facts” box that includes a claim/statement and whether or not it is true:

ShareTheFacts.com said of its widget code:

“Share the Facts boxes are also fully machine-readable, enabling new ways of assembling automated collections of fact-check findings from across the Internet.”

This new rich snippet in search results is a game changer for SEOs because now users have a way to verify the accuracy of a claim even before they’ve clicked a result. It is also a continuation of Google’s present initiatives to curtail the visibility of fake news. You can read more about this in the original post below.

The concept of “fake news” exploded into the public zeitgeist at the end of the 2016 presidential election season. It’s been in the spotlight ever since.

The popularity of the term “fake news” as indicated by Google search volume over the last two years skyrocketed the week of Nov. 6, 2016, the week of the U.S. presidential election.

Google is among those concerned with fake news, as we learn from a December 2016 interview with Google CEO Sundar Pichai. Pichai says:

At Google, we’ve always cared about bringing the most relevant and accurate results to users … There have been a couple of instances where (fake news has) been pointed out, and we clearly did not get it right … Just in the last two days we announced that we will remove advertising from anything we identify as fake news.

Pichai’s focus here is towards paid advertisements, but with all the buzz over fake news in the media, SEOs are asking questions about the effect of fake news on organic search.

The bottom line is that Google needs to provide users with quality answers that accurately fulfill the intent of their users’ queries.

So why should SEOs care? What can you do? These are questions organic search marketers are wondering. 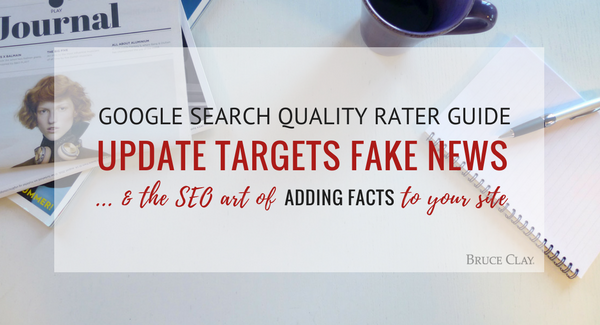 Is fake news beyond Google’s ability to control? You can bet the search engines don’t take that approach.

Google and Bing are able to verify the accuracy of content to some extent. And the search engines are already in a good position to mitigate the spread of fake news in organic search results.

Read on for what we know about:

Two years ago the SEO community saw the first sign of prominent Googlers arguing for the usage of factual evidence instead of backlinks as the primary way of measuring domain authority.

New Scientist summed up the idea in an article titled “Google wants to rank websites based on facts not links.” The article summarized a lengthy research paper outlining a potential change to the way Google would rank sites organically.

For many SEOs, the paper implied that if a web page appropriately mentioned accurate factual evidence, this could contribute to its trustworthiness and thus boost organic rankings. This makes sense, especially since everyone knows content is king.

Additionally, the paper’s argument is in line with a patent that Google filed a decade prior about how to extract and catalog factual evidence from “unstructured documents and build an oracle for various domains” (emphasis ours).

From these documents we can posit that:

If Google and other search engines place such a high value on accurate facts, it is imperative that SEOs be aware of how publishing fact vs. fiction could affect them.

Furthermore, there’s some evidence that Google is working toward taking action algorithmically to reduce the visibility of sites that publish fake news…

While Google has said nothing officially about penalizing a site for inaccurate facts, we’re seeing signs that factual information is important in the search engine’s eyes.

“(Google engineer Paul) Haahr said that they needed to make these specific changes to the guidelines in order to have training data from the raters. And the need for training data would mean they are looking for ways to algorithmically detect and downrank sites that fall into the categories of fake news, hate sites or other sites with dubious and unbacked theories or claims.”

Steps You Can Take To Avoid Being Labeled ‘Fake News’

Being perceived as authoritative in the eyes of the search engines is not easy. Here’s what you have to do to pass Google’s factual accuracy check:

Here’s this tip in action. Real estate sites are especially interested in offering users information about a given geographic area. The aim is to help people learn more about the area of a home, which in turn promotes conversions.

For example, here’s a screenshot of a portion of a property listing page on Trulia.com: 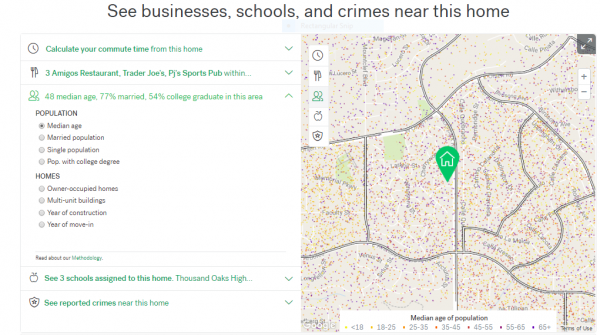 The local data that Trulia publishes on a property listing page are area demographics, nearby businesses, schools and crime statistics. These stats are taken from third-party databases. The inclusion of these publicly available statistics is advantageous because Google sees these facts and weighs them as valuable information that helps a visitor with the intent of learning more about the property in question.

Thus, by adding this information to the rest of the content on the page, Trulia (and other real estate sites that do the same) have better fulfilled the intent of the query by being a one-stop-information-shop for users.

Similarly, Public Storage, another well known brand, includes public data on some pages either to improve the user experience or better fulfill the intent of the query.

Below is a screenshot of a storage facility city page that includes a “City Information” tab with indexable content about the region:

Again, the inclusion of this information alone does not make Public Storage the best site, but it does improve the user experience while simultaneously fulfilling the intent of the query in a more enriched and meaningful way.

In summary, if relevant database options like these are available in your industry or associated verticals, appropriately integrate them your content in order to:

If you are interested in looking for data sources that might work with your site’s content, you might start with Google Public Data, Data.gov or Qliq. There’s a nice roundup of more databases you can mine over here.

In a world of fake news where facts will be verified, set your pages apart by supporting your content with accurate information.

Using facts as a method for measuring authority is not the be all, end all of ranking factors.

In 2015, Google’s Gary Illyes and Bing’s Duane Forrester spoke against building a site off of public data alone.

Obviously, the search engines will have seen or know about any public data you are referencing so, trying to out rank an existing authority is not the best strategy.

Also, the search engines will still consider other factors, so offering only data does not automatically make you the best. As we saw above with Trulia and Public Storage, you need more than just data and facts. A web page with 100 percent facts should not expect to outrank a competing page with the same facts, original content and a stellar UX.

By updating the Search Quality Rater Guidelines to reflect a concern with identifying fake news, Google has shown it is not about to let undeserving pages slip through to Page 1 rankings.

It is not yet 100 percent clear whether Google will take algorithmic action against fake news or factually inaccurate content or just use manual actions. But from all that we have seen, Google has the means to eventually implement an automated process that suppresses sites with inaccurate factual information in organic results. Since the search engine already goes to great lengths to feature accurate information, this would merely be a continuation of their existing efforts.