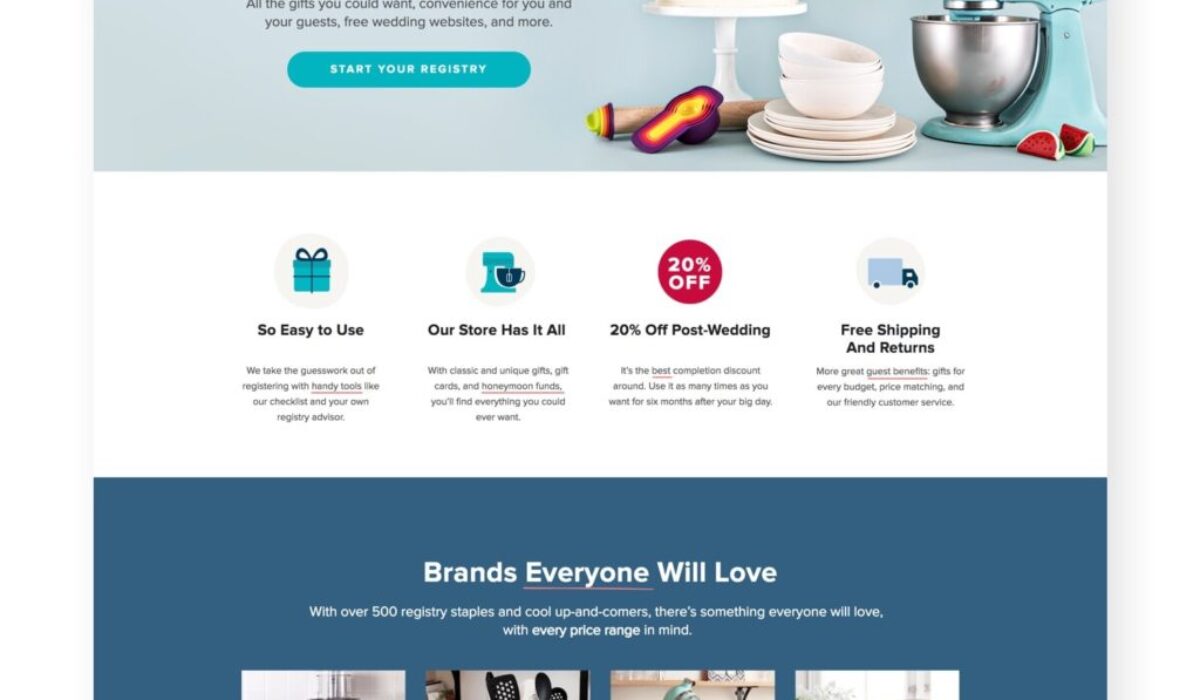 By now, you’ve probably heard something about Zola. If you haven’t, suffice to say that they’re kind of a big deal in the wedding industry.

After exploding onto the scene in 2013, Zola quickly became the fastest-growing wedding startup in the United States, trouncing old-school competitors with their headache-free approach to big-day planning. Zola lets couples manage the whole process in one online space, offering thousands of products from hundreds of brands and providing a ton of flexibility. You can register for everything from a cookware set to a sailing tour, exchange luxury wants for practical needs, and postpone shipping until you’ve settled into your proverbial nest together.

Over the past six years, Zola has continued to expand its full suite of wedding planning tools. The goal? Drive traffic by becoming a one-stop-shop for the newly engaged. It’s worked like a hot damn, too. Today, Zola is well on its way to a unicorn valuation as one of the top ecommerce marketplaces in the world.

But the three-tiered cake of Zola’s tremendous growth has a secret filling. What you probably haven’t heard is how the brand’s marketers helped drive customer acquisition like mad by persuasively communicating Zola’s benefits to the diverse segments of its target audience.

How Can Ecommerce Marketers Get More Sales Through Targeted Messaging?

Meet Ari Gayer and Shivanie Barapatre, core members of the customer acquisition crew at Zola. In just over a year, they (along with the rest of Zola’s marketing team) managed to:

As soon as we heard Zola’s wild acquisition story, we knew we needed the whole picture—so we rang up Ari and Shivanie at the company’s headquarters in NYC to get the details.

Ari, who’s been at Zola for three years and is now Head of Acquisition, played a key role in the company’s quick success. Since 2016, he’s been responsible for driving traffic to Zola’s ecommerce property and getting new customers into the ecosystem—and as with all fast-growth startups, there’s an urgency to keep the momentum going.

Part of the challenge has always been that Zola’s audience is pretty unique in ecomm. Couples sign up for planning tools anywhere from several months to a few years ahead of their actual wedding (which is when Zola makes bank). This means the brand’s target customers have varying levels of familiarity with the wedding planning process: some just need to hear what makes Zola special, while others still need to be sold on the specific tool they’re looking for. And by continuing to add new functionality to the platform, Zola has been broadening its use cases while further segmenting its audience.

Increasing the number of soon-to-be-weds on the platform was priority number one for Ari and his team (including Shivanie, who came aboard in 2018), and together they implemented a robust paid search and social strategy. But it’s one thing to get traffic, and a whole ‘nother thing to convert traffic.

It didn’t take long for the Zola marketing crew to recognize that the diversity of its audience (in knowledge and intent) meant that sending all of its traffic to one place (like the Zola homepage) wasn’t the best way to get couples registered. Instead, they started experimenting with how they could deliver a relevant and compelling pitch to each of their segments—and that meant landing pages.

A lot of the work [was] about improving the conversion rate of users once they actually land[ed] on the page. And so, managing search, a lot of that—by extension—ends up being landing page testing.

Ari, Shivanie, and the squad had dabbled with using landing pages to target people who were looking for a specific planning tool, or who were at a particular stage of the signup process. Early returns showed that landing pages had the potential to help them get more lovebirds registered than they could through their website alone.

The problem was that Zola’s marketers were coding pages the ol’ fashioned way and using a third-party optimization tool to test. They didn’t have a method to launch pages as quickly as they wanted and it slowed down their execution.

We were doing smaller-scale things, like changing a hero image, changing button copy or button color, stuff like that. But we wanted to build completely new landing pages. Something much larger scale, and with the potential to have a much higher impact.

Ari knew that landing pages could play a bigger role in their signup journey, becoming an important first-touch and better communicating the benefits of Zola—especially for people who were unfamiliar with the platform.

It’s helpful to have a precursor to a product page that introduces you to the Zola universe—what we offer, what we provide, what the benefits are. It allows us to give a great first impression of who we are and what we bring to the table before having visitors just jump into the product.

If they were really gonna crank customer acquisition into overdrive, Zola’s marketing department needed a way to speak convincingly to each of their individual audience segments. To do that, they’d have to find a quicker, easier way to launch landing pages on their own.

Enter Unbounce. With a full-fledged landing page platform in their arsenal, Ari and Shivanie were suddenly able to:

Ari points to Zola’s recent collaboration around wedding invitations with Draper James, a clothing line founded by Reese Witherspoon, as an example of how the Unbounce builder made his team more independent.

With Unbounce, Ari and his team dragged-and-dropped together a landing page celebrating the partnership in no time—and it looks incredible.

Now that they’re able to create landing pages faster, Zola’s marketing team has learned way more about their audience intent—and how to shape their messaging to increase the chance of conversion.

For example, Ari and Shivanie recognized they could adjust their landing page content for different search queries that reflect how far along a visitor is in the buying process. Core terms like “wedding registry” and “wedding website” indicate someone who knows exactly what they want, in which case Zola is better off making a direct pitch around specific benefits and pricing structure.

When we see people searching for a much longer-tailed term, then we know to tailor our messaging [on the landing page] to have a lot more information about what a registry is before introducing Zola’s registry and explaining how it compares to others.

[We’ll present] a lot more educational information upfront, because we know we’re climbing a steeper hill to get this person to convert.

Based on our Unbounce testing, we realized that there are different intents for people who are coming to our pages on desktop versus mobile. What Unbounce has really helped us do is create different experiences for those devices.

For example, being able to have more clear, concise messaging on mobile—with less text and visuals—is going to convert better.

Since starting to use Unbounce, Ari and his team have created well over 300 landing pages. That’s almost one landing page for every day they’ve been on the platform. (Quite a change from waiting around for developers, huh?)

These pages are each designed to speak to a specific kind of prospect: someone using Pinterest on desktop that wants to build a wedding website, or a not-yet-engaged couple interested in taking a quiz to learn how their preferred home decor style could shape their registry. (Yeah, it gets that specific.)

The number of new landing pages that we’re launching has grown exponentially. Unbounce has allowed us to tailor those pages to who the audience is, to have much more coherent advertisements—between the ad, the landing page, and the whole experience.

Being able to launch new pages fast means that Ari and Shivanie can always be optimizing to figure out what resonates best with their audience. (ABO, people.) Getting super precise in their targeted messaging has helped Zola turn more of their paid Google and Facebook traffic into new signups.

That’s not all. Ari and Shivanie’s landing page experiments have been so successful, they’re carrying through their learnings to shape the structure of Zola’s homepage.

We took the highest-converting landing page we had and saw that the specific image, the hero copy, the order of sections were converting very well. So we picked up that page, built it out a little bit more in terms of copy, and applied the same structure to our main homepage.

Here’s Zola’s website homepage alongside one of its most visited landing pages—but which is which?

Ari and Shivanie had the daunting task of continuing to expand the customer base of an ecommerce darling already growing at breakneck speed. With the ability to quickly build landing pages that address the specific intent or knowledge gap of a target customer, they managed to refine their paid search and social campaigns and deliver a sizeable uptick in conversions. Not bad for just over a year of work.

The takeaway? Relying on developers to execute your marketing is incompatible with growth. To get the same kind of results as Ari and Shivanie, you need to be able to learn about your audience fast and optimize your digital marketing faster. You need to be able to speak compellingly to your different audience segments in a way that makes clear why your product is a great fit for them.

You probably need a landing page.