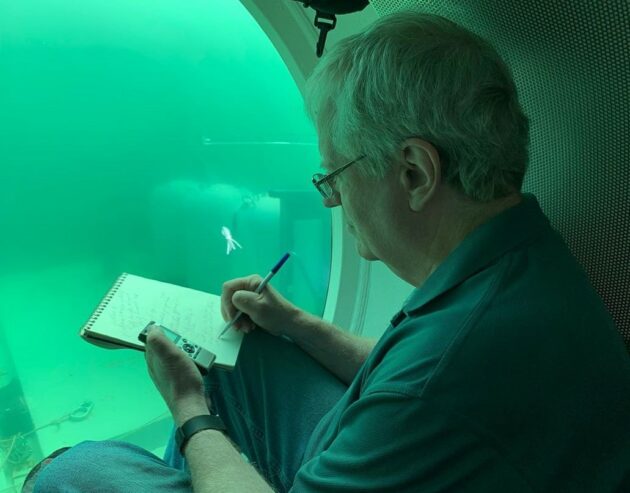 POSSESSION SOUND, Wash. — Steering a five-person submersible is like playing a video game, except for the fact that you’re piloting a nine-ton piece of hardware at watery depths that are inaccessible to all but the most experienced divers.

I got my chance to play this week during a survey dive in a pocket of Puget Sound known as Possession Sound, courtesy of OceanGate, a manufacturer and operator of submersibles that’s headquartered in Everett, Wash.

During our three-hour tour, GeekWire photographer Kevin Lisota and I were taken around the sound at depths ranging as low as 350 feet, in OceanGate’s Cyclops submersible. We even played a supporting role in finding a colony of anemones in an unexpected underwater setting.

The trip was part of a summertime expedition to get a better sense of the ecosystem on the bottom of Puget Sound, in collaboration with researchers from the Washington State Department of Fish and Wildlife and the National Oceanic and Atmospheric Administration.

If things had turned out differently, OceanGate would just now be wrapping up a series of submersible survey dives to the wreck of the Titanic in the North Atlantic. But due to last-minute regulatory snags, the company had to delay those trips until next year.

That’s why OceanGate pivoted to the Puget Sound survey, and why Kevin and I found ourselves scrunched alongside marine biologist Tyler Coleman, pilot-in-training Mikayla Monroe and OceanGate CEO Stockton Rush on Tuesday.

We began the morning with a safety briefing at the dock at Everett’s marina, led by Dan Scoville, OceanGate’s director of systems integration and marine operations. One of his bits of advice had to do with keeping calm if you hear thumps and bumps on Cyclops’ hull.

“If you can hear it, you’re OK,” he said. If there’s a catastrophic collision and breach, you wouldn’t be around long enough to hear it.

Then the Cyclops was towed out on its launch-and-recovery platform to Possession Sound by one of the boats in OceanGate’s fleet, the Kraken. A little more than an hour later, the Cyclops was in position, and we headed out to meet it on a faster boat, the Vito.

Once we were dropped off on the floating platform, we handed up our backpacks, took our shoes off and climbed into Cyclops’ 5-foot-wide cabin. Mikayla sat on a mat toward the back, flanked by video screens that showed camera views and sonar readings. Stockton sat next to her, ready to give guidance. Tyler sat in the middle.

Kevin and I had front-row seats, looking through Cyclops’ hemispherical acrylic viewing window. We let our stocking-clad feet rest on the window’s bottom, even though we were warned that we might feel the chill of the water on the other side.

Once all the final checks were made, the crew members on the Vito, the Kraken, the platform and in the submersible took a five-minute timeout, known as a “stopski,” just to make completely sure all systems were go. (The idea — suggested by Scott Parazynski, a former NASA astronaut with local family connections — was inspired by the built-in holds that are included in space launch countdowns.)

Then it was time to dive. First the launch and recovery platform blew the compressed air out of its flotation tanks, in a process that had us dipping down backward into the water at a 20-degree angle. Green-tinted water sloshed wildly over our field of view.

“Is this a freakout moment for some people?” I asked Stockton.

“I haven’t run across that yet,” he replied. “You could be our first.”

Within minutes, we were sinking below the photic zone, where sunlight could penetrate to fuel the green plankton that tinted the waters. The view outside was total darkness, until Mikayla turned on the floodlights on each side of our window. Even then, plankton and the other particles floating in nutrient-rich Puget Sound cut the visibility to just a few feet around us.

Our first destination was right beneath us: We headed for a wire cage containing a pile of salmon guts, which was dropped down on a line from a buoy to attract whatever creatures were foraging at the bottom. When we pulled up to the cage, we saw a smattering of rockfish (of the quillback and canary varieties), with 4-inch-long prawns and an occasional crab skittering through the scene, looking for a meal.

The prime targets for OceanGate’s survey are shark species, and especially the rare, crowd-pleasing sixgill shark. We hoped to follow in the footsteps of Seattle rap musician Macklemore, who created a media splash in 2014 when he went looking for Puget Sound sixgills in a different Oceangate sub.

We saw no sixgills, but we did catch sight of a slim, spiny dogflsh shark as it threaded its way around the bait box.

“So we had our first official shark?” I asked Tyler. “Yup,” he said.

Then we headed off to a wide stretch of muddy bottom, punctuated by holes that provided shelter for the prawns and other bottom-feeding critters. Stockton sidled over to me, holding the modified Sony PlayStation game controller that’s used to steer the sub. “Want to drive?” he said.

It took me a while to get the hang of the controls: The front buttons serve as “dead man’s switches,” which have to be pressed in order to activate the controller’s dual joysticks. The left joystick controls the up and down thrusters, and the right joystick controls horizontal thrusters for forward and back, left and right.

Simple, right? Nevertheless, I occasionally rose high enough to lose sight of the bottom, and sank low enough to plop the sub into the mud and send clouds of sediment rising up in front of our window.

To get ourselves out of those obscuring clouds, I had to drive the sub out of the haze into clearer waters. At least there were no rocks to run into, which is why Stockton and Mikayla brought us to a field of mud before they handed me the controller.

After a few minutes of meandering, Mikayla reported that there was something showing up on the sonar, about 15 meters dead ahead. Stockton took back the controller, and guided by Mikayla’s callouts, he brought us right up to what looked like a garden of cauliflowers, plunked in the middle of an underwater desert.

It turned out that a tree stump had sunk 350 feet to the bottom, heaven knows how many years ago, and a colony of anemones had taken root there.

Stockton was impressed, and he told Mikayla to take note of the coordinates.

“The visibility is probably 10 feet today, but we can get 5 feet away, so that’s OK,” Stockton told me. “Imagine trying to find this if you were diving. … Nobody’s ever seen this log before, I’ll bet you even money.”

Toward the end of the tour, we returned to the area where bait had been dropped to the bottom. Mikayla turned the lights off, waited for a school of rockfish to swim in front of our window, and then turned the lights back on so we could snap photos.

READ ALSO  Where to buy the powerhouse gaming phone

When it was time to ascend, we rose through the dark murk and back into the sunlit green haze near the surface. Kevin and I were deputized to watch for the whitish outline of OceanGate’s launch-and-recovery platform, anchored a few meters below.

It took a couple of tries to get properly “locked in” on the platform, due to a balky thruster. I was feeling grateful that Mikayla and Stockton were at the controls (and hoping I hadn’t damaged the thruster during my training session).

At last we were locked in and lifted up. The sun seemed unusually bright as we climbed back up through the hatch and were motored back to shore. On the way back, Stockton talked about OceanGate’s plans to bring the submersible experience to a wider audience.

“Diving’s no fun after you’ve been in a sub,” he said.

Taking people down to the Titanic is still OceanGate’s prime objective: The submersible that’s designed for that role, which was initially called Cyclops II but is now known as Titan, proved it could safely get to Titanic-worthy depths this year during a series of test dives in the Bahamas.

The postponement of the Titanic Survey Expedition means there’s not a lot for Titan to do until next summer. It’s currently being prepped for an extra round of stress tests, plus equipment upgrades that should smooth the way for the 2020 season. OceanGate’s Titanic customers are paying more than $100,000 to participate in the adventure as mission specialists, and most of them are keeping their reservations despite the delay.

Stockton said that OceanGate’s subs — including Cyclops and Titan as well as the two-person Antipodes — are currently certified for research missions such as the Titanic expedition, but not for more casual tourist jaunts.

Now OceanGate is seeking waivers from the Coast Guard that would allow the company to offer submersible tours for something like $1,000 or $2,000 per person. That’s more than operators in Hawaii charge for submarine tours, but those tours go only 100 feet beneath the surface and last only 45 minutes or so. OceanGate’s tourists would get an experience even more thrilling than ours — assuming that the regulatory go-ahead is given.

“It’ll probably be six to 12 months before we get approval,” Stockton told me.

Stockton and his team of 27 employees are also looking into whether their subs can be used for infrastructure inspection and environmental surveys. And they’re planning to build a bigger, better submersible called Cyclops III, which could handle depths of 6,000 meters (20,000 feet).

To help fund those projects, OceanGate is in the midst of a $5 million debt financing round that was reported to the Securities and Exchange Commission in April.

So what’s tougher? Navigating the depths of Puget Sound, or negotiating the shoals of the startup world? Ten years after founding OceanGate, Stockton Rush is clearly adept at doing both. But personally, I’d rather be steering the sub.

Correction for 4:36 p.m. PT Sept. 1: In a previous version of this report, we incorrectly identified a ratfish as a dogfish shark. We’ve amended the ID for the ratfish, and added a video screengrab of the dogfish. Woof! Also, we’ve corrected the anticipated cost of a submersible tour to be $1,000 to $2,000 per person, instead of per day.