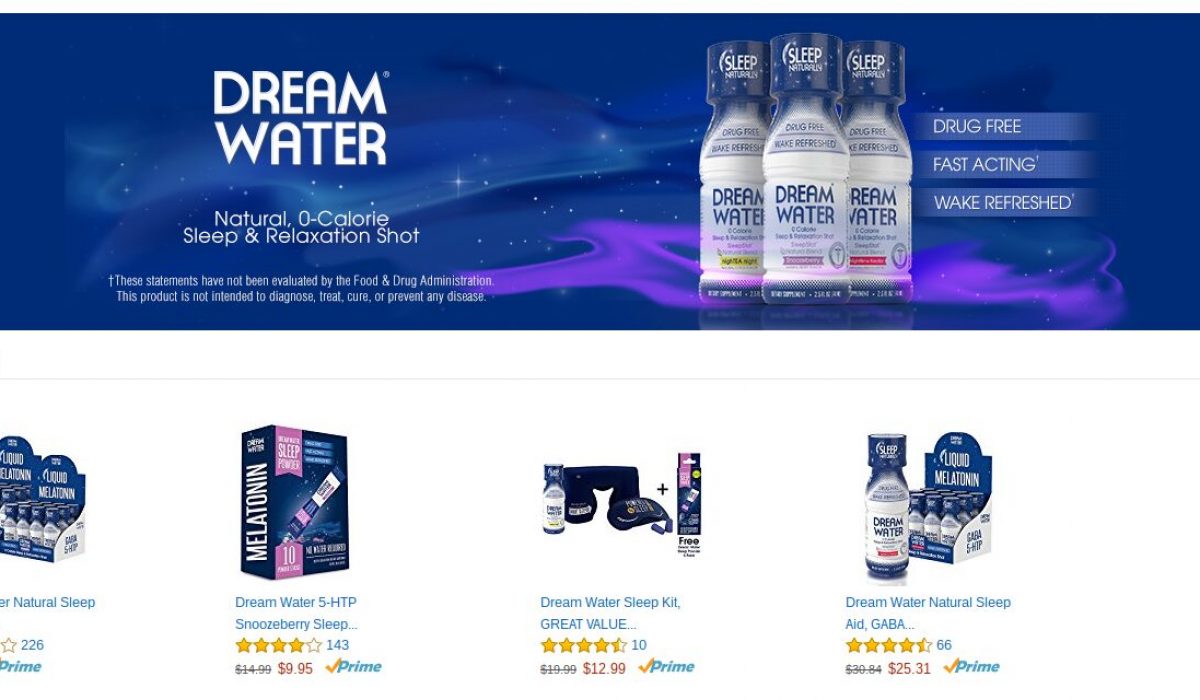 We all understand the reality of sleep deprivation. A combination of increasingly demanding jobs, the widespread availability of caffeine and other stimulants, distracting technology, and unchecked sleeping disorders have made it incredibly difficult for people to get a full night’s rest—even if they want to.

The CDC has even gone as far as to say that “insufficient sleep is a public health problem.”

This health problem was exactly what entrepreneur Vincent Porpiglia wanted to solve when he and his team came up with the idea for Dream Water, a natural sleep aid that combines GABA (Gamma-Aminobutyric Acid), melatonin, and 5-HTP (5-Hydroxytryptophan) to give you a better night’s sleep.

In an interview with Society’s Choice magazine, Porpiglia shares that he invented Dream Water because he wanted to get out of an all-too-familiar situation: lying awake through yet another sleepless night.

As his mind wandered, he thought, “There are lots of drinks to give you energy so what about ones to make you sleep?” Finally, in 2006, two years after he had conceived Dream Water, the company’s eight-ounce bottled drink was stocked on store shelves across Miami and New York.

Today, Dream Water is distributed through 30,000 stores in the US, including Kroger, Safeway and Wegmans supermarkets, CVS Health, Duane Reade and Walgreens stores, 7-Elevens, and Hudson News airport stands—an enviable position for any retail brand.

According to Dream Water’s co-founder and CEO David Lekach, the company first grew through its distribution partnerships with real-world retailers. For years, ecommerce simply wasn’t a big consideration because consumers weren’t yet dependent on the convenience and ease of online shopping.

Dream Water continued to invest heavily in securing more deals with new retailers and improving their onsite placement and promotion with existing retailers. These days, the majority of the firm’s revenue still comes from its retail distribution channel.

By 2010, though, the team behind Dream Water noticed a huge change in consumer behavior. Ecommerce was an increasingly popular industry. Customers were finally willing to purchase products they hadn’t seen or touched in person yet, from brands they were unfamiliar with.

Lekach recalls, “I’d show up at other people’s houses and see piles of packages from Amazon or Gilt at their door.” Lekach knew then ecommerce could be a viable growth channel for Dream Water.

To grow the company’s direct-to-consumer marketing program, Dream Water invested in SEO with the hopes of attracting users of natural sleep aids. However, that was a costly endeavor which produced few results.

Consumers searching for sleep aids on Google were already pretty certain of what they wanted: products in pill or tablet form. They weren’t convinced that a drinkable sleep aid was right for them (yet).

Soon, it became clear that Amazon was where Dream Water was meant to be, especially for a product online shoppers knew little information about. Lekach explains, “We were trying to optimize [our direct-to-consumer marketing strategy] for Google, but consumers were conducting more exploratory search on Amazon.”

A recent report by BloomReach, an ecommerce personalization platform, revealed, “55% of consumers turn to Amazon first when searching for products online.” This is compared to 28% of consumers who default to search engines like Google.

As a seller on the world’s largest ecommerce store, Dream Water could capture customers who were excited about discovering new and interesting products. In 2011, Dream Water finally launched its Amazon store. Instead of growing ecommerce sales through its website, Dream Water defaulted to Amazon.

Lekach reasons, “The fish are already in the pond. Let me go there.” And he was right. A major factor that sets Amazon apart is its millions of daily visitors.

So how did they do it?

Still, it’s vital to your business to do your research. Your products should be niche and well-optimized in order to be seen by consumers. There are many, many ecommerce businesses on Amazon, so you need to optimize for this site just as you would for a search engine.

With listing optimization, changes you make to your product listings typically have an immediate impact on sales. “On Amazon, you can experiment and play with it any way you want and then see the results from those changes,” shares Lekach.

Amazon is different from other popular ecommerce stores for a few other reasons, too. On Amazon, customers want to be educated about your product. The most successful product listings offer in-depth descriptions along with detailed graphics, educational content, and even a video.

Brands can support a wide assortment of products and launch new ones quickly, unlike with real-world retailers who have limited shelf space. Simply bundling products together, too, will create a new SKU on Amazon.

Good customer reviews are paramount because Amazon shoppers rely on their peers’ opinions when making purchasing decisions, especially for products they haven’t yet tried from brands that are new to them.

Dream Water leveraged the inherent trust consumers had in Amazon and built an experience that aligned with the buying behaviors of shoppers there to sell its products.

And Dream Water marries an organic listing optimization strategy with a strong paid advertising strategy too, by using Amazon Sponsored Products to drive additional traffic to the company’s different products.

Ecommerce entrepreneurs commonly forget that there are enormous opportunities to sell their products outside of their own website. A few popular examples include:

And many other enterprising individuals have figured out clever strategies to sell direct-to-consumer through Instagram posts, Facebook groups and Craigslist. Though conventional wisdom may suggest ecommerce store owners should build loyalty to your own website, entrepreneurs like David Lekach would argue that there may be a marketplace out there where your customers are more likely and more eager to find you.

Therefore, you’ll want to go out and test selling your products on different marketplaces to discover what works best for your business.