The human race is wired for storytelling.

There is evidence of this as far back as prehistoric times when men drew on cave walls and wrote in hieroglyphics on tombs. Humans feel the need to tell their stories and communicate with the public. The same is true for entrepreneurs or companies, though when they tell their stories for business purposes, it’s called public relations (PR).

While PR has existed through the ages, it became a recognized strategy and profession early this century.  It garnered widespread adoption and became a standard function for businesses of all sizes around the world.

The rapid growth of PR in this century can be traced to and correlated with the introduction of several technologies, specifically the internet. Each technology opened up new channels, new ways of operating, and shifted the profession and practice in ways that could not have been imagined when they were first introduced.

A brief timeline of PR as practice and profession

Public relations is, “a strategic communication process that builds mutually beneficial relationships between organizations and their publics,” according to the Public Relations Society of America (PRSA).

The following is an outline of historical moments within the PR industry.

A brief timeline of how PR has evolved

PR from the beginning

Early philosophers like Plato and Aristotle recognized that public opinion matters. In 469 BC, Socrates spoke publicly to engage his crowds of young thinkers in a debate. This led to philosophers known as “sophists” teaching the art of persuasive speaking to nobleman seeking public office.

Many historians cite the establishment of the “Publicity Bureau,” a firm created in 1900, as the start of the modern public relations profession in the United States. It was a firm started by three former newspapermen and thought to be the first official PR company.

In the early 1900s, PR outlets consisted of print media and radio stations. To get their stories out to the public, PR firms relied on postal mail and some telephone access, though this was often slow and limited.

In 1912, the post office started used airplanes to deliver mail. However, there was no overnight mail service. Telephones were becoming common in places of business and homes, but it wasn’t until 1915 that coast to coast calls were possible. Breaking news might have taken days to reach the public due to the available technology of the time.

Activists used public relations during the war to spread propaganda, then moved into the private sector in the 1920s.

As a profession, PR became established first in the United States by Ivy Lee and Edward L. Bernays, then spread internationally. The Marshall Plan in 1948 helped spread the practice to Europe as American companies opened offices abroad and with them, PR departments. At this time, public relations had a direct relationship with the media, with little input from the public. The only feedback available was the occasional letter to the editor in response to a story.

In 1923, with the publication of his book Crystallizing Public Opinion, Edward L. Bernays introduced the idea of a ‘two -way-street’ of communication between a company and the public. In this relationship, public relations was expected to explain the public to the client and vise versa. This ran contrary to the popular misconception that public relations was deceptive and manipulative. A two-way approach allowed for the integration of the public’s experience and opinions with the practice of PR.

While the concept was revolutionary at the time, Bernays had no idea as to how later in the century, technology would help make this two-way conversation an easy reality and one that could happen in real-time.

The rise of the PR practice and PR firms

In the 1950s, television became popular in homes, businesses, and institutions across the United States and United Kingdom. It became the primary medium for influencing public opinion.

It had the advantage over print and radio – a live human speaking directly to the viewer. This increased engagement, as people process images faster and retain them longer. It also provided an entirely new platform for public relations firms while demanding new skill sets, which created additional opportunities for them.

Not only did the PR professionals need to craft and pitch a story to the media, but they were also now responsible for helping their clients looking and sounding good during on-air interviews.

In 1980, CNN was launched. It was the first television network to broadcast 24 hours a day, where television and radio stations had typically kept hours of operation from 6 a.m. to 11 p.m.

This was the beginning of a major shift in the news cycle as we knew it. It meant that news could be reported in real time, not just during the hours when a station was broadcasting.

The internet changed everything for PR

The introduction of the internet changed everything in regard to public relations. As a platform, it offered universal access to anyone who could log on to it. This made it possible to reach anyone anywhere on the planet, in many instances, for free.

Building on the introduction of 24-hour news by CNN, the Internet made it so that every website, online magazine, or online news channel was now accessible 24 hours a day. It also was a great equalizer. Any of these online outlets could reach the top, irrespective of whether they were created by a professional media company or an ordinary citizen.

This growth in availability and accessibility created more outlets for PR and news and it changed the speed at which news traveled.

In contrast to a print publication, the internet was more akin to TV and radio in that news could be broadcast directly to the public. It also created the ability for the general public to collect, analyze, and disseminate news, information, and opinions. This became known as citizen journalism. Networks and the media were now competing with the public in some cases.

The role of public relations grew again as practitioners and agencies needed to learn about websites, online advertising, and Search Engine Optimization (SEO). The lines were beginning to blur and the industry questioned where  PR’s role ended and marketing began.

The rise of the public in PR

The Internet also created the ability to have instant, two-way conversations. With TV, radio, or newspapers, readers or listeners could write in or call in to the media. Their response might be published or aired at a future date.

With the internet, the public could post comments on stories in real-time. This created a shift in the balance of power, as well as the role of the audience.

It also created a shift in the role and responsibility of PR professionals. Their role has now morphed from crafting and pitching a story to monitoring stories around the clock and be prepared to do damage control if the public reacts adversely to a story.

Social media expanded the number of channels and formats available for public relations. It also expanded the reach of the internet and the role of the individual in the PR conversation. Individuals could host blogs, YouTube channels, websites, Instagram stories, Facebook posts, Facebook live videos, and podcasts – some of which have become as popular as major networks. In other words, individuals could become the media or comment on, like, and share stories on major media platforms. Both cases helped further expand the functions and responsibilities of public relations, with the unique requirements needed for each platform.

Thanks to the internet and social media, stories now have the potential to go viral very quickly. Stories can be shared from offline to online and across various social media, as technology has made it easy to click and share. Comments optional.

The negative side of this for companies and their PR teams is that a story can quickly garner negative feedback and backlash, which can also go viral. Damage control can feel like trying to stop a tsunami with a few sandbags, as the speed of news and information travels rapidly. 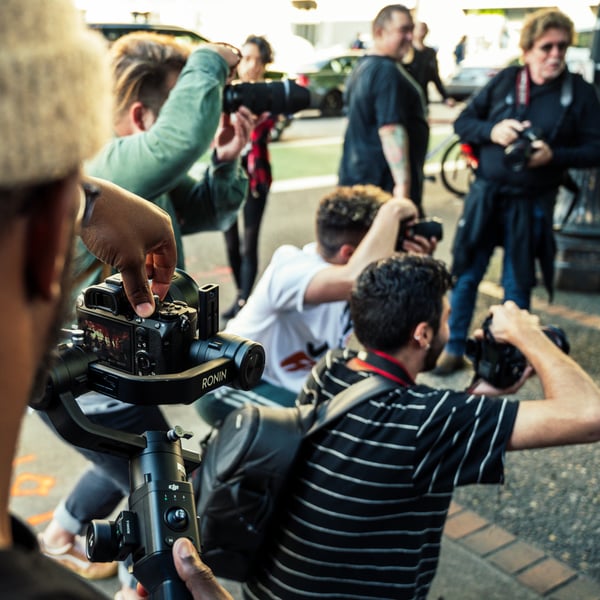 Social media and smartphones in the PR industry

Another way that the internet and social media have transformed PR is that journalists and media professionals, producers, and so on use them to find story ideas and identify sources (e.g. topic experts).

Smartphones with internet access have given us the ability to be reached wherever we are. People carry their phones with them everywhere, so access to the audience is instant.

Additionally, the advanced technology in smartphones, specifically the imaging and internet access, has advanced citizen journalism rapidly. The enhanced quality of the image capturing capabilities of phones continues evolving. This makes it easy to capture high-resolution photos and videos in a flash. News in this high-resolution is now being broadcast by everyday citizens as it occurs; there’s no longer even a 30-second delay.

Smart PR firms and practitioners still craft and pitch stories in multiple formats on various media outlets and channels. They also find ways to invite the public to help create their stories. The latest media outlet is smart speakers. News is now being doled out in one or two minute segments called Flash Briefings on Amazon Alexa devices.

What to expect from PR for the future

The fact that humans need to tell stories and companies want to manage their image and communications hasn’t changed. However, the how, what, and where the stories are shared continues to evolve.

While print publications still exist, many are disappearing in favor of online formats. It’s hard to know what technology will appear next and what shift it will create for public relations. Only the future will tell what new format it takes.

Want to learn more about public relations? Check out our hub with over 30 resources to keep you engaged!