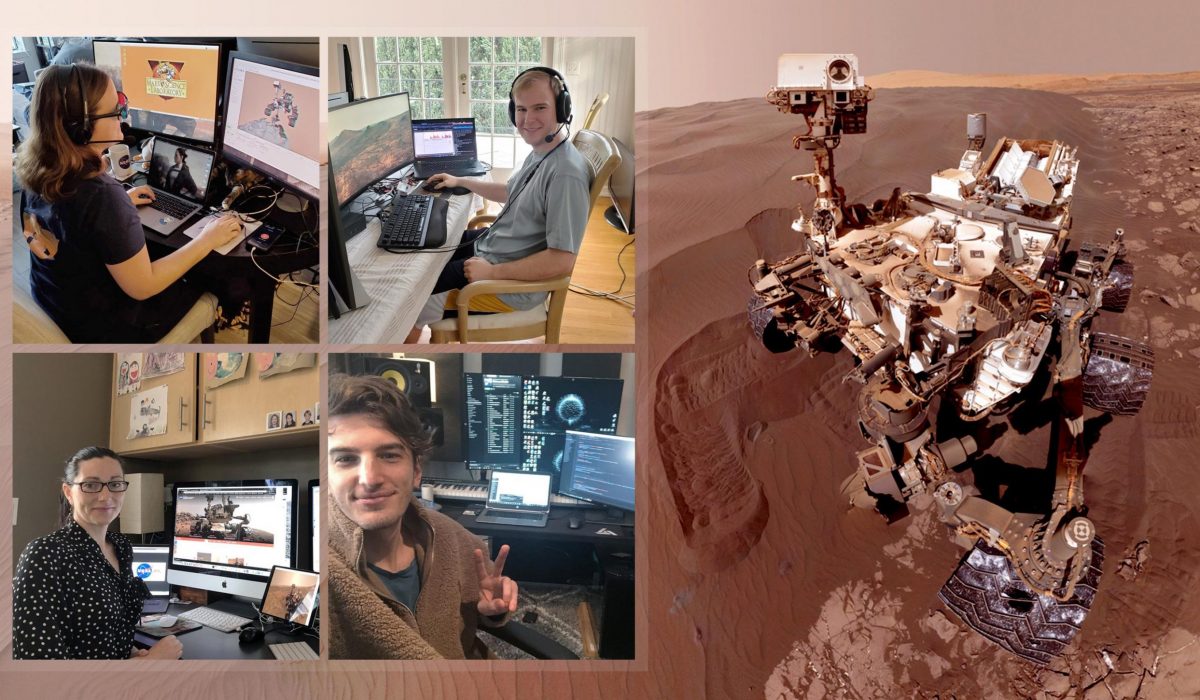 NASA shuts down … sort of

On March 8, NASA’s Ames Research Center in California became the first major agency site to issuemandatory telework policies, after one of its employees tested positive for covid-19. The rest of NASA followed suit soon after.

Any tasks that could be done remotely were shifted to telework, including most kinds of ongoing missions and research projects. Any work that needed to take place on site but could wait was halted. Even work on the long-delayed James Webb Space Telescope was suspended.

Projects deemed “mission critical” (those that had to adhere to a strict timetable) were excepted from telework restrictions. This included the Mars 2020 rover (now called Perseverance) at the Jet Propulsion laboratory and the SpaceX Crew Dragon launch at Kennedy Space Center. Missions to Mars are launched when Earth and Mars are closest, in order to save on fuel and energy costs. This window comes up about every two years, so Mars 2020 has to launch later this summer if it’s going to get to Mars on schedule. And for Crew Dragon, the argument was that pushing back ISS missions could open up the risk of leaving the space station under-crewed down the road.

Work in the agency’s clean rooms where hardware is built and tested is more or less business as usual. Personnel already wear gloves and masks routinely, but under new guidelines, masks are now a mandatory part of going in to work, as is distancing of at least six feet between people.

Space is an industry of hardware, however. You cannot build and test everything from home.

In the private space industry too, lockdowns have forced labs and hardware facilities to close, putting a halt to activities like launches and manufacturing. Some companies have outright succumbed. Bigelow Aerospace laid off all its employees in late March. Satellite internet company OneWeb filed for bankruptcy, blaming the coronavirus for its inability to raise funds.

Other companies, particularly smaller ones, hit pause in an effort to wait until economies begin opening up again. Rocket Lab postponed launch operations in March but plans to resume June 11. Relativity Space’s work on developing a 3D-printed rocket was slowed (though not stopped) by the pandemic (NASA’s Stennis Space Center, where the company’s rocket engine program was based, has mostly closed). But the company told CNBC it has no plans for layoffs, and it is still operating.

Other companies are pushing forward with little disruption. Although rival OneWeb is defunct, SpaceX has now launched 482 Starlink satellites into orbit for its satellite internet constellation. And SpaceX continues to work on Starship testing. Virgin Orbit attempted its first test flight into space a couple of weeks ago.

What has kept a lot of the industry moving is government contracts, awarded by NASA and the Department of Defense. So far these haven’t slowed down. At the end of April, NASA selected three companies to develop lunar lander systems for the Artemis program. Later this week, it will choose the company that will launch the VIPER rover mission to the moon to prospect for water ice. The agency has also just awarded a contract to Northrop Grumman to develop a habitation module for the lunar Gateway.

During the pandemic, many space engineers have reoriented their efforts to projects more directly associated with the coronavirus. At JPL, NASA engineers developed a new type of ventilator that could be produced rapidly. The design is being licensed freely to interested manufacturers, of which there are now eight lined up. Virgin Orbit developed its own ventilator as well. Blue Origin and Boeing are making face shields and other personal protection equipment for health-care workers.

Other companies have found their services in higher demand than ever. Maxar and Planet, companies that operate a fleet of Earth observation satellites, have seen demand grow for the data they collect, as it helps track global and regional trends in human and natural activity. Telecommunications companies like Intelsat and Hughes have issued statements saying they are working to expand their satellite network capabilities for supporting essential infrastructure, running remote classrooms, and keeping hospitals and clinics online. The use of telemedicine has surged during the pandemic, spurring the European Space Agency to look into whether it could act as an “honest broker” that helps provide oversight and guidelines to satellite companies that want to help directly expand telehealth services. ESA held a symposium in Italy last month to discuss these issues.

With much of the US and other parts of the world starting to reopen their economies, the space industry is now looking forward to returning to normal, or at least a version of normal. Mars 2020 will launch on July 17. NASA and Northrop Grumman are trying to get James Webb development back on track, although a launch date is still to be decided. Work on the Space Launch System, NASA’s new rocket that’s supposed to send people to the moon, should start up again in just a few weeks. NASA now says it expects to launch SLS for the first time in late 2021.