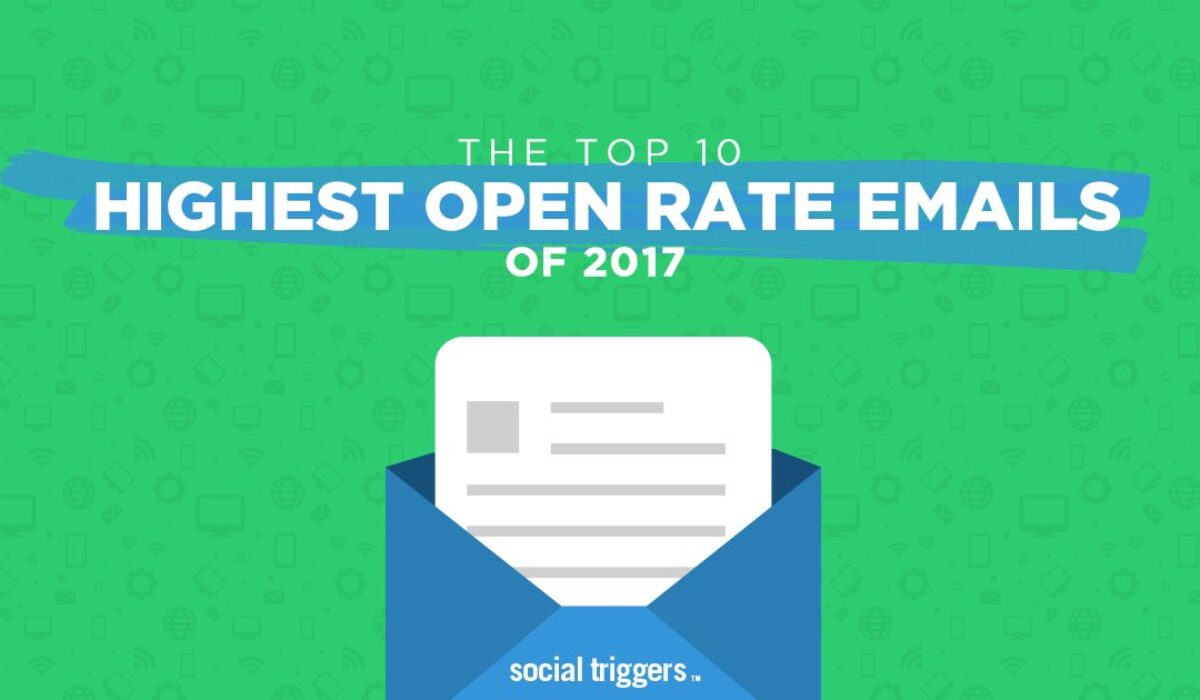 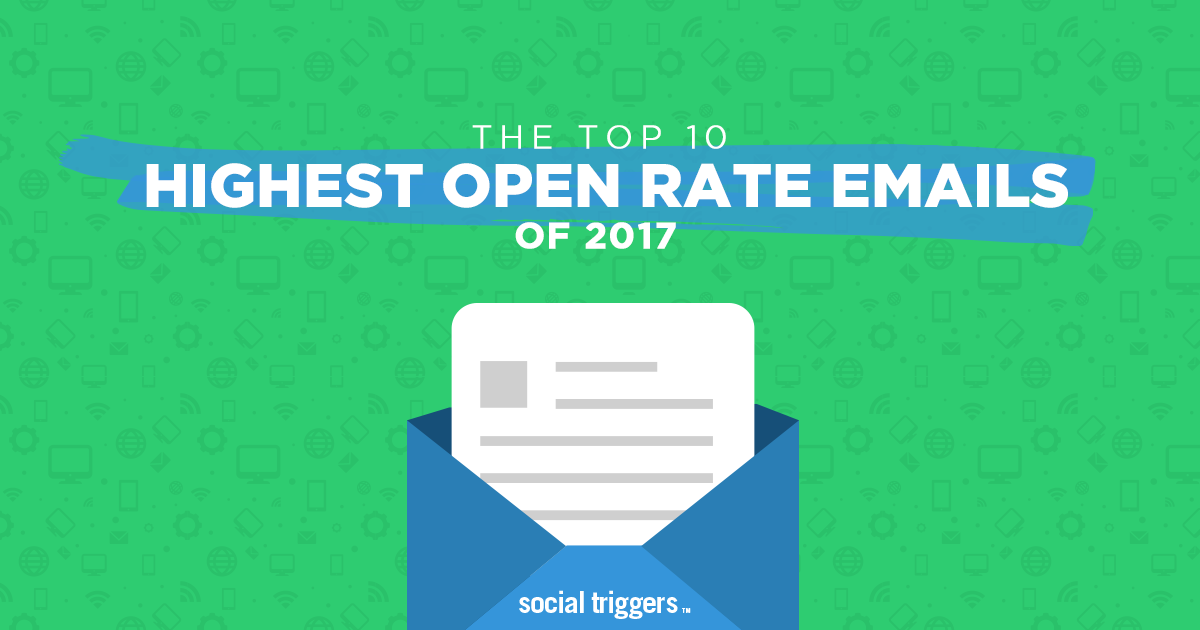 The headline says it all.

With inboxes getting more and more crowded, it’s crucial your emails stand out – now more than ever.

So let me share what worked for me this year… and why.

Hi, I’m Derek Halpern, the founder of Social Triggers. Over the last few years I built my email subscribers from scratch to more than 250,000 subscribers and built a multi-million dollar online business as a result of it (we sell courses, software, and even have a health company, too).

So, needless to say, I may know a thing or two about good email subject lines. As you go through this list, I want to make one thing clear: these emails worked for me at Social Triggers.

And while you may fixate on the subject line and think about copying it for your own list… I recommend you read what I share below each subject line.

The psychology behind why these email subject line worked is much more important than the subject line themselves.

This is something I’ve shared countless times before, but it’s worth mentioning again. 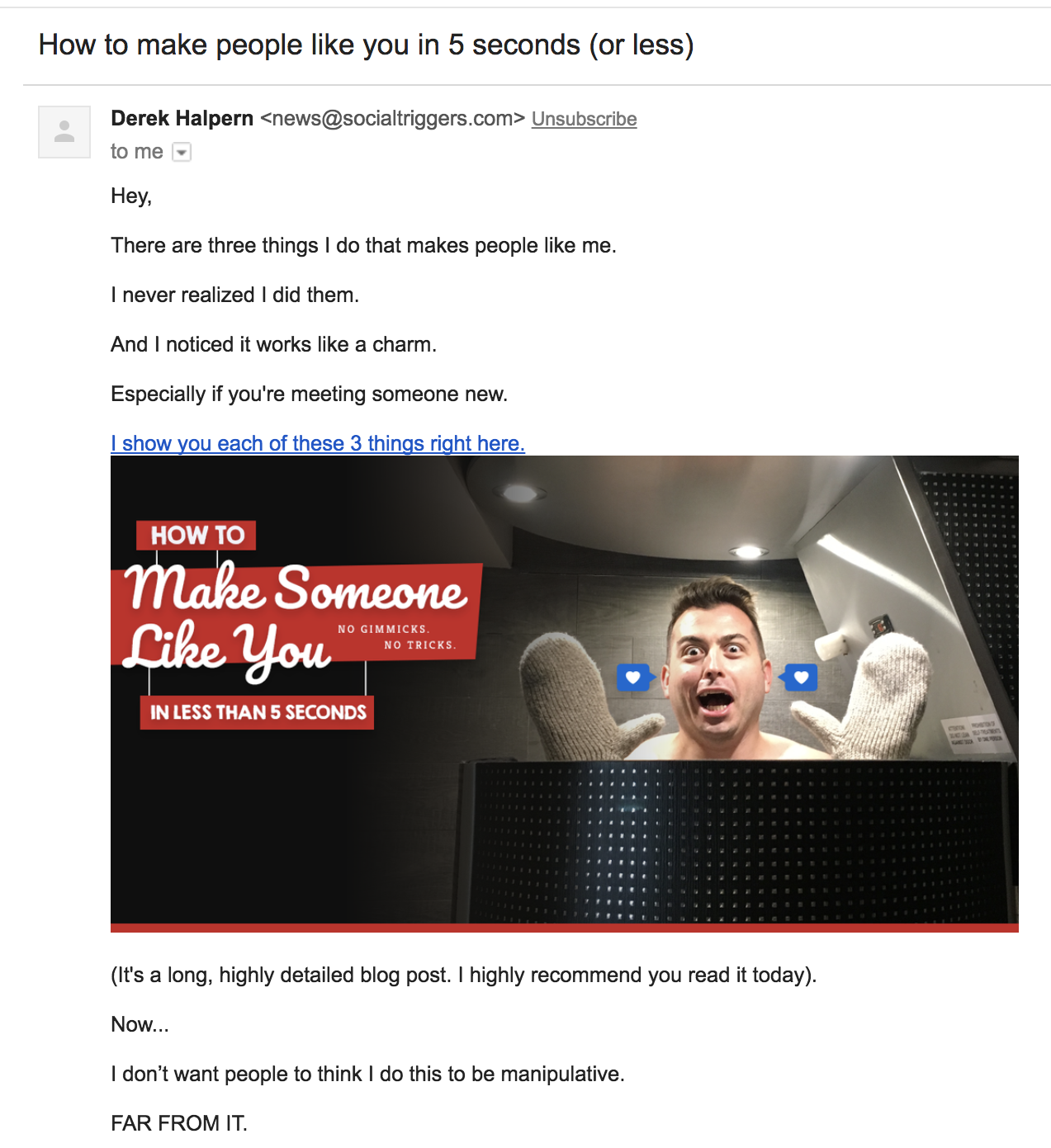 This is just a good ol’ promise headline. EVERYONE wants to be liked. It’s also specific because of the time constraint “in 5 seconds (or less)”… and it almost sounds too good to be true.

But I had no problem making this promise, because the technique I shared to make people like you actually does only take 5 seconds.

Make the right promise and make it specific. And if you can back it up, make it big and bold. 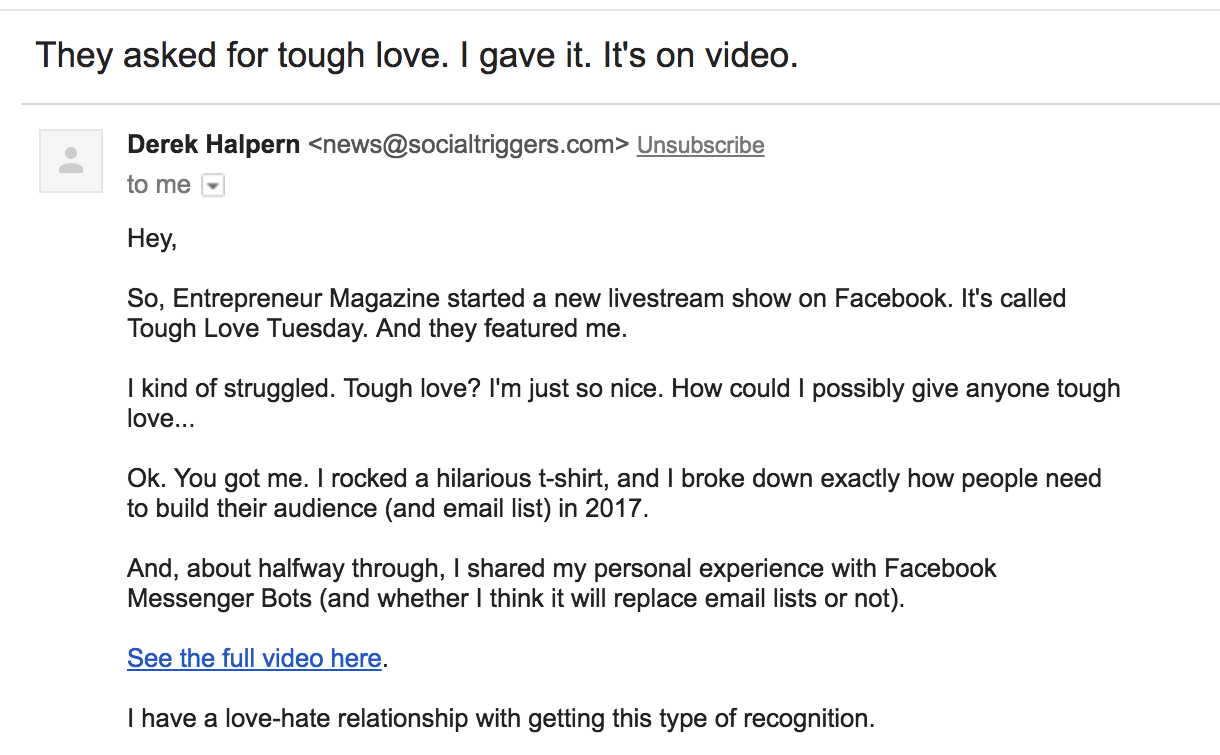 People clicked on this for the same reason they watch “Intervention.”

So, on the one hand people probably wanted to see me put someone else in their place. On the other hand, when you read this headline, you’re inevitably wondering, “Do I need to hear this?”

This email was about an interview I did with Entrepreneur Magazine. The show is called Tough Love Tuesday and you can see my vlog about it right here. 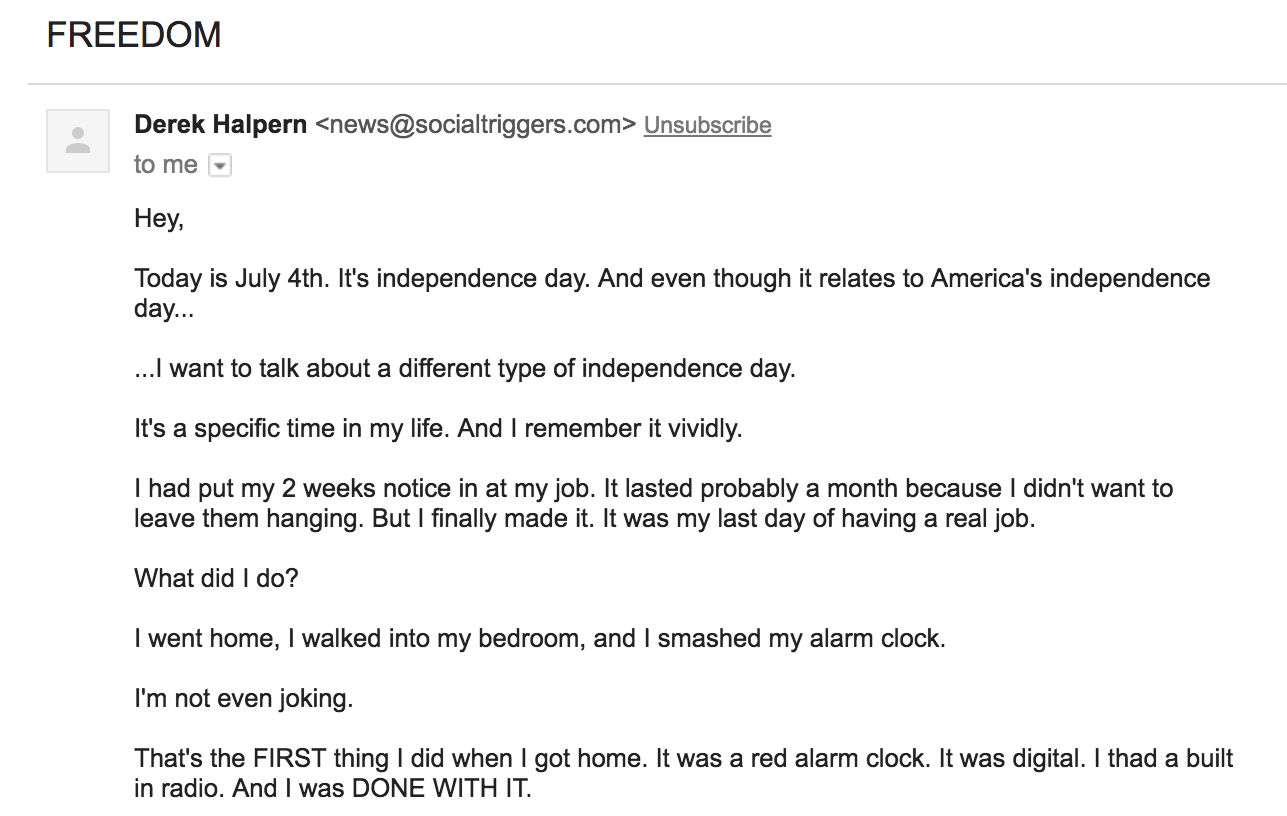 This was my 4th of July email – Independence Day.

But instead of talking about America’s independence…

I told a story about my personal “independence day:”

The day I quit my job.

It’s a proclamation. It’s a big promise. It’s what I believe everyone with an entrepreneurial spirit strives for.

The peak moment was when I SMASHED my alarm clock. I was no longer going to live on anyone else’s schedule but mine.

This email didn’t even include a link…

But it was relatable.

It also stood out. Most people mentioned July 4th or indepedence day in their headlines. I went with all capslock as a way to stand out from other emails sent that day.

And that’s the key.

When you send an email, it’s not just about what subject line you use. It’s about the subject line you believe your competitors are using and then thinking of a way to “stand out” in the inbox.

I’ve filmed a video about this before… where I essentially said this… “what blends in gets ignored… what stands out gets remembered…” Even though I was talking about colors on a website, it also applies to the inbox. If your subject line stands out it will get opened.

7. So, this was a weird conversation… 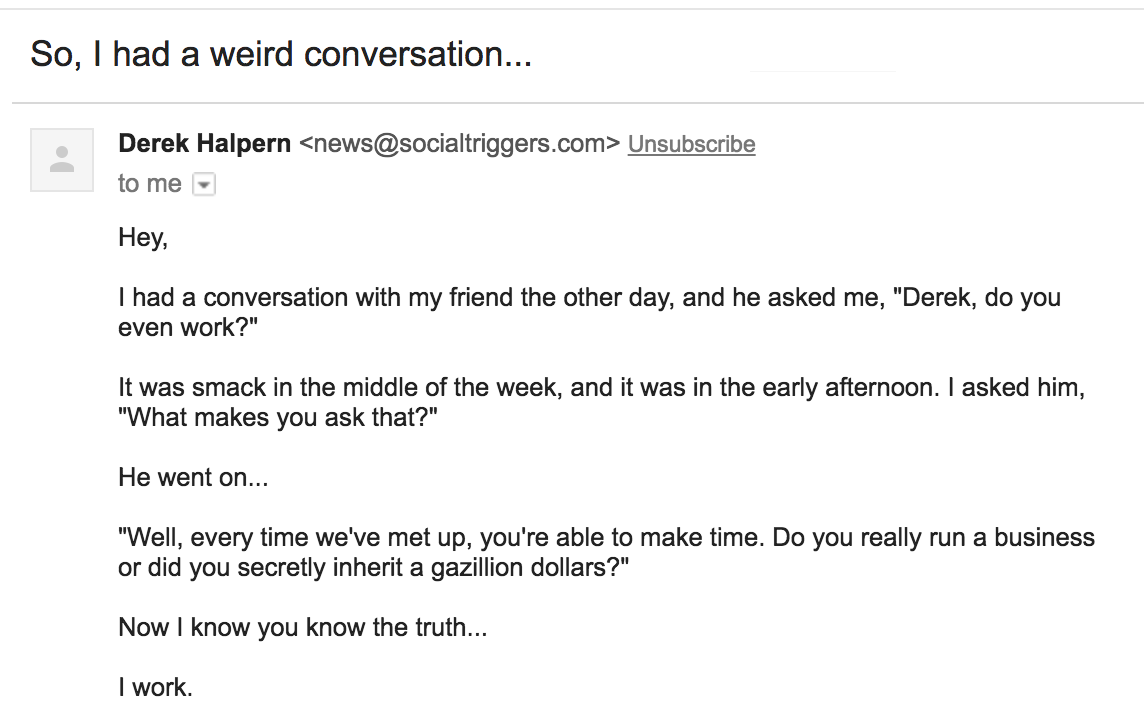 Interestingly enough, this next email was a personal story, too.

And it was also about being an entrepreneur.

They key word in the subject line is “weird.”

Just think of those spammy “1 weird trick…” ads. They work because people can’t help but click…

We’ve all had uncomfortable or awkward conversations. And we know weird means “not normal.” So naturally, we want to know what happened.

What stand out gets our attention. What blends in gets ignored.

That’s why calling something “weird” immediately gets attention, and that’s why it’s such a powerful word.

6. “Watch her rewrite her sales page – it comes out great” 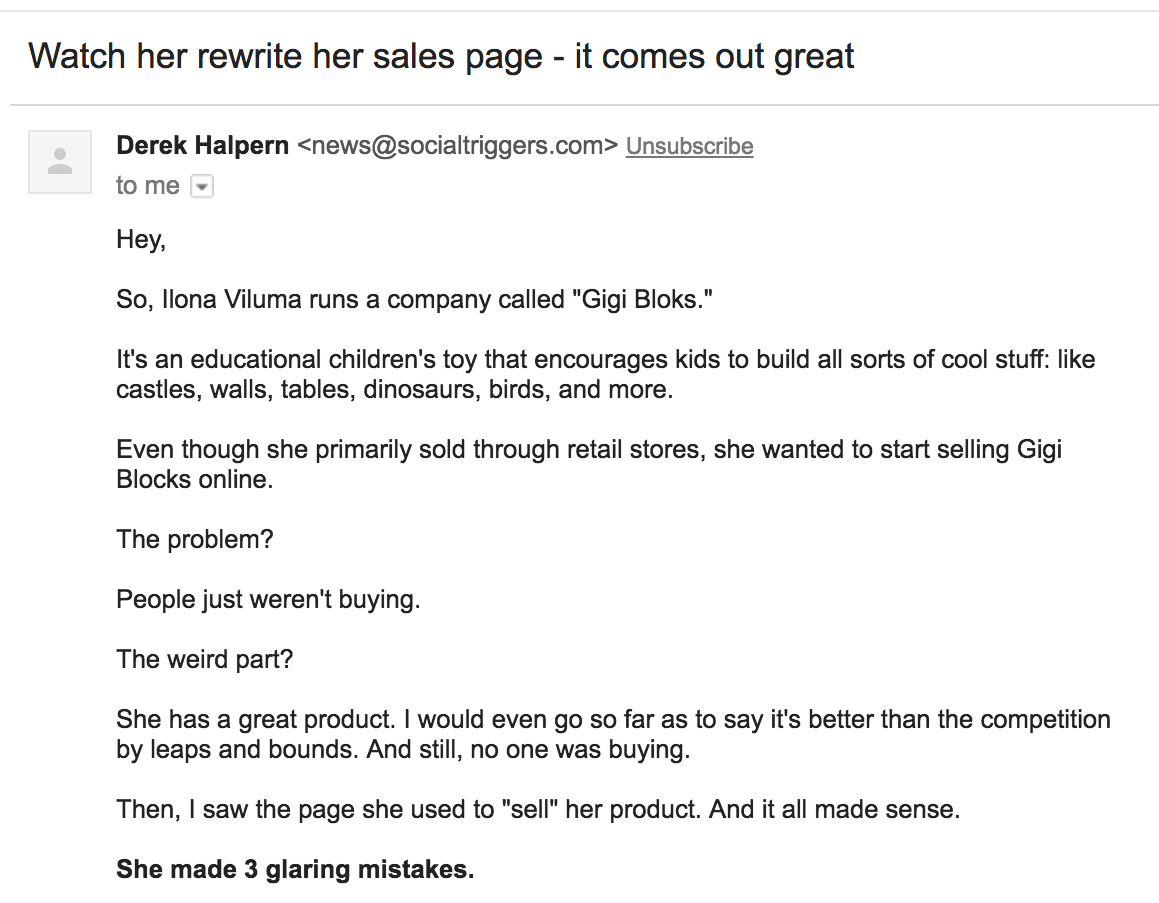 I didn’t like this subject line when I wrote it…

I was surprised it did so well.

This email was about a case study on writing an e-commerce sales page.

Why did people want to read this?

Case studies are popular because we want to see what worked for someone else… and if it can work for us.

It’s also something people actively think about in my market. They want to see “before and after” pictures of sales pages… so I gave them exactly what they wanted.

5. This is unlike anything I ever wrote (it’s about fitness)

This was the email I sent when I launched a fitness coaching group with my trainer Chris earlier this year.

Anything that’s weird or unusual is going to get attention (see email 7 above).

I usually write about marketing and sales. The novelty of me writing about fitness is what made people curious here.

I was able to say “unlike anything I ever wrote” because it was true: I never wrote about my fitness journey before.

I suggest you only call something “extraordinary” if it really IS outside of the ordinary!

4. Stop being cheap. Seriously. (not you. everyone else) 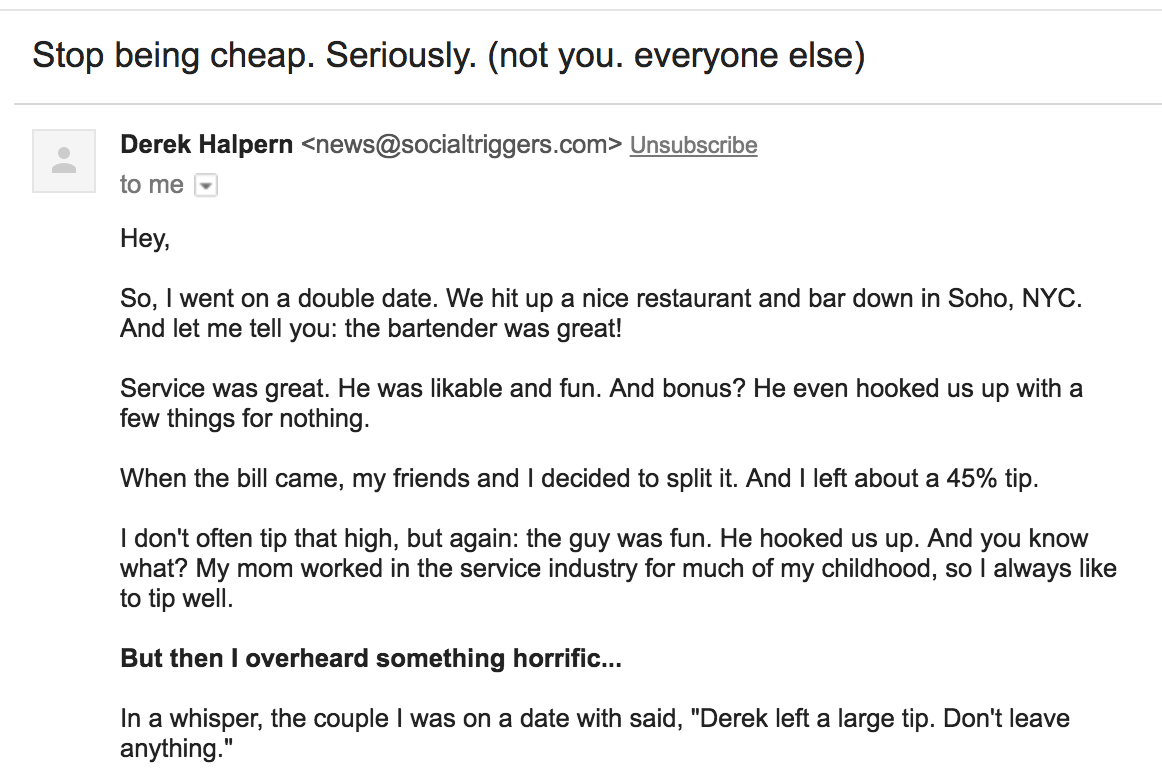 This is what you call a proclamation headline.

It’s a big, bold statement. An assertion… a proclamation!

Who likes to be called cheap? Most people don’t… And insulting your readers is generally a bad idea.

Why? Because when you insult someone, their immediate reaction will be to get defensive.

They won’t even listen to what you say next. Now they’re in “I’m right, you’re wrong” mode. So they’ll dismiss whatever you say.

But when you’re in the business of helping people improve their business and life, like me, that’s NOT what you want…

Look at the video on YouTube. Look how many comments. People truly resonated with this. 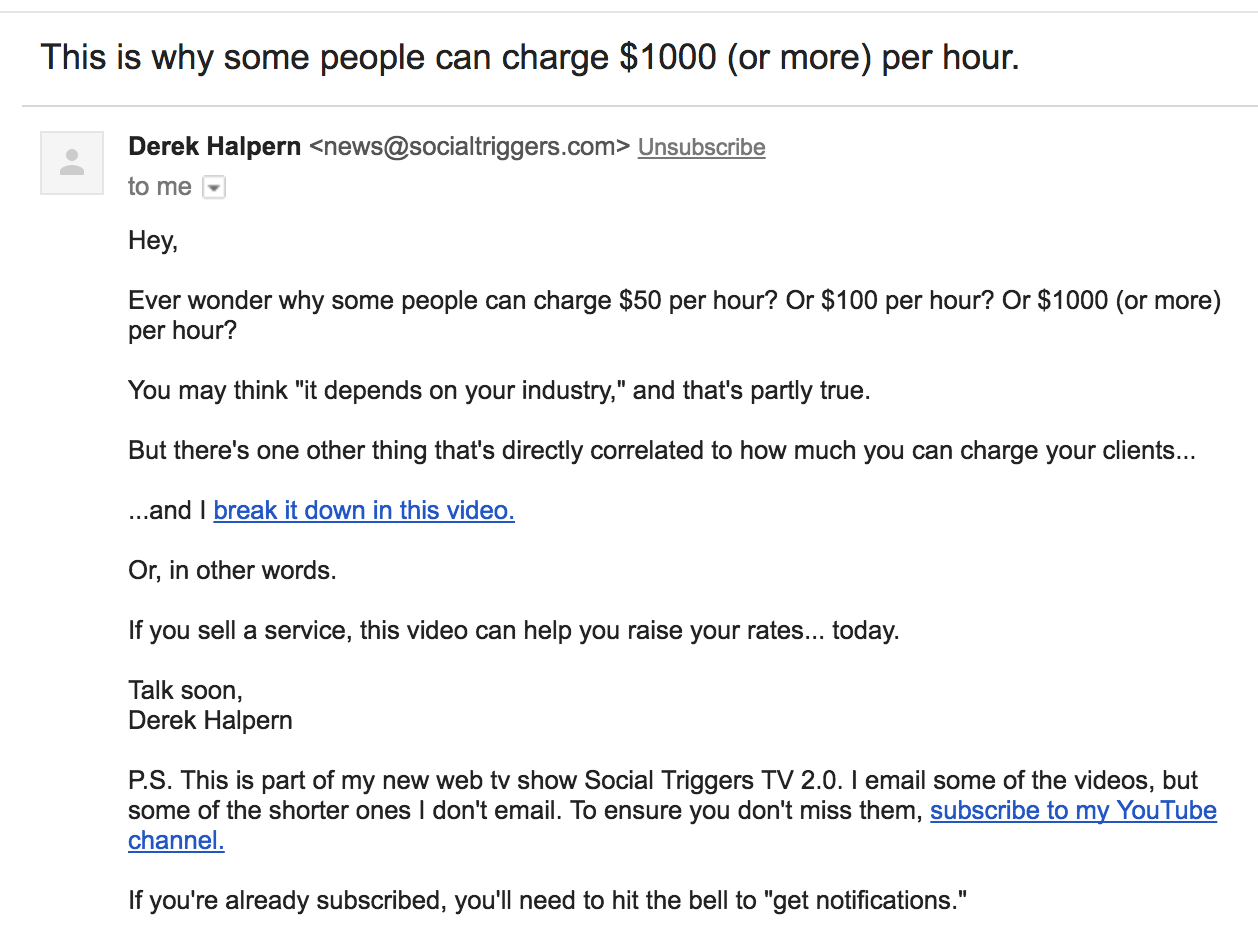 EVERYBODY wants to make more. And the subject line taps into this universal desire with a simple promise: I’ll explain why some people can charge more.

Of course, the implication is… If there are *some* people that can charge a lot more, there are *others* that can’t and don’t know why!

What everybody then wants to know is:

“How can I become one of those people who can charge more?”

So, in the video I reveal #1 secret to charging more.

You can use the “some… while others…” formula, too. With the right promise, the formula creates a slight feeling of envy. Enough to make people want to read on.

This is also good reminder not to overcomplicate things when it comes to subject lines. Don’t try to be too clever…

With the right promise and a little bit of intrigue, people will open and read your messages.

One note: Another reason why this did so well is because people often find themselves comparing themselves to other people… and that’s baked right into the headline. I suggest you read the comments on this YouTube video too.

2. I got into a fight with my video guy over honesty 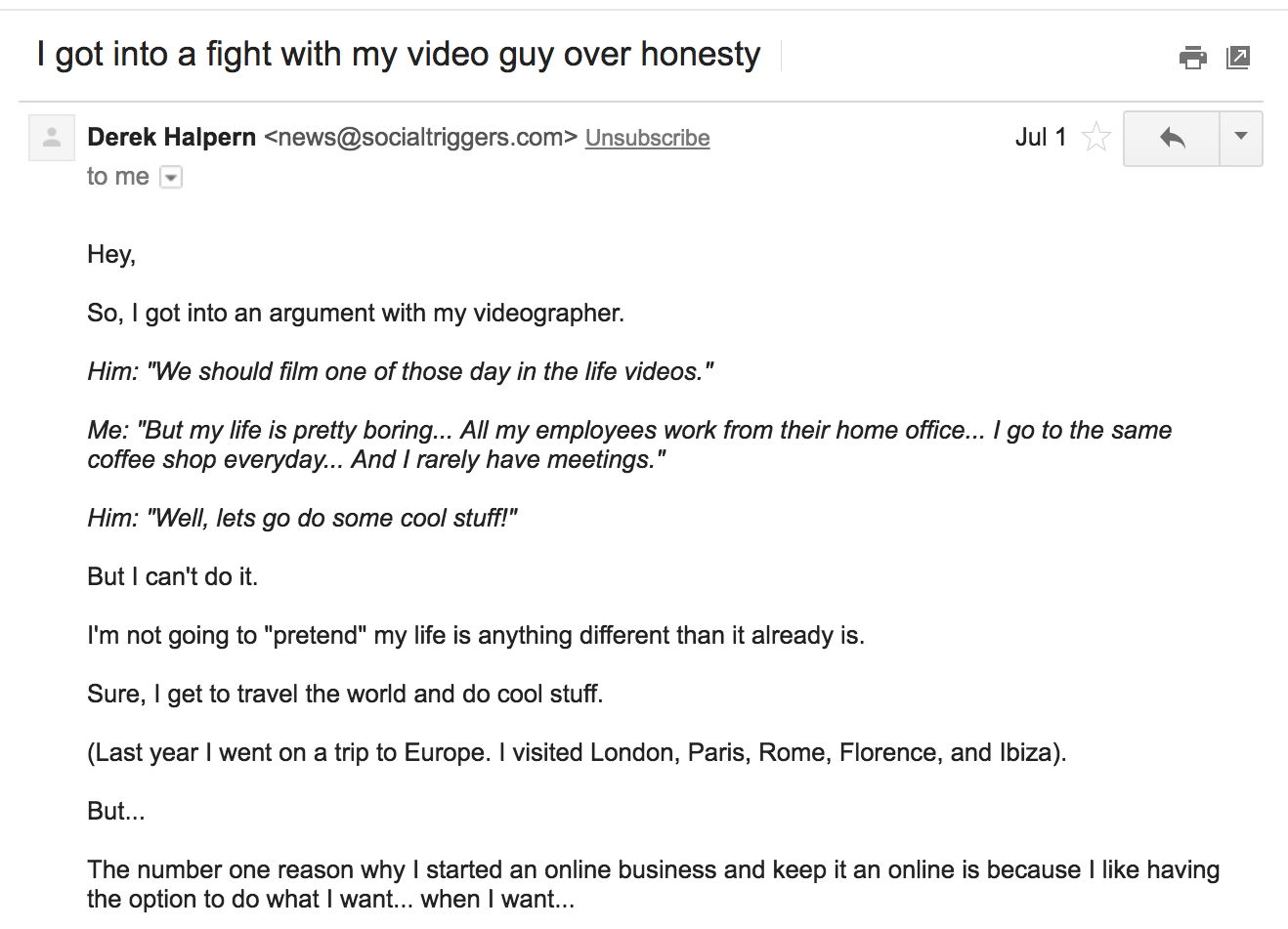 When you see couple argue on the street, what do you do?

You stop and look.

That’s the power of controversy.

Why do I read pages of YouTube comments of people arguing about dumb sh*t? Again, that’s the power of controversy. We get to pick a side. As long as nobody gets hurt, it’s entertaining.

This is probably the main reason people wanted to read this email… “I got into a fight with my video guy”… because they got to pick a side.

All good subject lines open an Information Gap. But this one shows it perfectly…

An Information Gap is when there’s a gap between what we know and what we WANT to know. This is the driving force behind all curiosity driven headlines.

So what’s the gap here? Most of my readers run online businesses. OF COURSE they want to know which page on my website is the most valuable!

Combined with the “rule of 1,” this email performed extraordinarily well.

If I had to put it in a formula…

There you have it…

If you liked this article, do me a favor and share it with a friend or colleague.

And, one more thing…

Right now, I’m looking to do two things over at Social Triggers.

#1. We are revitalizing the Social Triggers YouTube channel. If you haven’t had a chance to check it out, I highly suggest you subscribe today.

We are sharing more behind the scenes content of running an online business and I think you’ll dig it.

Here’s the link to check it out.