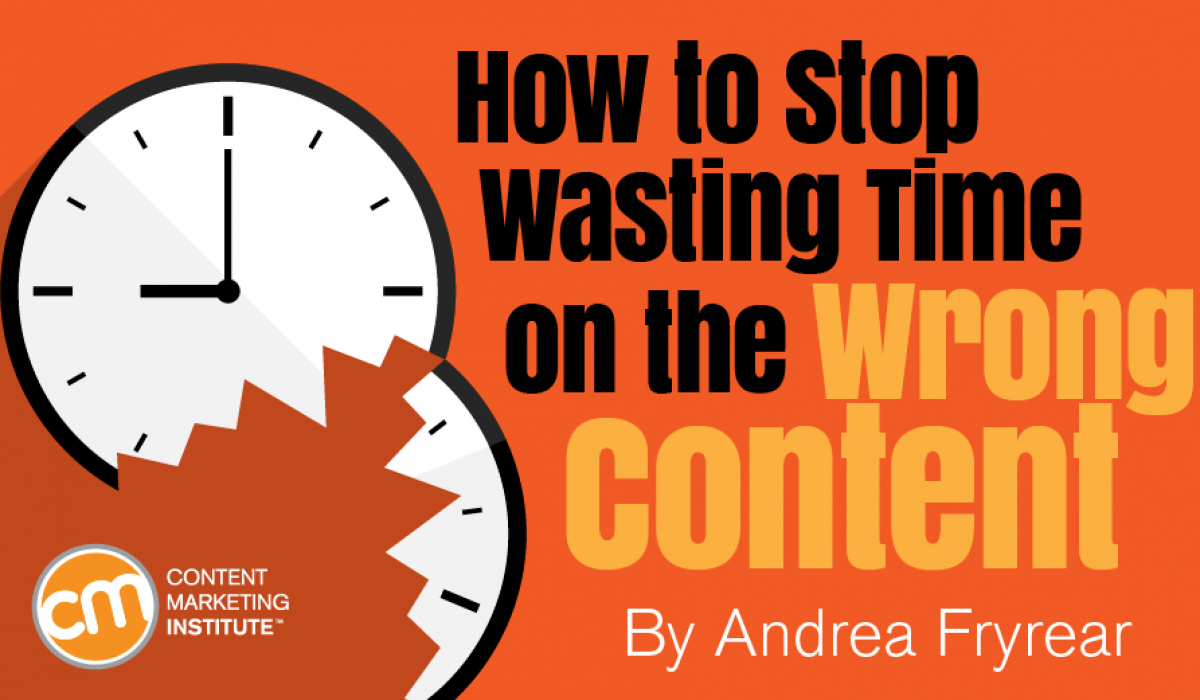 Have you ever spent weeks or even months crafting a perfect piece of content that generated almost no response from your audience? You expected trumpets and confetti, praise-filled emails, maybe even a raise. Instead, you got crickets.

While you might accept these disheartening flops as the cost of doing content marketing, they represent an enormous waste of time and resources.

Fortunately, Agile practices offer an alternative. Rather than putting all your eggs into one big content basket, you can conduct small experiments by releasing minimum viable content. I’ll define this term in a bit. For now, the main thing to note is that minimum viable content enables you to learn what your audience is interested in and then use what you’ve learned to create big, high-effort pieces that perform well.

Back in the days when we all came to work in horse-drawn carriages, marketing departments would draw up huge marketing plans. These detailed maps spanning dozens of pages (or stone tablets) charted the team’s path for the next year or so. During that time, everyone in marketing would work to release one or two enormous campaigns. All hopes were pinned on the success of these large bets.

If those campaigns failed, all that planning and work was wasted. And someone got fired.

To avoid that type of waste, Agile principles call for us to conduct many small experiments. For content marketers, that means we must test several small, low-risk pieces of content, see which ones perform best, and expand only on the most successful. This approach eliminates wasted effort and increases the chances that each piece of content we deliver will wow our audience.

Those small bets take the form of minimum viable content.

To this first bullet, minimum viable content brings about a specific behavior change for specific people engaged in specific activities. In this case, the content is aimed at a particular persona, and it has a defined goal: to influence the behavior of people who consume it. This definition is most closely aligned with Agile principles that value small bets and regular releases.

Example of a minimum viable product: A car

Before we apply this idea to content, let’s consider how you might deliver a minimum viable product. Let’s say your team believes that the customer base wants a car. You hypothesize that by producing a particular output (the car), you will have a particular outcome (the target audience is happy and wants the car), which will result in a business impact in the form of revenue (people buy the car).

Your team, however, doesn’t understand how to deliver a minimum viable product. You’ve broken up the release of the car into four stages, or iterations, which will be delivered one at a time. Iterations one, two, and three give you no insights into what customers want. How NOT to deliver a minimum viable product

In iteration one, you produce a wheel. If customers are hoping for a vehicle, they’re going to be disappointed, as illustrated by the frowny face. In iteration two – two wheels on an axle – you still don’t have a minimum viable product; two wheels in isolation don’t help people who are looking for a way to get from place to place. Customers aren’t going to buy this pair of wheels. Iteration three, which lacks a mechanism for steering, continues to leave people unhappy and unwilling to buy.

Iterations one, two, and three are not viable products.

Iteration four finally provides a complete vehicle. Until this point, nobody has wanted anything to do with your output. You haven’t had any results to observe and learn from. What if your hypothesis was wrong, and the audience really wanted a boat, not a car? You would have wasted tons of time and resources creating a car, falsely expecting to make people happy and to have them shower your company with money. And you would have learned nothing.

If you only deliver a final product, you haven’t had results to learn from smaller iterations @AndreaFryrear Click To Tweet

A more helpful approach would look something like this (with MVP standing for minimum viable product): How to deliver a minimum viable product

Here, we simultaneously learn from and (to some extent) help our audience with each iteration. This is the right way to manage a minimum-viable approach.

The hypothesis is the same, but the approach is different. While iteration one doesn’t delight the customer, the output – a skateboard – gives people a way to get around. Iteration two produces a scooter, which gets closer to what people want.

As you move toward a true minimum viable product in iterations three and four, you get positive responses. People are changing their behavior, taking bicycles and motorcycles to work. Your minimal products are becoming viable in the market. You see business results as you sell more and more of these products.

In this example, if your customers had wanted a boat, you would have found out early if your hypothesis was wrong. Feedback on the skateboard or scooter would have told you instantly that you were on the wrong track.

How do you apply this idea to content marketing processes? Let’s suppose that you work for a car dealership, and you want to deliver The Ultimate Guide to Car Buying, an interactive online destination full of checklists, videos, step-by-step guides, and beautiful custom graphics.

You might spend three months planning the project, six months creating it, and three more months desperately promoting it. If we’re following the car analogy, you’ve jumped to the fully built car – pushing the final big deliverable to customers without getting feedback along the way. It might work or it might not. Either way you’ve made a big bet.

Instead, you could take the minimum-viable-content approach, testing and refining your idea so you can be confident of that big piece’s success by the time you release it rather than sinking a year’s time and budget into it with your fingers crossed. Your hypothesis is that producing a particular output, The Ultimate Guide to Car Buying, will make it easier for the audience to navigate car buying. The outcome you expect is a love for the content, evidenced by various engagement metrics, and you expect that love to produce a positive impact on your company’s revenue by increasing car sales.

In iteration one, if you send out a tweet about the ultimate guide to see if anybody engages – without any ultimate guide to link to – you can’t learn anything. The same thing goes for writing a short listicle (iteration two), and creating a landing page that collects email addresses and tells subscribers the guide isn’t yet available (iteration three).

Iterations one, two, and three might all be components of your final promotional push for The Ultimate Guide, but they aren’t viable content; they provide no value on their own.

As in the car example, it’s not until you’ve delivered the final deliverable that you know whether the audience wanted it. Maybe people would have preferred a mobile app to use while walking around a car lot during the shopping process, in which case the desktop-based interactive guide doesn’t help them. Since you gave people no minimum viable content to engage with along the way, you had no way to find out what they wanted, so you couldn’t correct your course.

How much better to learn from each release, as shown here: Instead of starting with a tweet to nowhere, as in the how-not-to example, you might mention the guide in an email and link to a landing page where people could sign up to receive the guide when it’s done. If a solid percentage of the email list clicks through the email and fills out the form, that’s a measurable outcome signaling that you’re on the right track. Then you could move on – with confidence – to creating a car-buying checklist.

If you want to test, learn, and adapt quickly, you can put some money behind that checklist so that it gets in front of a large audience in a short time. Otherwise, you’ll have to wait until several hundred people arrive on the page on their own. Either way, metrics like time on page, social media shares, and comments will help you evaluate the success of the checklist. In this case, success means you validate your hypothesis that users will find an ultimate guide useful enough to alter their car-buying behavior based on the guide’s recommendations.

If successful, that checklist could then be expanded into a longer, more comprehensive blog post, which could in turn become an informative video. Somewhere in these middle iterations – at whatever point the audience sees these early content pieces as substantial enough to have value on their own – you’ve crossed into minimum viable content.

Based on the response to your minimum viable content, you can determine whether you’re justified in creating The Ultimate Guide to Car Buying. If you decide to complete the expansion of your content into this large-scale piece, you’ll know that it has a solid chance of success based on what you learned from your previous content releases.

HANDPICKED RELATED CONTENT:
Why – and How – to Map Out Your Customers’ Journeys [Template]

You don’t have to be on an Agile marketing team to create minimum viable content. You could easily release small, learning-driven pieces in any process. This approach does work especially well with Agile marketing methods, however. Using scrum, Kanban, or any other Agile methodology enables you to release minimum viable content regularly, review its performance, and adapt your content quickly.

Whether or not you’re using Agile methods, try minimum viable content to reduce your chances of hearing crickets in response to your next major content release.

Sign up for our weekly Content Strategy for Marketers e-newsletter, which features exclusive stories and insights from CMI Chief Content Adviser Robert Rose. If you’re like many other marketers we meet, you’ll come to look forward to reading his thoughts every Saturday.