Facebook copped a barrage of criticism back in 2014 when they split messaging into a separate app. But in retrospect, the move is seen a stroke of genius – Messenger has more than 1.3 billion users in its own right, and messaging use is on the rise, with more total users on the top four messaging apps than the top four social platforms.

And now, Facebook may be on the verge of doing it again, with The Verge reporting that The Social Network is developing a standalone app for Instagram DMs, which would replace your Instagram inbox.

Called simply ‘Direct’, the new app’s being rolled out on Android and iOS today in six countries – Chile, Israel, Italy, Portugal, Turkey, and Uruguay. There are no official plans for a wider rollout as yet, but given the Messenger template, it would be little surprise to see your Instagram DMs moved entirely to Direct sometime in future (once you install Direct, your Instagram inbox disappears from the main app).

Here’s how it works: Direct, in its initial iteration at least, seems to be another shot at Snapchat. When you open Direct, the camera is the first thing you’ll see, just as it is in Snap Inc.’s flagship app. Swipe left and you’ll see a profile screen, where you can access your settings, swipe right and you’ll go to your messages inbox. It’s basically Snapchat re-arranged, and minus Discover – which is your regular Instagram feed.

That’s all there is to it, though The Verge does note that the app also includes a smooth transition feature which enables you to shift back and forth between the main Instagram app and Direct.

“If you start swiping to the right of the Direct inbox, an Instagram logo pops begins to peak out from the side of the app. Swipe all the way to the right and Direct will open Instagram. Similarly, you can swipe right in Instagram to reveal the Direct logo — a modified version of the paper-plane logo Instagram has long used for messages — and completing your swipe will take you back to Direct.”

That shifting is likely more geared towards higher end phones, and may not work as well on older devices. But still, Instagram’s clearly focused on providing a separate messaging space, where you can keep your private interactions separate from your main Instagram feed.

Why is that important? As noted, the growth in messaging cannot be denied, with more and more users spending more time in messaging apps. 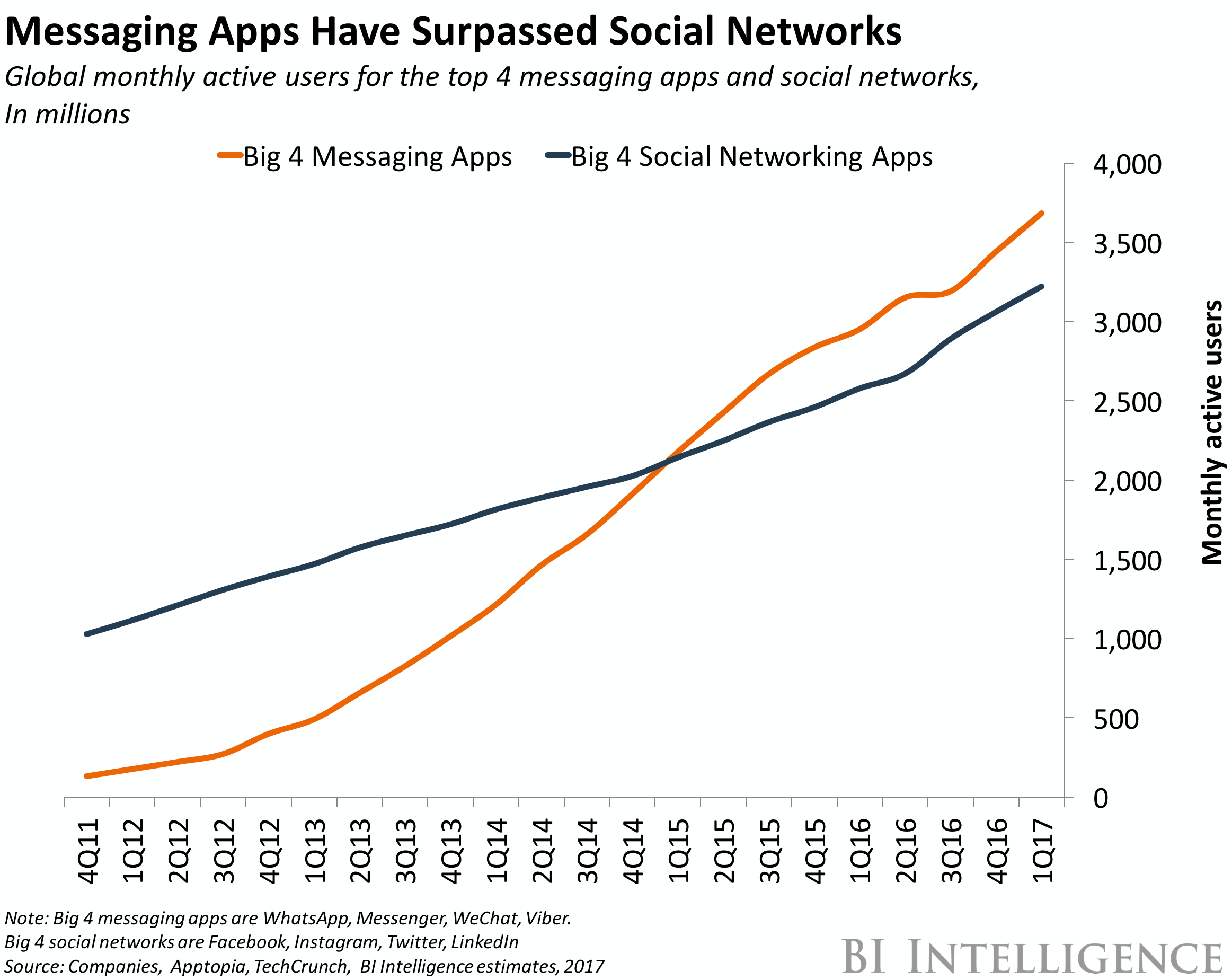 As you can see, social media usage is also rising, but messaging has surpassed it, and is becoming a bigger consideration.

There could be various reasons why that’s the case – people being more wary of what they share in public (on social apps), controversy around fake news and how information is being shared and distributed, backlash against potentially controversial opinions. But most importantly, it would appear that the messaging trend is particularly strong amongst younger users, the future of each platform – Snapchat’s obviously the key example, with the growth of the app raising concerns at Facebook HQ that they could lose touch with the next generation.

That’s why Facebook’s put so much effort into curbing Snapchat’s growth, why they’ve introduced a new Messenger Kids app aimed at younger users. It could also be why they’re experimenting with a new News Feed which would split updates from people and Pages into two separate streams. Personal interaction is what keeps people coming back, what they need to maintain engagement. In this sense, splitting Instagram messages into a separate app is essentially Facebook hedging its bets.

On Instagram specifically, messaging use has also been on the rise – back in April, Instagram reported that they’d seen a significant jump in messaging activity:

“Since our last update in November 2016, the number of people using Direct has grown from 300 million to 375 million.”

That’s almost half of their 800 million userbase – and that was in April, before Instagram announced a range of new messaging features, including links in DMs, merging disappearing and permanent messages into one inbox, the ability to share Stories via message and new message reply options, including the recently expanded Remix tool (which enables you to reply with a virtual sticker of a received message). It seems fairly safe to assume that messaging has grown on Instagram since then, making it a prime opportunity for Facebook to capitalize on the option’s unique value, in difference from the main Instagram feed, and expand their product suite.

From a marketing standpoint, it’s hard to say how, exactly, the arrival of Instagram Direct might have an impact. As noted, messaging, in general, is on the rise, and all businesses should be considering their options on this front, as social seems to be shifting away from public broadcasting and more towards private, personal conversations.

The businesses that are able to tap into this trend stand to win out – but of course, stepping into private conversations, without being intrusive, is a delicate balance, and many will slip up.

The potential arrival of Instagram Direct further compounds this, giving businesses another way to connect on a more personal level, but also, another way to turn people off if they get too pushy.

In a broader sense, the shift towards business interactions in other apps, like Facebook Messenger, would better enable brands to connect with consumers within tools like Instagram Direct, as they’ll become more accustomed to conducting such exchanges via message. It could also expand the opportunities for bots and bot interaction, enabling brands to be ‘always on’ – but Messenger business hasn’t quite taken off yet. The commercial opportunities of both options may be intertwined.

That said, there’s clearly rising value in more personal interactions, and there will be ways for brands to further build community via more direct, private communications. It’ll just take a different approach, a different way of thinking when planning out your social strategy. The addition of Instagram Direct would add to this, but messaging and direct connection is already important. Direct would simple add another variable.

But it does further underline the value of messaging, and the wider trend among social networks.

As always, the only constant in social media is ‘change’. Expect a lot more discussion around this shift in 2018.