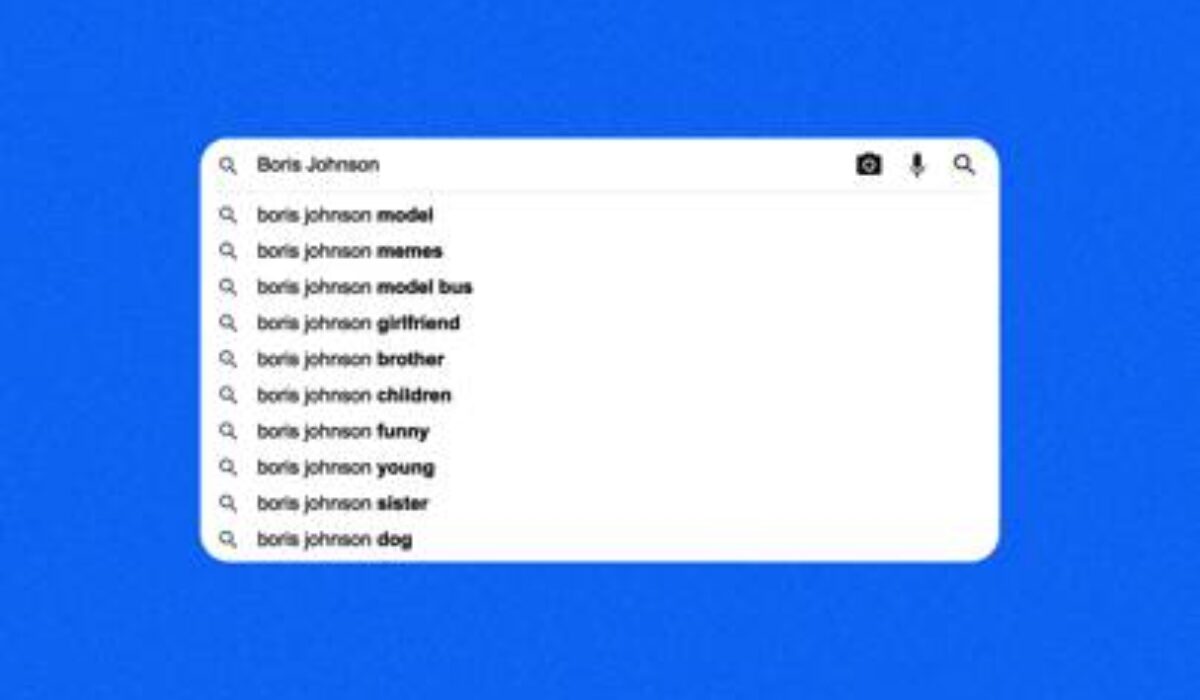 It has been a curious few months in politics, but one of the strangest theories being whispered on social media and in Westminster involves Boris Johnson’s increasingly odd proclamations.

In June, the prime minister admitted he paints old wine boxes into buses. In July, he brandished a kipper to incorrectly claim that EU rules were stifling the fishing industry. In September, he spoke in front of the police. And this week, he’s claimed he’s the “model of restraint” in the face of allegations he is using violent language to turn public opinion against opponents of Brexit.

One theory is that Johnson is trying to downplay negative news coverage of events by seeding news stories into Google search results by using similar phrases and key terms that are more positive. For instance – the hypothesis goes – by saying he was the “model of restraint”, Johnson was attempting to divert attention from stories detailing his alleged affair with former model Jennifer Arcuri, which became less visible in search results for “Boris Johnson model”.

His speech in front of the police was meant to distract from reports that the police were called to the flat he shared with girlfriend Carrie Symonds following an alleged domestic dispute, while the kipper incident was meant to downplay connections with UKIP (whose supporters are called kippers). The claim about painting buses, finally, was supposedly intended to reframe search results about the contentious claim that the UK sends £350 million to Europe branded on the side of the Brexit campaign bus.

“It’s a really simple way of thinking about it, but at the end of the day it’s what a lot of SEO experts want to achieve,” says Jess Melia of Parallax, a Leeds-based company that identified the theory with Johnson’s claim to paint model buses.

“With the amount of press he’s got going on around him, it’s not beyond the realm of possibility that someone on his team is saying: ‘Just go and talk about something else and this is the word I want you to use’,” says Melia.

According to data gathered by Parallax, a Sky News story on Johnson’s claims to be the “model of restraint” had already risen to the third-most popular result for “Boris Johnson model” by 1:30pm on September 30. (He first made the comments on September 29). The marketing executive is undecided whether it’s a deliberate communications strategy. “Whether or not he’s doing it I can’t say,” she says. “But it is possible.”

Others are more sceptical. “It’s a very interesting part of the internet folklore, but I would be far away from saying he’s going to manipulate search by saying some ridiculous things,” says London-based SEO consultant Lukasz Zelezny. “It’s very unexpected, even from Boris Johnson, but manipulating Google search engine results by saying some ridiculous things is not easily done.” Google search results are far more complex than simply matching up keywords with news stories, he says.

READ ALSO  How to Use Social Media to Stay in Touch Before, During, and After a Disaster

Jayne Rodgers, a lecturer at Teesside University who has analysed Google’s search algorithm, agrees. “There may well be some assumption that you can use phrases in different contexts that are going to influence what happens in Google searches, but that’s one facet of what Google search algorithm looks at. You’d have to work a lot harder behind the scenes to make that really effective.”

“What we search for influences what we find,” says Rodgers. “Not all search results are the same. That front page of Google, depending on what I’ve searched for in the past. It’s very hard to game that organic search.”

People would soon find out about it, talk about it on social media and write about it, and then resurface the original negative terms Johnson’s team were trying to quell. “All this talk [about Johnson’s gaming of the system] on Twitter has a self-propelling snowball effect,” says Zelezny.

And searches for many of the terms – including “Boris Johnson bus” – still show images of the controversial Brexit campaign bus, the result of images being tagged with the term and no new ones to replace them.

“Even if it was a deliberate approach, it’s unlikely to work in the long run because all that other [negative] content is still there, and unless you take all those other factors [such as personalised searches and tagged images] into account, you’re only going to get partial results,” says Rodgers. “You might make a slight difference in the short term, but in the long term it’s not going to make a massive difference.”

The ability to manipulate Google search results has become more difficult as the search engine has become more nuanced in how it presents results, says Zelezny. Google is constantly tweaking its search algorithms and the factors that dictate which news articles and websites will be most prominently displayed. The company does not provide detailed breakdowns of how its search results are processed.

“Manipulation is much harder because Google knows there are people trying to manipulate it and it’s a threat to the quality of results,” Zelezny explains. “People will go to other search engines if they get bad ones.”

However, there have been precedents of politicians taking over key phrases in search terms. Search for “completely wrong” on Google Image Search in 2012 and you’d be presented with images of Mitt Romney, after he used the phrase in a much-publicised apology for saying 47 per cent of Americans saw themselves as victims.

On a more fundamental level, Johnson seemingly doesn’t have to worry about the presence of negative headlines. Although 43 per cent of people believe Johnson “probably acted improperly” by not declaring his connection to Arcuri, and only 22 per cent believe he’s honest, the Conservatives are still the most popular party in the polls.

“He’s not really concerned about the personal stories that have been around for some time about him,” explains Delia Dumitrescu, a lecturer in media and cultural politics at the University of East Anglia. “He’s actually banking on the fact that this isn’t going to touch him.”

As for his odd obsession over buses, that too is part of the everyman persona he’s trying to craft. “He’s trying to tell his supporters he’s also approachable,” says Dumitrescu. “I think he has succeeded to some extent. His background is elitist. He’s not like most people. He’s very unique. He hasn’t known poverty. But he just wants to give this image of himself as being one of the regular guys, a bit weird but likeable, very likeable.”

🔓 The iOS 13 privacy settings you should change right now

🔋 Tesla has created a battery that could last one million miles

📧 Get the best tech deals and gadget news in your inbox

Get WIRED Weekender, your at-a-glance roundup of the most important, interesting and unusual stories from the past week. In your inbox every Saturday by 10am.

Thank You. You have successfully subscribed to our newsletter. You will hear from us shortly.

Sorry, you have entered an invalid email. Please refresh and try again.