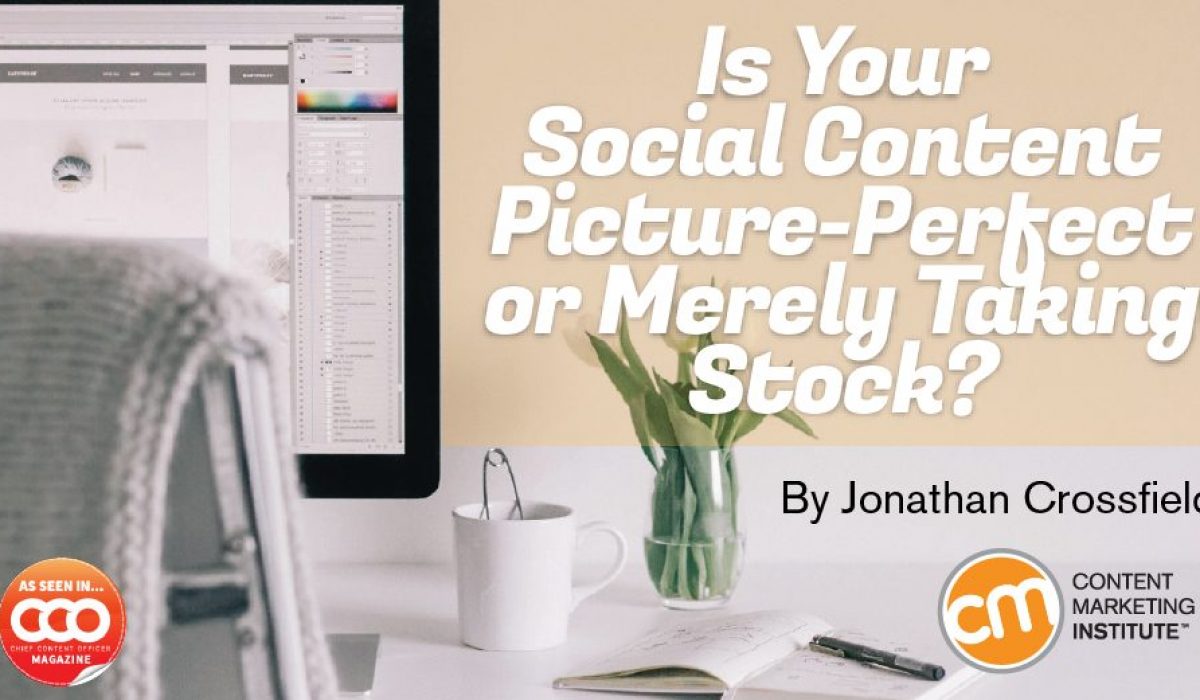 Attention span in social media can be measured in split seconds, not minutes. While your update hopes to entice me to click or interact with your content, there are hundreds of other posts right below yours also crying for my attention. And should your choice of eye-catching image cause me to pause for a moment, my finger is constantly resting on the screen, waiting to flick-scroll your content up the feed and off my screen with the tiniest of well-practiced muscle reflexes.

Here’s the bad news: This fleeting first impression may be the only opportunity many people have to discover your content. And if you waste that opportunity, it won’t matter how well researched, brain meltingly creative, and all-round wonderful your content might be because we’ll never know.

Sure, you can’t judge a book by its cover but, in a crowded bookstore, covers help us find those books that we might enjoy while skipping over the thousands of others we haven’t the time to “judge” by reading. Similarly, when our social media feeds are choked with content links begging for attention, you better hope your choice of image causes people to stop and take notice.

Out of the picture?

I’m scrolling through my Twitter feed – merrily hitting the heart symbol on tweets that make me chuckle and clicking on the occasional link – when I spot the same image attached to two almost consecutive tweets originally posted only five minutes apart. Two people inadvertently used the same generic stock image to promote two very different blog posts – one a comparison of blogging platforms and the other a listicle of content marketing tips.

Within the context of each post, the generic stock photo of hands typing on a keyboard tells two different stories – is the person installing plugins to WordPress or writing great marketing content? Sure, these topics overlap so it could be both, but it could be neither. The same image could also make sense in an article about bookkeeping, desktop gaming, or online shopping.

The unspecific nature of such stock images means that they can’t stand alone – they need context because they have virtually none of their own. The image only matches the content when placed within or alongside it. Put the same image in a different context and the message it contains (such as it is) changes.

And when shared to social, the context provided by the article becomes far less obvious at a glance – which is all most people will see as they scroll through their feeds. Suddenly that stock image risks being no more distinctive than a black T-shirt at a heavy metal concert.

A stock image risks being no more distinctive than a black T-shirt at a heavy metal concert, says @Kimota. Click To Tweet

How do so many brands and marketers expect their audiences to take particular notice of their updates when they look just as bland, predictable, and uninteresting as all of the other updates they just scrolled past?

Anyone arguing for the importance of images in content, social, or just about anywhere is almost certain to quote the hoary old chestnut that our brains process images 60,000 times faster than text. A big, brash stat like that would make just about any argument a slam dunk. So it’s rather unfortunate that it may be *gasp* fake news, as though many have tried, no one has ever tracked down the original source for this claim. Big claims need big evidence, and a source can’t be just another blog post quoting the same stat – so can everyone please just knock it off with the unsourced and/or misquoted stats? Thanks.

READ ALSO  How can a good social media strategy help you optimize your brand website for the leading search engines? – Irish Tech News

What isn’t in dispute, however, is that we consume visual information far faster than text-based information. I just don’t have a sexy stat for you. After all, we use the same visual system to see the world – or look at an image – as we do to read text, but the brain still has to do additional work to turn those letters on the page or screen into language and meaning.

Say I show you an image of a tiger leaping at a man holding a gun in the middle of a jungle clearing. Your brain would see all of that information (and more) simultaneously, taking in the thrilling scene almost instantaneously. Yet it takes a few seconds to read, understand, and visualize the same scene based on the previous sentence.

Unfortunately, while the power of images is well known, the process of selecting and attaching them is too often an afterthought. I’ve been involved in more than one content project or website where image selection was routinely treated as an inconvenience – a final step to be completed begrudgingly just before the article is published. The content may have taken weeks of dedicated research and creativity to produce, but the first thing most of the potential audience will see is a hurriedly chosen image, selected by overworked marketing assistants who may not have even had time to read the final piece.

It’s not the marketing assistants’ fault. They’re following the agreed process or workflow, forced to do in five minutes what no one else chose to consider. They don’t even have time to get lost in page after page of stock photo hell, so end up settling for the first image that vaguely matches the topic. This one of a keyboard with the letters rearranged to spell out “creativity” will (ironically) just have to do, because there are 50 million other tasks needing urgent attention if the ravenous content beast is to be constantly sated.

As a result, the benefits are undermined by the use of images too abstract or generic to convey the topic or relevance of the content, which is why they fail to capture enough of the potential audience’s attention.

What is that person typing on a keyboard? Why do those shiny business people look so happy in their shiny boardroom? How are those abstract icons and buzzwords floating in a cloud supposed to relate to me?

If you’re going to take up valuable real estate in someone’s feed with images, use that space wisely and make them as informative and as relevant as possible.

If you take up real estate in someone’s feed with images, use that space wisely, advises @Kimota. #socialmedia Click To Tweet

Pretty as a picture

I’m a fan of adding graphic text to the image, such as the title or a key quote from the content, or even a newsworthy stat that gives some indication of the valuable information just waiting behind the click. While this text still has to be read, it is consumed along with the image and is usually much larger than any surrounding text in the feed. This approach treats images in social as more akin to a banner or a preview than the standard blog image many content producers are providing.

A perfect example of this approach is how our very own CMI uses images in social. Each blog post image clearly displays the title, author byline and CMI logo, giving CMI content a distinct visual style easy to spot in the busiest of feeds.

Alternatively, you might develop a distinctive image style through how you select or treat your images. Some brands use filters and overlays, while others might have rules dictating predominant colors or other graphic elements to create a recognizable look and feel.

Lyft — known for its mustachioed cars — projects the same fun image in social. It uses loud, pink-and-purple tones in its visuals, often combined with hand-drawn typography and cartoons. The cars are easily noticed and recognized as uniquely Lyft. For my own blog, I solved this problem by only using illustrations taken from comic books in the public domain, thereby sidestepping any pesky copyright issues. This eliminated the need for me to use the same stock-image libraries as everyone else while also contrasting with the dominance of photos filling my feeds. Plus, this restriction also prevents me from ever being too literal or obvious, as there are no smartphones in 1930s comics, for example. Yes, it still takes me a while to find just the right comic frames to be contextually relevant or suitably analogous, but the final result makes my content indisputably mine from first glance alone.

In some cases, it may be more effective to create one image for the blog or website and another for social, possibly even one for each network. After all, these can be different environments with different design requirements – never mind different audiences and behaviors. (Best practice image dimensions and formats for social do change, so I won’t go into them here. Google is your friend for that.)

Be more effective with your images – create one for the blog & another for social @Kimota. #visualcontent Click To Tweet

While that’s ultimately up to you and your design strategy, creating additional images for social shouldn’t be too much extra work if you have the necessary templates and design elements in place, along with the time and workflow to get them right. That’s why the design of your content, including the social elements, should ideally be worked out alongside content production. If you have an editorial calendar, there really isn’t much reason why it shouldn’t.

I’m a great believer that the need to drive clicks from social should never be the guiding principle of your content – for the road to marketing hell is paved with clickbait – but it shouldn’t be treated as an afterthought either. Even the most talented person can still flunk a job interview by turning up in whatever clothes were closest just before leaving the house.

A version of this article originally appeared in the August issue of Chief Content Officer. Sign up to receive your free subscription to our bimonthly, print magazine.