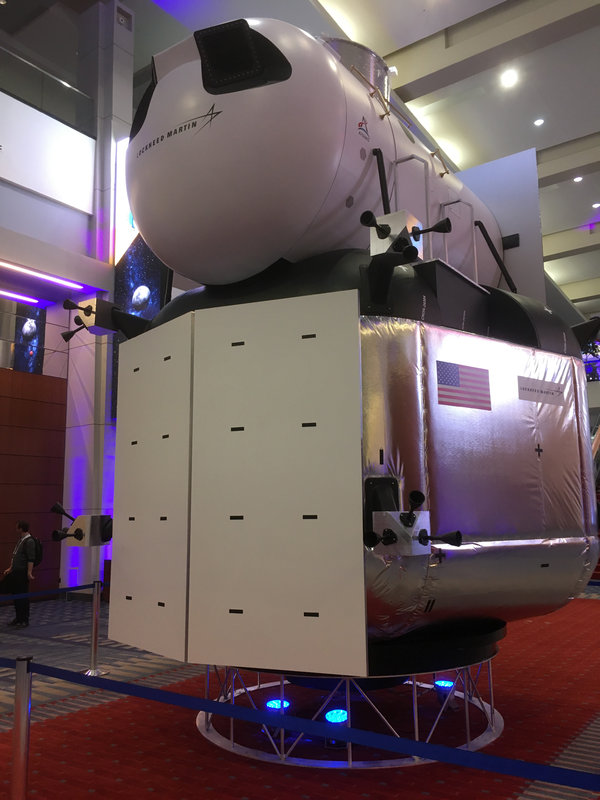 WASHINGTON — The race is on to build the next spacecraft that will land American astronauts on the moon — and the richest man in the world wants to come in first.

On Tuesday, three major aerospace companies led by Blue Origin, the rocket company started by Jeffrey P. Bezos, chief executive of Amazon, announced they would collaborate on a design that they will submit to NASA.

The Trump administration has accelerated the American effort to return to the moon by four years, aiming at 2024 instead of 2028. Private companies are central to this faster timeline, which has driven NASA to turn to nimble start-ups, like Mr. Bezos’s Blue Origin. His company, working with other powerhouse corporations, would not only build spacecraft for the agency, but replace NASA in designing them, too, and all at a fixed price.

The hope is that these companies will get the job done faster for less money.

By partnering with Lockheed Martin, Northrop Grumman and Draper Laboratory, Blue Origin, founded by a billionaire with grand space dreams, will gain skills and experience it lacks. Such a partnership puts Mr. Bezos’ company on a footing to take a leading role in American efforts to return astronauts to the moon.

“This is the only way to get back to the moon fast,” Mr. Bezos said on Tuesday as he accepted an award from the International Aeronautical Federation.

As far back as the Apollo missions 50 years ago, aerospace giants and their lobbyists shaped NASA’s human spaceflight programs. But Blue Origin’s bid shows how the desires of a handful of very wealthy individuals, joining forces with those corporations, are exerting influence on sending Americans to deep space.

Another billionaire-led space company working with NASA, SpaceX, has set its sights on Mars, with its founder, Elon Musk, recently unveiling a giant spacecraft called Starship to go there. But it has also pitched the spacecraft as aiding NASA’s moon plans, with Gwynne Shotwell, SpaceX’s president and chief operating officer, saying on Tuesday the company hopes to land there by 2022.

The inflow of dollars — not just from billionaires, but also venture capitalists and institutional investors — has altered the space industry, said Mary Lynne Dittmar, executive director of the Coalition for Deep Space Exploration, a space advocacy group. Some of the companies now have the resources to develop and build entire systems, like a lunar lander.

“Once you start doing that, then NASA can start leveraging that,” Dr. Dittmar said.

While NASA has been working on a big rocket known as the Space Launch System and a capsule called Orion for human missions to deep space, it had not yet started on a lunar lander.

In the past, NASA has led the design process and used what are known as cost-plus contracts. The companies were reimbursed for what they paid to build the spacecraft plus an additional fee for their services. But increasingly, NASA is using a markedly different approach with fixed-price contracts.

In contrast to Apollo, where the giant Saturn 5 rocket carried all of the pieces needed for a moon landing, NASA this time will employ a more complex choreography for the new missions, named Artemis. (In Greek mythology, Artemis is the twin sister of Apollo.)

First, NASA will construct an outpost called Gateway that will orbit the moon. Then the pieces of the landing system will be sent to the Gateway.

While the first Artemis moon landing will carry only two astronauts, the same as the Apollo missions, they should have more spacious accommodations. With the ascent stage stacked on top of the lander, the spacecraft will be somewhat heavier, somewhat wider and considerably taller than the Apollo landers.

That will allow a longer stay of about a week on the moon’s surface. During Apollo 11, the first moon landing in 1969, Neil Armstrong and Buzz Aldrin were on the moon for less than a day. During Apollo 17, the last time humans landed, Harrison Schmitt and Eugene Cernan stayed for just over three days.

When all of the pieces are in the place, the astronauts are to launch in an Orion capsule atop a Space Launch System rocket to the Gateway where they will board the lander for the moon. They are expected to land near the moon’s South Pole.

NASA is working on compressed timelines, with submissions for the lander contract due Nov. 1. And some companies realized that they might not have all the pieces to put together a strong proposal.

Blue Origin does not yet have experience with sending people to space. It has so far has only tested a small reusable rocket and capsule to carry tourists to the edge of space. The company has been working for several years on the Blue Moon lander, but it was originally designed for taking heavy cargo, not people, to the moon.

“A national priority requires a national team, so we brought what we feel is best in class to the job,” said Brent Sherwood, the vice president of advanced development programs for Blue Origin.

At the same time, Lockheed Martin, which is building the Orion capsule, had concentrated on a lunar ascent module. “We strongly believe that the best way to safely and quickly accomplish this lunar landing is to leverage existing human-rated technology from Orion,” said Lisa Callahan, vice president and general manager for commercial civil space at Lockheed Martin.

Northrop Grumman — the Grumman part of the company built the Apollo lunar lander 50 years ago — thought that its Cygnus spacecraft, which carries cargo to the International Space Station, could be adapted to serve as the orbital transfer module.

There will most likely be other proposals, notably from Boeing, the biggest space company not part of the Blue Origin partnership. A Boeing spokesman said in an email statement, “We are working on lander systems development under NASA contracts from summer and expect to put in a bid for the lander program.”

More than one team will probably advance to the next round of the competition. NASA officials have said that they would like to quickly select three proposals to move forward next year, and that two different landers would be built. One would be for the 2024 landing; the other would go to the moon the following year.

Mr. Sherwood of Blue Origin said the partners had a plan that can meet the 2024 deadline. But because the competition is still open, he declined to give details.

The developments could also be hindered if Congress does not provide the additional $1.6 billion that NASA says is needed to begin work on the landers. Congress has yet to finish work on the budget for the 2020 fiscal year, which began Oct. 1 and did not provide financing for a moon mission in the temporary funding that runs through Nov. 21.