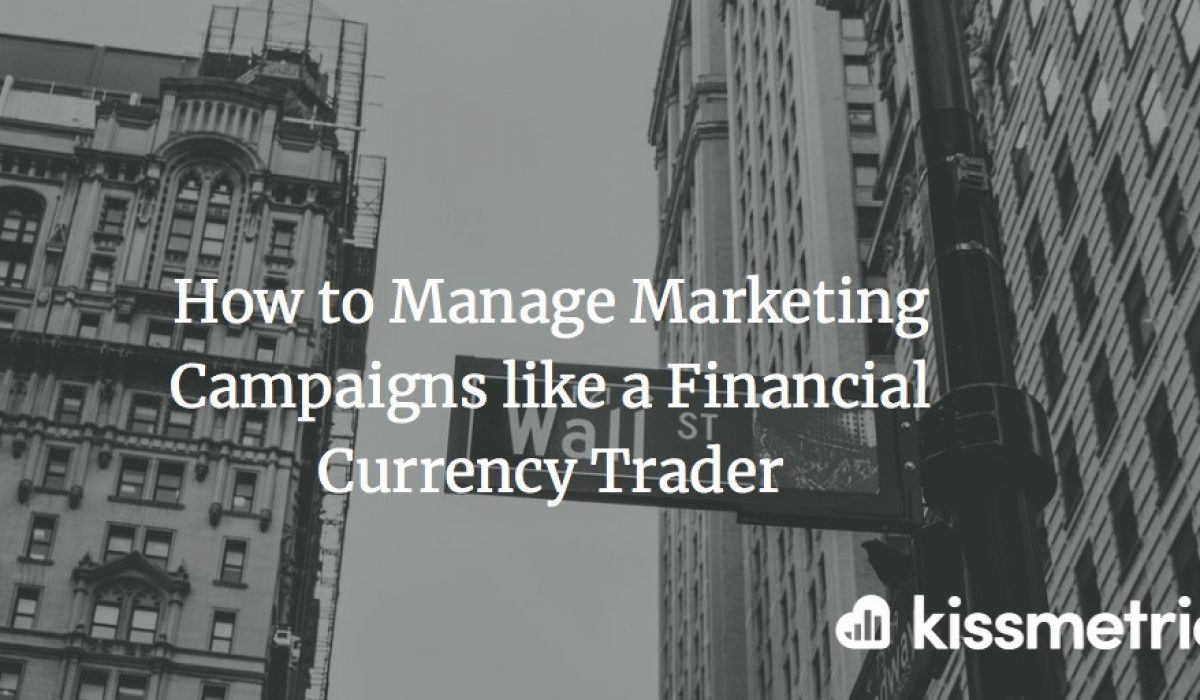 KPIs are due EOD.

Profit and loss statements need to be generated.

Budget status updates have been requested.

Soon enough, you’ve depleted your budget to the last few cents, and you have nothing to show for it.

Or worse, you didn’t spot the right trends in a successful tactic before spending too much on the underperforming ones.

And now you don’t have enough money to re-allocate to top-tier mediums.

Start With a Currency Arbitrage Mindset

Here’s the problem with digital marketing.

And you never really know how a campaign will perform until you try it.

That saying (1) is unhelpful and (2) requires extra money to experiment with potentially budget-draining activities.

You really don’t know which playbook, game plan, or actionable tip is going to work until you experiment. The stuff that worked last year almost certainly won’t work the same this year.

Not to mention that every business is structured differently. Each caters to diverse audiences. So copying your competitors or that awesome tactic you read about is also out.

What works for Company X might bankrupt Company Z.

If there were set-in-stone tactics that produced million-dollar businesses overnight, every dude on GrowthHackers.org would be rich.

PPC might be amazing for your friend’s business. But that doesn’t mean investing in PPC is instantly going to turn you into the next Zuckerberg.

So where do people turn when they hit this realization? A/B testing.

You all know those case studies that promise a mythical pot of gold at the end of a rainbow.

Okay, maybe that’s a slight exaggeration, but it’s not that far off.

Most A/B tests fail, though.

They take too long to get results. Plus that whole “bias” thing. And of course, sample size.

You need a minimum of 1,000 conversions monthly for statistical significance.

So what should you do instead?

Currency arbitrage is a strategy in which the trader takes advantage of different spreads offered by brokers for a particular currency pair by making trades.

Different spreads imply a gap between the bid and ask prices. Meaning, they can buy and sell pairs to make more money.

What does this mean in English?

Place lots of small bets on different tactics, channels, platforms, and mediums so that you can evaluate their effectiveness in real-time.

Once you see specific trends developing (either positive or negative), you double down on the winners and cut your losses on the rest.

This way, you can test multiple experiments at once without the bias and lack of statistical significance that comes with A/B testing.

You get in and out fast. And you come out on the other side with specific campaigns to focus on rather than a mixed bag.

For example, you can’t always control the end result. But you can control the inputs that eventually get you there. And you can monitor, forecast, or predict where those will fall based on just a few days’ worth of performance.

Then, you can fine tune and adjust each ‘level’ accordingly to squeeze out the best results.

Adjusting Your Budget Based on Market Movement

The first banner advertisement ever appeared on HotWired in 1994.

Look at this gem:

By today’s standards, it looks like a joke, right?

But it gets worse:

See that subliminal “YOU WILL” message on the right???

Super subtle. Lord have mercy on us all.

This banner ad debuted with a click-through rate of 78%.

If you told any marketer today that your banner ads are getting a 78% CTR, you’d get laughed out of the room.

This all brings me back to one concept coined by Andrew Chen:

The law of shitty click-throughs:

All marketing strategies over time will result in shitty click-through rates.

As more and more people use these tactics, the market becomes saturated.

Users get sick of it, and they don’t click. Or they go banner blind.

You can see trends that follow this concept with almost any marketing activity.

You paid nothing and reached thousands or millions of eager users.

Now, organic reach is almost nothing: As more and more marketers use the concepts put in place, it results in fewer and fewer results.

This is a perfect example of market movement and active management in currency trading.

Just because something is generating an insane ROI now, doesn’t mean you can ride it off into the sunset.

What was hot one day (banner ads) isn’t now.

If you don’t adjust your strategy based on analytic research and forecasts, you risk declining performances associated with passive management.

Passive management is when you sit idly by and attempt to cruise to the finish line on your current strategy.

Active management relies on analytical performance data over time to spot trends and make informed decisions about what needs to change.

If you notice a decline in organic reach on Facebook, you probably shouldn’t be dumping your campaign dollars into it.

Unfortunately, us marketers (including me) fall into this trap more often than we’d like to admit.

You log in to Google AdWords or Analytics and see some great conversion data:

Your plans are working as you’d hoped.

But that doesn’t mean you can sit back and let the good times roll.

Sure, you can do that for a little bit. But over time, as markets, tactics, and consumers shift, you’ve gotta take an active role in managing campaigns.

Adjust based on trends.

A great way to do this is by analyzing specific topics on Google Trends: Or even keeping up to date with the latest studies on popular marketing tactics by conducting a basic Google search: Stay up-to-date with market movement and look at the underlying trends or patterns. Because when people are blogging about it, tweeting it, favoriting it, or liking it, it’s already too late.

Be Cautious in a Bull Market

When everything is running smoothly, it’s referred to as a bull market.

Investor confidence and financial optimism are at an all-time high.

On the surface, everything is running like a well-oiled machine.

Unemployment is low. The economy’s GDP is growing steadily. Stocks are rising.

And your marketing tactics are getting more traction.

But with all of this surface-based optimism comes serious potential side effects:

It now becomes difficult to predict potential shifts and trends or when tactics might change.

Facebook’s organic reach was booming just a few years ago. Until, of course, it didn’t.

There is actually a pretty easy explanation for it. Simple supply vs. demand.

User growth is slowing while the number of content pieces has exploded exponentially. Too much supply, not enough demand.

Right now it’s the place to be for your content. Just give it a minute.

And don’t get swept up by the bull market.

Find your own Big Short

Have you ever seen The Big Short?

If not, I highly recommend it. It’s a great movie.

Not just because it’s an incredible, intense account of the 2005 housing crisis.

Mainly because it features Steve Carell:

In all seriousness, it’s a great movie that heavily relates to digital marketing.

The main concept of the movie was based on the true story of Michael Burry, a hedge fund manager who shorted the housing crisis of 2005.

He believed there was a housing bubble, leading him to short sell and bet against the banks who thought he was a chump, taking his deals like candy.

The idea of short selling is motivated by the belief that a security’s price will decline, enabling it to be bought back at a lower price point for maximum profit.

And people thought Michael (Burry, not Prison) was insane.

Who in their right mind bets against the housing market when prices are nearly doubling year after year?

But Burry noticed a few troubling trends. He saw that subprime home loans were in danger of defaulting. And many adjustable rate mortgages with balloon payments were all adjusting around the same time.

He decided to throw more than one billion dollars into credit default swaps.

It’s safe to say that the banks weren’t too happy in the end.

Here’s the moral of the story:

Very few people believed him. But Burry discovered the mystical unicorn that most marketers strive to find.

The main point as it relates to marketing campaigns is this:

You need to find your own big short.

Your own diamond in the rough that you can tap into before anyone else.

Your own display ad invention that generates a 78% CTR.

Finding the tactic that brings your conversions up by 10x.

Sounds wonderful. But you know it’s not easy. Because it hasn’t been blogged about or shared at conferences just yet.

But examples of it do already exist in the marketing world today.

For example, Brian Dean of Backlinko raised the link-building bar with his skyscraper technique.

He took a spin on a classic link-building tactic that increased his search traffic by 110% in just two weeks. On top of a massive increase in traffic, he generated countless backlinks from thousands of different referring domains: He effectively took his link-building strategy to the next level by going against the grain.

He didn’t sit back and ride the wave of guest blogging or other outdated, declining strategies.

He found his own big short.

While small marketing tactics like A/B testing and creating new ads or creative for your campaigns is a step in the right direction, it isn’t the end-all-be-all. Small bets don’t move the needle.

They merely help you figure out if you’re on the right track (or not). And help to show you when it’s time to go all-in.

Money can get away from you fast if you aren’t careful.

Even worse, you can get so caught up in data that you miss the right trends.

Trends that tell you which aspects of your campaign are winning and which are losing.

Instead of flying blind or crossing your fingers, think like a financial currency trader.

Analyze the data with a currency arbitrage mindset. Keep up with market movement by taking an active management role in your campaigns. Be cautious in a bull market when everyone’s saying the same things.

And don’t be afraid to bet big when the time comes.