An introduction to the LGBT market, cautions, and advertising examples

LGBT, you might ask? LGBT is the acronym for the Lesbian, Gay, Bisexual and Transgender community—you may also use LGBT+ to be inclusive of additional members of this group. With the acceptance and visibility of people with various sexual orientations and gender-identities having increased and welcomed, in the last number of decades, I thought it would be a good time to bring understanding to current marketeers inlcuding the members of this group, demographics, and warnings. I have also added several example campaigns to demonstrate how to advertise to this community.

First, it is important to understand the difference between sexual orientation and gender-identity.

Sexual orientation is the emotional, romantic (or sexual) attraction of another person or persons of the same sex, opposite sex or gender.

Gender-identity, however, reflects how one perceives their own gender. This is different from gender as it does not look merely at biology. For example: when a man feels he is really a woman but in the wrong body. In terms of biology, he is a male. However, the gender-identity is female. The important difference to understand is how you address this individual, for example, which pronouns to utilize.

Considering this visibility and acceptance, the effects are important for marketers, as you should be aware of changes in demographics to improve and optimize marketing. I would ask you to keep an open mind with this article, regardless of your own opinions towards the LGBT+ community.

In this article, I wish to inform the readers about the LGBT+ segment to you in detail, with an examination of the demographics, warnings and several examples with results and commentary. I shall treat this article in a neutral tone, sticking to facts and information, though I disclose that I am part of the LGBT+ community.

It can be difficult to understand and explain the entire LGBT+ community as it is in a state of constant flux as to whom is included. With the level of acceptance of minorities in the areas of sexual orientation or gender-identities, the complete acronym (at this point) is LGBTQQIP2SAA.

While you do not need to use this whole acronym, it is good to know the various elements within this group—both personally and professionally.

At the start of the 1990s, the gay community started off as LGB (Lesbian, Gay, Bisexual). Thanks to the acceptance of this community it moved to include numerous others inside its umbrella. First, the Transgender community was included, and more ever since.

Note: You are more than welcome to use LGBT+ to address the entire community.

As mentioned the full acronym (at the current time, and to my knowledge), is LGBTQQIP2SAA. Let me explain these groups.

Now you’re up on terminology, you can see the diversity of this whole group. With this understanding, you will need to know how to use pronouns with certain groups, as they do not always comply with our standard of ‘he’ or ‘she’.

Using the right pronouns is paramount to a successful relationship with the LGBT+ community.

Transgender individuals, for example, prefer to be addressed to the gender-identity they identify with. So, a trans-man would prefer he/him and a trans woman would prefer she /her.

The intersex community does not always use he or she pronouns, as they do not feel they fit in this duality. Intersex use non-binary pronouns such as zi/zir/zirs or zi/hir/hirs. If you would like further insight: The Vanderbilt University’s English Language Department has an excellent comprehensive document on this matter, which you can find here.

This may not be a factor in your marketing campaign, but again, being aware of such matters will be helpful when you work with the LGBT+ community.

Contrary to popular belief, there is quite a sizeable LGBT+ community around the world. While we cannot assign numbers to Allied members, we can report on the amount of LGBT+ members. We’ll look at the information for the UK and USA for now. 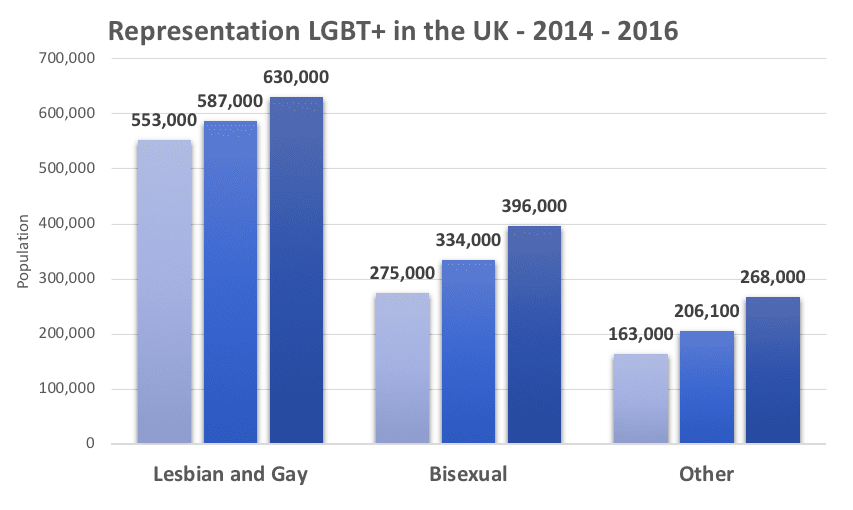 The study also noted: the largest group that identified themselves as LGB were in the age group of 16-25 (4.1%) and the LGB group were identified as most likely to be single, never married or civil partnered with 70.7%. Further, it is interesting to mention that

“Around 2.7% of the population in London identified themselves as lesbian, gay or bisexual (LGB), the highest proportion of any English region” – Office for National Statistics

These interesting statistics will help in building a persona for your campaigns or use the right demographics to reach this audience. 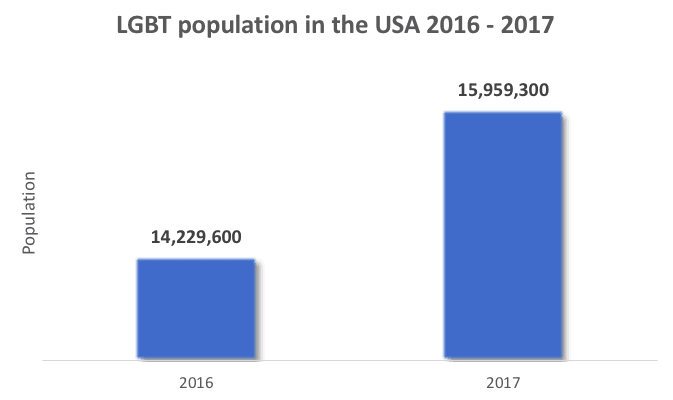 Unfortunately, the reporting of specific gender-identities and sexual orientations has fallen short in being in current censuses, so while many studies have taken place, there is no one perfect report. As such these figures should be approached with care.

Whilst the LGBT+ community has been accepted and is visible in many countries, not everyone has been so. With the increasing global economy and market, we find ourselves approaching many different markets around the world. When you wish to reach an international LGBT+ market, you may wish to pay attention to some countries and locations.

As of August 2017, 72 countries in the world have laws criminalizing homosexuality, indeed with 8 states that apply the death penalty. It would be prudent to avoid applying any LGBT+ marketing in these areas, other than the fact that your marketing would not be published due to local law. Please do research or take note of the countries where your campaigns may not be welcomed. A map below will make you an informed decision as to where you would receive a more positive response.

On the positive side, over 82 states have protection for the LGBT+ community and could be prospective markets. You can even target married/civil-partnered couples in 52 nation states or LGBT+ couples who have adopted in 53 states 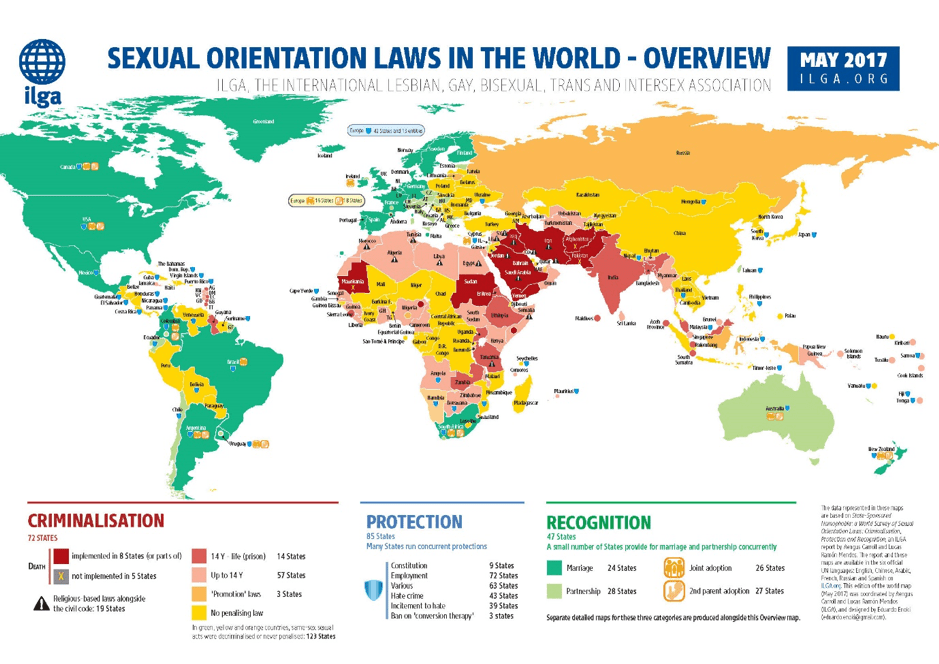 Let’s look at some great examples of LGBT+ marketing that has occurred!

In an attempt of Amazon to reach a larger platform of customers, they have created an advert to promote their Kindle Paperwhite product in 2013. This is an advert with a casual atmosphere and the LGBT+ presence wasn’t forced, but still included.

The video shows a man trying to read from a tablet, with the reflection of the sun the man complains to an arriving woman that he cannot read his screen. She then mentions that Kindle is perfect for the beach, mentioning several unique selling points. He immediately gets on his tablet and buys the product, he then mentions they should celebrate. The woman tells him her husband is bringing her a drink, and the man replies, “So is mine”. The camera then moves to the bar showing two waving and smiling men.

Although there is no official video on YouTube, some channels have uploaded into their own accounts. The two channels with the most views, showed 398,780 views and 224,605 views respectively. Additionally, the first channel has over 3.500 likes, and only 302 dislikes. The second channel had 2700 likes with only 240 dislikes. The advert also showed a large amount of comments, with 1458 comments on the first channel, and 896 comments on the other.

In the case of Dove—a personal care brand, owned by Unilever— in their advert, they have selected 6 moms from various backgrounds telling their stories. In this advert, Dove has also included a transgender couple—from articles on the subject, this was the first time a post-transition mom was depicted in a US commercial. In a whole, this was a campaign targeted at all moms, with their campaign hashtag #RealMoms.

First, you see Shea, a grad student, sitting on the floor feeding her baby, next to her female partner. Then to a shot with both parents behind a baby dome, says to the camera: “We’re both the biological parents.” Then goes on to say: “You get people like: What do you mean, you’re the mom?” in an amused manner.  “We’re like yup, we’re both gonna be moms”. Then the segment moves on to the other moms.

In terms of response, the LGBT+ community responded positively:

“Kudos to the brand for not only being LGBTQ inclusive but for being willing to think beyond the more common solution of showing a cisgender two-mom couple (much as I love seeing LGBTQ parents of any type on my screen).” – Award-Winning blogger Dana Rudolph

However, there were a lot videos about the dove ad with extreme negative feelings about including a transgender mom. This shows that you must prepare yourself with a good response plan to the possible reviews on and offline.

In terms of stats: the official video had over 207,558 views, but with 5.800 dislikes, and just 944 likes. Due to the comments being disabled, it’s not possible to ascertain the reasons for the large amounts of dislikes.

In Nike’s “Unlimited Courage” campaign, they celebrate casual and professional athletes endeavour to reach new height and ambitions. For this advert, showed at prime-time at the Rio Olympics, they showed Chris Mosier who was the first known, out trans athlete to make it to the men’s national team for the 2016 World Championship. In this advertisement you see Chris training hard with running, cycling, body lifting, while replying to questions such as “How’d you know you’d be fast enough to compete against me”, with a bluntly reply of “I didn’t.” Playing on the theme of despite your upbringing, or hardships, if you keep training, you will achieve your goals (with Nike, of course).

The video on Nike’s official channel reached over 3,214,638 views. There was still opposition to this advert with over 2300 dislikes, but with 5900 likes it seems to have had more positive response than Dove’s Real Moms. From the 1541 comments, it appears to be a well-received advert to the LGBT+ community.

In a vie to reach a younger segment of the LGBT+ market, McDonalds released the “Come as you are campaign”.

“We wanted to take a look at how French society is today. We’re very comfortable with the topic of homosexuality, there is obviously no problem with homosexuality in France today”.

Officially, the company explained they did not target the LGBT+ community with this advertisement. The statement release (translated from French):

“Today, we are targeting extremely broad, we have a big penetration, so McDonald’s customers, it is the entire French population, we do not need to do targeting. We hope that this type of film is able to touch anyone, whether homosexual or not. (sic)“

In this commercial, you see a young man sitting at the McDonalds looking at his class-picture when he receives a call. Telling the recipient that he’s was just thinking about that person, just looking at the photo. He ends the call saying “I miss you too”. His father comes over (with food) and talks to his son. Seeing his class-photo and telling him that he was quite a lady’s man and that it’s too bad he’s in an all-boys class, and he could get all the girls. He looks at his dad and smiles. The ad fades out, with the campaign title “Venez come vous êtes” (Come as you are).

This video, (not from the official channel). Reached over 5,644,972 views. With over 30,000 likes, it seems this advert was very well liked. The number of dislikes was 3.700. The comments were disabled for this video, so it is not possible to understand the reasons for the negative likes.