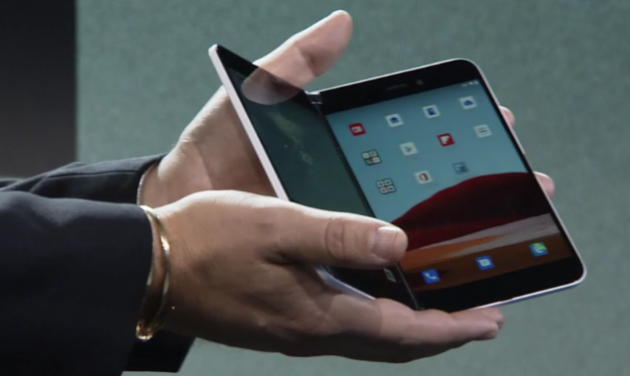 Wow, what the heck is this?

Here’s everything Microsoft announced at its big Surface event, including a foldable smartphone

That was our first reaction to Microsoft’s unveiling of its new Surface Neo device this morning, with two side-by-side 9-inch screens and a fold-up keyboard that turns it into a small laptop.

And that was before the company unveiled a smaller device called the Surface Duo, which is a dual-screen hybrid tablet-smartphone that will run Android apps in a surprise partnership between Microsoft and Google, perhaps the ultimate example of the Redmond company making peace with a longtime industry rival.

The Duo has two 5.6-inch screens, and unfolds to 8.3 inches. It’s sparking comparisons to the Microsoft Courier, the dual-screen device that Microsoft developed in secret a decade ago before shelving without releasing as a product.

#Surface Duo is the first Surface that fits in your pocket! Two 5.6” screens that unfold to 8.3”.
Surface Duo brings together the best of Microsoft productivity, Android apps and Surface hardware design into a device you can take anywhere. Coming Holiday 2020. #MicrosoftEvent pic.twitter.com/eSs1cZrSV9

Microsoft isn’t pitching it exclusively as a smartphone, but Duo represents “the best chance Microsoft has ever had to drive success in smartphones,” said technology analyst Patrick Moorhead of Moor Insights & Strategy, reacting to the news from the event.

The new devices won’t come out until holiday 2020, but the company gave a sneak peek at its larger Surface hardware event in New York this morning.

Taken together, the devices represent the long-awaited arrival of dual screen products from Microsoft, after years of rumors and thwarted initiatives. The company says it has been developing the hardware for years, with hundreds of engineers involved.

“There’s truly nothing out there like this,” Panos Panay, the company’s hardware chief, said of the Surface Neo. “It’s amazing when you put two screens side by side to see how the brain lights up.”

Other hardware makers including Samsung — reviews of its Galaxy Fold came out today — and Dell are also developing their own foldable devices that could represent the next evolution in personal electronics as the market for PCs and smartphones are showing meager growth and even declining in some cases.

Microsoft on Wednesday also announced a new version of Windows, dubbed Windows X, designed for dual-screen devices, with features including “spanning” to expand an application across two screens. Features include a Wonder Bar that displays above the keyboard when it’s folded up on top of the screen.

The company says it’s announcing the devices now to ensure that software developers have time to develop apps before their widespread release.

MORE: Here’s everything Microsoft announced at its big Surface event