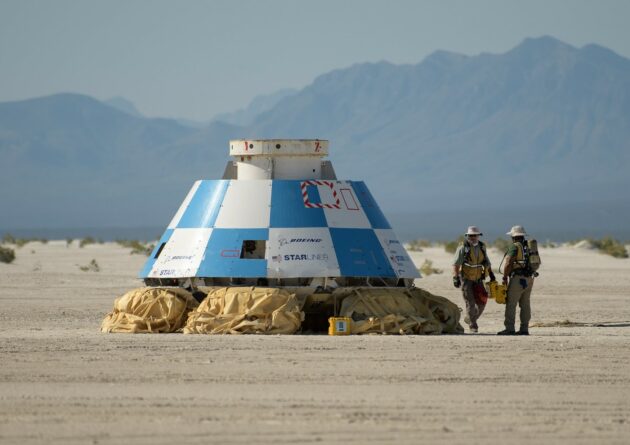 NASA confirmed today that Boeing is scheduled to conduct the next high-profile test of its CST-100 Starliner space capsule in a little more than three weeks.

The target data for Starliner’s pad abort test is set for Nov. 4 at White Sands Missile Range in New Mexico, NASA said. That’s in line with the plan that Boeing executive John Mulholland laid out earlier this week at a New Mexico space symposium.

If next month’s test is successful, Boeing would target Dec. 17 for the launch of an uncrewed Starliner to the International Space Station from Cape Canaveral Air Force Station in Florida, atop a United Launch Alliance Atlas 5 rocket.

And if that test flight is successful in turn, Boeing is expected to send a crew of spacefliers on a demonstration flight to the space station in early 2020. That’s roughly the same timetable that SpaceX is working toward for the first crewed flight of its Crew Dragon space taxi.

SpaceX and Boeing are developing the spaceships under the terms of multibillion-dollar contracts with NASA. Boeing’s Starliner and SpaceX’s Crew Dragon are designed to accommodate as many as seven astronauts for trips to and from the space station, restoring a U.S. crewed launch capability that was lost in 2011 when NASA retired the space shuttle fleet.

Boeing’s pad abort test involves having an uncrewed Starliner spacecraft fire its launch abort engines to blast off from a test pad, rise about a mile in the air and make a landing about a mile away with the aid of parachutes and airbags.

Such a scenario would come into play during an actual mission if a launch-pad emergency required the crew and its capsule to rocket to safety.

More than a year ago, Boeing was dealt a significant setback when a test of the launch abort system went awry due to an unwanted leak of propellant. The problem led to months of delay, but the launch abort engines passed a similar test this May.

Ferguson came to Boeing from NASA’s astronaut corps, where he served as commander of the shuttle fleet’s final flight in July 2011. During that mission, he and his crewmates left behind a small American flag that’s destined to be retrieved and returned to Earth by the next crew to be launched from U.S. soil.

Now Ferguson is hoping to be part of the team doing the retrieval. “Sort of like a grown-up version of ‘capture the flag,’ ” he told Reuters in August.