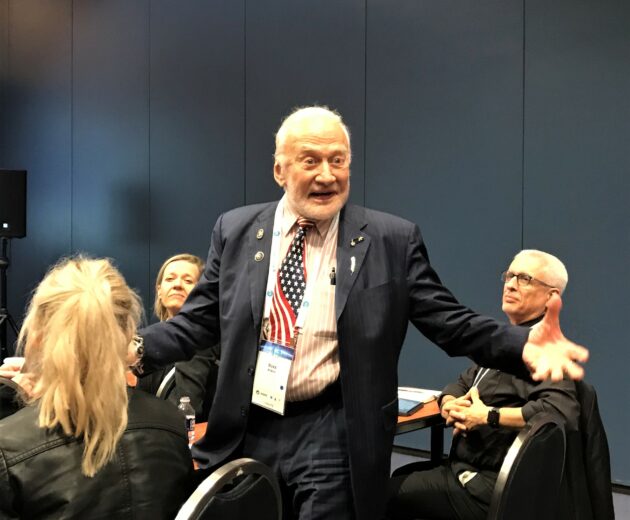 WASHINGTON, D.C. — Apollo 11 moonwalker Buzz Aldrin says there’s no need for the lunar-orbiting Gateway outpost that plays a key role in NASA’s vision to land astronauts on the moon by 2024.

Instead, he envisions a differently configured transportation system that makes use of commercial rockets under the leadership of a “Space Exploration Alliance” that includes China as well as NASA’s current partners.

“I’m not a big fan of the Gateway,” Aldrin said today during a panel discussion presented by the International Academy of Astronautics in conjunction with this week’s International Astronautical Congress in Washington. “I do not believe we need a permanent structure around the moon.”

Aldrin sided with critics who say the Gateway’s benefits as a way station for moon-bound astronauts are outweighed by its limitations and its multibillion-dollar cost.

NASA has countered such criticism by insisting that the Gateway is a key piece of a moon-mission puzzle that also includes its Orion space capsule and a yet-to-be-launched heavy-lift rocket called the Space Launch System, or SLS. In order to meet the White House’s 2024 deadline for a moon landing, NASA will rely on a stripped-down Gateway at first, and add to the structure during the years that follow.

To get to the moon’s surface from the Gateway, NASA will need to procure a lunar lander, as well as a transfer vehicle to get the lander from the Gateway’s highly eccentric lunar orbit to a lower, more circular orbit.

Aldrin saw that as a bug, not a feature. “SLS cannot get Orion to lunar orbit with any particular maneuver capability — and that is why we need to go into orbit that is not quite close enough, and now we have to build a big spacecraft,” he complained. “It takes three spacecraft to make a landing.”

As an alternative, Aldrin proposed building a reusable trans-orbit craft that would shuttle the astronauts and their hardware from low Earth orbit to low lunar orbit and back. “I dub it the Buzzcraft,” he said.

The concept is similar to the cycling spacecraft system that Aldrin has long advocated for Mars missions.

Aldrin acknowledged that it’d be tough to make such a radical change in NASA’s architecture for the upcoming Artemis moon missions.

“We can’t cancel SLS, we all know that,” Aldrin said. “Politics and big-company persistence … lobbyists … Congress … that is what has messed up our program.”

In the long run, he said it would make more sense for the world’s spacefaring nations to combine their efforts under the aegis of a governing body he called the Space Exploration Alliance. In Aldrin’s view, such an alliance should include NASA and its traditional space partners, including Russia, the European Space Agency and Japan. He said it also should include China, which has been largely left out of cooperative space efforts due to U.S. law.

China has its own plans for missions to the moon and Mars, as does SpaceX.

“I think it’s going to require a bigger international organization to bring around the consensus for a plan,” Aldrin said. “What is the plan for exploration? Who can offer what? … How do we make decisions? I don’t think the U.N. is a good model for that. I don’t know what is, but that’s a big challenge.”

He said that the alliance could make use of private space companies — including billionaire Elon Musk’s SpaceX, Amazon CEO Jeff Bezos’ Blue Origin space venture and United Launch Alliance, a Boeing-Lockheed Martin joint venture — to turn its consensus vision into a reality.

“I’m not sure that SpaceX working with NASA, or Blue Origin working with NASA, is going to change things very much. They’re going to go do their thing,” Aldrin said. “But if there is this Space Exploration Alliance … working on something somewhere, now there are increased markets, there are increased reasons for SpaceX and Blue Origin to share and to work with the rest of the world.”

Eventually, the alliance “should make room for India, Australia, the Emirates” and other entities that have the capability to advance space exploration, Aldrin said.

“Obviously, SpaceX has that capability, and so does Blue Origin, but it’s rather narrowly directed, based upon the desires of return,” he said.

However the international climate for cooperation evolves, the 89-year-old space pioneer said time was of the essence.

“At almost 90 … I can tell you, time is a precious resource,” Aldrin said. “We have spent a lot of time over the last 40 years on wishful thinking. I think if you had every moonwalker and Apollo astronaut here today, they would all say, ‘Enough wishful thinking! Let’s get back into action! High national purpose, the moon and Mars!’ “