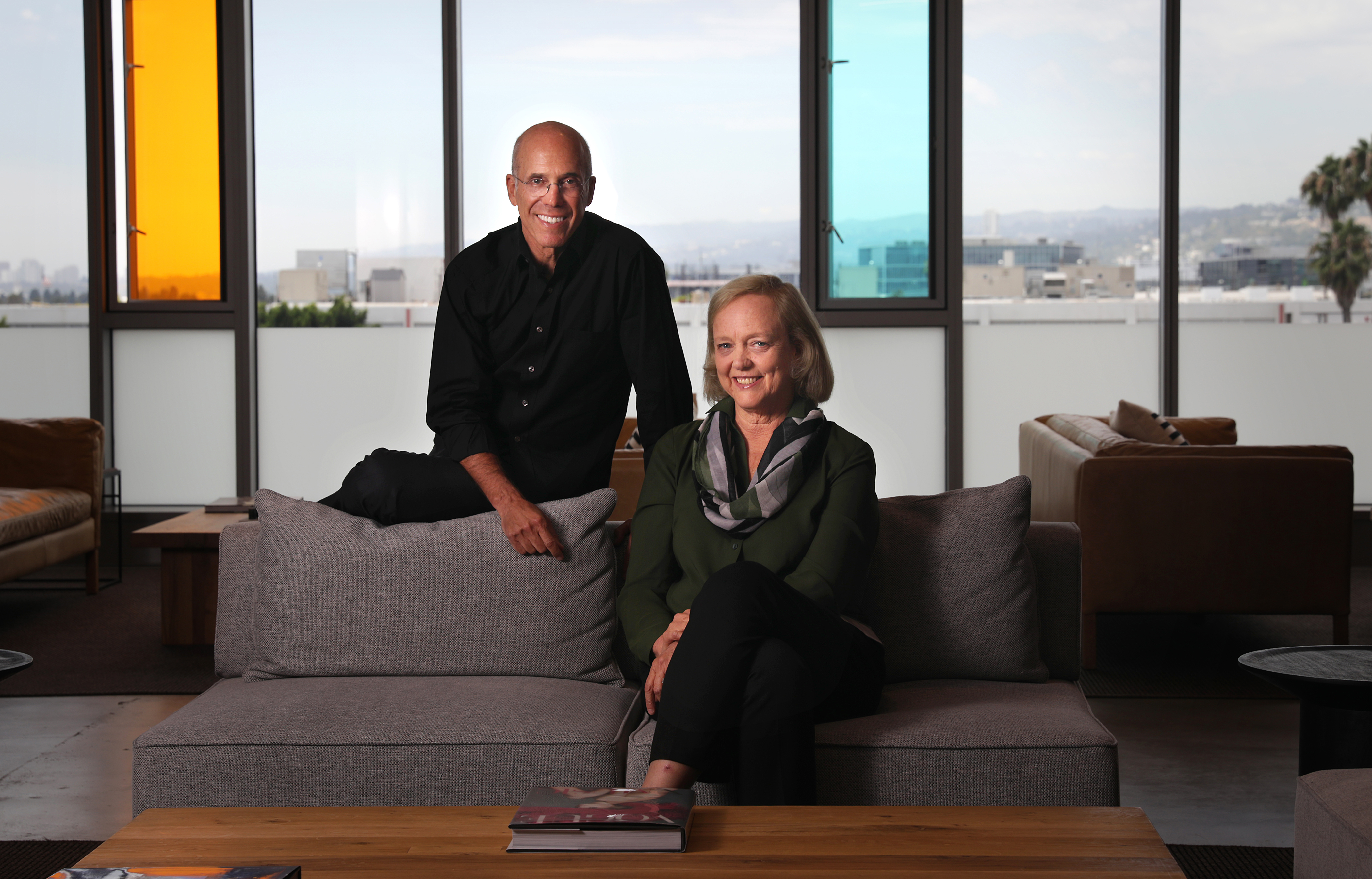 If Hollywood and Silicon Valley created a baby, they might call it Quibi.

Quibi, a Hollywood-based streaming company that stands for “quick bites” of video, plans to take new, premium films shot by award-winning directors like Steven Spielberg and Catherine Hardwicke and present them in short episodic chapters about 10 minutes long. The twist: the stories will be developed exclusively for viewing on mobile phones.

The content will be distributed through a new mobile app, designed by a tech team that has consulted with Hollywood creators to make an interface that is appealing to filmmakers and elusive younger audiences.

“What we say internally is we’d like to be the quality of HBO and offer customers the convenience of Spotify,” Whitman said in an interview from Quibi’s Hollywood office. “We’re not Facebook Watch. We’re not Snapchat. We’re not Instagram TV. We’re not YouTube. We’re Quibi, and it’s not denigrating those platforms at all … but we’re staking out a premium position relative to those.”

In the last year, Quibi has made waves after raising $1 billion in financing from Disney, WarnerMedia, and other major studios and investors, gone on a hiring spree and released a flurry of announcements for upcoming projects with prominent filmmakers.

To hear Katzenberg tell it, Quibi is playing a pioneering role in crafting a new form of storytelling that combines elements of feature film storytelling and episodic television.

“What we’re doing is just merging those two ideas together to what we hope is the third generation of film narrative,” Katzenberg said.

But Quibi, which will charge about $5 a month with ads and $8 without ads, will face an increasingly crowded video streaming market when it launches next April. Already, there are large subscription platforms like Netflix and Amazon Prime Video, as well as free, mostly ad-supported sites like YouTube and Facebook.

“I do believe there is a legitimate audience for it,” said Tim Bajarin, president of Creative Strategies, a San Jose-based market research firm. “They will be challenged by the subscription model given that (consumers) already have so many subscriptions for content now.”

The company brings together two heavyweights in entertainment and tech — 68-year-old Katzenberg and Whitman, who turns 63 on Sunday.

In many ways, the pair are opposites. Whitman, the company’s CEO, is a former Republican candidate for governor, with a track record of leading major Silicon Valley tech companies like online auction site eBay and Hewlett Packard Enterprise.

Katzenberg, Quibi’s chairman and a major Democratic Party fundraiser, rose up the ranks in Hollywood. After leading a revival of Disney’s animation studio, he built DreamWorks Animation into an industry juggernaut with such hits as “Shrek,” “Madagascar” and “Kung Fu Panda.” (He sold the animation studio in 2016 to Comcast for $3.8 billion.)

The seed of the Whitman-Katzenberg partnership began with a phone call. Whitman had just announced she was stepping down as chief executive of Hewlett Packard Enterprise in 2017 when Katzenberg called and asked what she was doing that night. She guessed correctly that she would be having dinner with him. The mogul flew to the San Francisco Bay Area, and the two met to discuss what would become Quibi.

Katzenberg handles the content side of the business, while Whitman runs the company, including overseeing the product and engineering teams, as well as marketing and advertising.

“We cannot be more different from each other, and the fact that we could find a good partnership in that is now turning out to be the superpower in it,” Katzenberg said. “For me, I always have big plans and lots of dreams and, you know, somewhat impractical, and Meg is buttoned-down, ‘Let’s have this plan, let’s figure out this day everything that is going to go wrong’ kind of person,” he said.

Each cites different reasons for why Quibi will succeed. Whitman points to eMarketer research that shows a steady rise in the average amount of time consumers spend daily watching video on their mobile devices: In 2018, it was 60 minutes, up from six minutes in 2012.

“Increasingly people are watching on their phones, but during the day most people don’t have an hour to sit and watch something on TV,” Whitman said. “The ability to see a great show in a series of 10 chapters — people are going to find that super interesting.”

Katzenberg touts his instinct and track record of providing what audiences want even before they know it.

“I’ve spent my life trying to find stories that you will like,” Katzenberg said. “If I asked if you wanted to see a big movie about a big green ogre named Shrek, you would certainly say, ‘I don’t think so.’”

The duo collaborate daily and don’t always agree. In its original plan, Quibi had considered mining and monetizing data, Katzenberg said. When Whitman looked at the plan, she disagreed with that idea.

“It’s just on the wrong side of history,” Whitman said. “It’s not consistent with our brand and what consumers expect today. We zeroed out that revenue line.”

Quibi’s target audience is people ages 25 to 35, and its larger demographic could include people ages 18 to 44. The start-up is focused on providing videos for mobile phones from 7 a.m. to 7 p.m.

Those videos are separated into three categories: long-form narratives distributed to consumers in short chapters; alternative content, which includes reality, documentaries and food shows, and so-called Daily Essentials, which include daily news such as morning and evening shows from NBC News that target millennials.

Quibi said it plans to make money through subscriptions and ad revenue (executives declined to disclose projections). The company said in its first year it will have an ad inventory worth $150 million and that such brands as Google, Walmart and Proctor & Gamble have signed on. The ads will appear in 6-, 10- and 15-second pre-roll ads before Quibi videos and in other formats. Whitman believes that about 75% of Quibi customers will opt for the $5 monthly subscription with ads.

Much of the money Quibi has raised has gone toward buying content and marketing. The company may raise $500 million more in investment in the fall, Whitman said.

The company plans to amass more than 7,000 pieces of content in its first year. Among the upcoming projects is a modern take on the 2003 romantic comedy “How to Lose a Guy in 10 Days,” which is in development with Paramount TV. Quibi has also lined up major filmmakers including directors Antoine Fuqua, Guillermo del Toro and Sam Raimi.

Filmmakers working with Quibi said the platform gives them more tools to lure audiences, such as the use of ring tones and the ability to have content appear at certain times of the day.

For example, Spielberg wanted his scary series, “Spielberg’s After Dark,” to appear in the evening, so Quibi’s team arranged for his episodes to not be shown on the platform until the sun goes down. Quibi users can also view the videos vertically or horizontally by changing how they hold their phones, which opens the possibilities for filmmakers to potentially change the viewer’s perspective based on how they are viewing the content.

Veena Sud, the showrunner for AMC’s crime drama “The Killing,” is working on a Quibi series called “The Stranger,” a thriller about a ride-hailing driver named Clare whose life is in danger after she picks up a sociopath. The drama follows Clare over 12 hours as she seeks safety. Viewers watch a dozen 10-minute episodes that air one hour later each night.

If viewers choose to like the series on the app, they’ll be notified of a new episode with the same creepy ring tone heard on Clare’s cellphone when she receives a text from the sociopath, Sud said.

“Unlike the traditional screens that we watch TV shows and movies on, this is the screen that is attached to most of our hands 24/7,” said Sud. Quibi allows filmmakers to “break every single wall between you and the audience and to draw your viewer out of passivity into actually being part of the story.”

But there are challenges to writing a story when it’s told in 10-minute chapters, Sud said.

“There can only be so much before it feels really repetitive,” Sud said. “Because there are so many very dramatic episode ends, I had to mix that with other types of questions about who the hell this guy is.”

Hardwicke, whose credits include the first “Twilight” film, said she was impressed at the level of collaboration creatives and techies have at Quibi.

“It just feels like ‘Wow, there are so many cool possibilities,’” Hardwicke said. “They don’t want to say no. They say, ‘Let’s try it.’ ”

Unlike other platforms, Quibi offers a premium price for content and gives creators more flexibility. The start-up is willing to pay up to $6 million an hour for long-form narrative content.

Another appealing feature for creators is they get to own the content after seven years, during which Quibi has the exclusive license. After two years, creators can take that content, put it in a longer form such as a movie and shop it elsewhere.

But some question whether there’s enough demand among millennials to watch premium videos on their smartphones.

YouTube recently changed its strategy for its premium scripted content, with plans to move programs like “Cobra Kai,” a scripted series based on the popular “Karate Kid” movies, out from behind a paywall and instead support them with ads.

Many subscribers of streaming platforms like Netflix also choose to view programs on their TVs, rather than on their smaller smartphone screens. Other platforms, like Verizon’s go90, failed in generating a large enough audience for shows created for mobile viewing.

“The real test comes once the service is launched and socialized with the world of on-the-go customers,” said Jason Squire, a professor at the USC School of Cinematic Arts. “Whether these customers will create a loyalty to any number of their shows or otherwise return to the site consistently — that is the key.”

But Katzenberg says he doesn’t need to get all smartphone users to pay for Quibi. If he got just 3% of the 2.5 billion smartphone users worldwide, “Quibi would be a massive success,” he said.

Quibi, which occupies two floors of a modern office building in Hollywood, looks like a typical tech start-up with an open floor plan. Whitman and Katzenberg don’t have offices and sit in the same space as their roughly 160 employees. Employees have their own lockers. Jars filled with various candies line the wall in the lobby.

The executives take pride in building a diverse company of employees drawn from the worlds of tech and entertainment. The company, which is 52% female, has employees who have worked at companies including Google, CBS, Spotify, Hulu, Facebook and Netflix.

“We have created something really powerful in bringing both the entertainment competency and technology competency together,” said Jim O’Gorman, Quibi’s head of talent and organization.

Katzenberg and Whitman said they are ready for any challenges and will face them together.

“We’re not marking our territory,” Whitman said. “We’ve done that.”

Katzenberg agrees, adding they both have marked enough territory in their lives.

“Here is the single thing above all else that bonds us and binds us together: We have a bottomless well of the need to win and whatever it takes to win,” Katzenberg said. “We just want to win. Big.”